There hasn’t been a single available intensive-care bed in Romania for the past eight days, as Covid patients overflow from hospitals across the country – an EU member state with the highest coronavirus death rate in the world.

But you wouldn’t guess it from visiting Bucharest. The capital’s restaurants are full, schools open, and metros packed. And yet the truth of the disaster starts to unfold when you visit vaccination centres, many of them empty and some now closed. Just one in three Romanians are vaccinated – the second lowest rate in Europe – despite an abundance of clinics and doses.

You enter a hospital, and the human consequences are horribly apparent. In the Matei Balş Infectious Diseases hospital – the first to treat a Covid patient in Romania and considered one of the country’s best public hospitals – the situation is now critical. Patients line corridors in temporary camp beds. The emergency unit has been transformed to manage overflow: consultation rooms now house as many beds as they can fit, mere inches between them, while reception areas and corridors are crammed with more makeshift beds and equipment.

The hospital is 110 per cent over capacity when I visit. Dr Cătălin Apostolescu, its director and a respected infectious diseases expert, tells me that every single one of these 250 severely ill patients is being treated for Covid, and 95 per cent of them aren’t vaccinated.

In a room with three patients, intended for only one, I look out of the window. Two oxygen generators – one small, and one new, and much larger – stand side by side. They are a bleak reminder of the tragedy Apostolescu saw first-hand in this hospital in January, when a fire in the hospital killed 12 people.

There have been three deadly fires in hospitals in less than a year, the last just weeks ago. The country’s hospitals have long been in disrepair and fires on site are, if not routine, then no longer surprising. The extremely high demand for intensive oxygen during the pandemic has heightened the risk even more, and such fires are now a recurring tragedy across a crumbling hospital estate.

Public hospitals have seen few improvements since the fall of Ceaușescu’s communist regime in 1989 – only three state hospitals have been built since. Their aged circuit systems pose a risk, for every doctor and nurse, who must brace themselves each time they place something in a plug socket.

Breakthrough investigations in recent years from Sports Gazette/Libertatea (of Oscar-nominated documentary Collective fame) and Recorder have exposed some of the corruption – found at each and every political level – which has enabled this state of affairs to continue. Recorder recently published footage of University Hospital, where the ceiling begins leaking on a patient as they film. In spite of the public clamour generated by these investigations, little has changed: nurses move the patient, put a bucket in place, and carry on.

Five miles away from Matei Balş hospital, at Bucharest’s Marius Nasta Lung Diseases hospital, the situation is much the same.

The Director, Dr Beatrice Mahler, shows me a queue of ambulances outside the ICU department – a now-familiar sight in Bucharest. As they wait for beds to become available, their drivers sit silently in PPE suits among the deeply wooded grounds.

Staff are burning out and face crippling shortages. We hear this from exhausted health workers over the world – but the problem has been compounded in Bucharest by the exodus of an estimated one-third of Romanian doctors to work abroad, with 28,000 nurses leaving between 2009 and 2015. A pay rise for nurses working during the pandemic was welcome but has not addressed the shortage: as we walk around Matei Balş, an exhausted nurse begs Apostolescu to recruit the staff that are so desperately needed.

“Day by day it gets worse,” Mahler tells me. “It feels like a war.” The hospital is currently treating 123 Covid patients – as against an official bed tally of just 96. A temporary mobile structure, with the state emergency department government logo emblazoned on its side, is attached to the ICU and houses eight severely ill patients. But these emergency structures are not enough: hospitals are now so overcrowded that Hungary announced it would take 50 patients, with more expected to follow.

Both Mahler and Apostolescu note how late these critically ill patients are arriving. Healthcare scandals contribute to a reluctance among the sick to go to hospital. Some assess the risk of fires or bacterial infections killing them in hospital as greater than risk from the illness itself – a calculation which has contributed, in this EU member state, to the fourth highest case-fatality rate in the world.

Just hours after I leave Mahler, she is harassed on the hospital grounds by an elected senator. Diana Șoșoacă streams the entire encounter to Facebook, in which she accuses Mahler of illegally holding dead patients in undignified body bags. Mahler patiently explains that this is the protocol for infected patients who pass away, but is still subject to the tirade from Șoșoacă and her allies for an hour before they leave.

It’s true that morgues are overwhelmed, with the right to dignified treatment of bodies after death increasingly hard to guarantee. At University Hospital, where the morgue is full, pictures emerge of black body bags in corridors. In the northern city of Botoșani, officials announced they’ve been forced to rent an excavator, as graves aren’t being dug fast enough to keep pace with those passing away.

But Șoșoacă embodies a unique context of permissiveness in which Romanian politicians can ensure the spread of misinformation. She has become something of a pariah in parliament – but has still found a sizable audience on social media and talk shows happy to stream her claims to millions.

With two-thirds of Romanians yet to get the vaccine, she’s far from alone. Unlike other nations with low levels of roll-out, Romania’s lagging coverage reflects hesitancy more than lack of supply. A combination of misinformation, poor communication and a deep distrust of the authorities has conspired to create the largest population of unvaccinated citizens in the continent.

Hesitancy runs so deep for some, with corruption in the healthcare system so widespread, that the illegal purchasing of vaccine certificates – so-called “sink vaccinations” – is now reportedly widespread. These phoney documents are advertised on platforms such as Telegram, and enable purchasers to circumvent the requirement to show proof of vaccination in cafes, bars and venues.

There’s some hope that the tide is turning. The vaccines minister, Andrei Baciu, said there’s been a significant uptick in recent days as news channels fill with horror stories from hospitals: whereas 10,000 were being vaccinated a day in summer, he tells me this figure has since tripled. Welcome as this is, it’ll have little bearing on the immediate, extremely challenging fortnight ahead.

And as alarming as Șoșoacă’s intervention at Marius Nasta was, it pales in comparison to the political chaos of recent days. On 4 October, the government collapsed following a no-confidence vote. As the death rate surged to the very top of the global tables, the Ministry of Health remained in limbo, with politicians consumed not with pandemic relief but with protracted negotiations regarding their future careers. Worse, these hours all came to nothing: the prime minister’s eventual choices were rejected by Parliament on Wednesday, with the same theatrics now scheduled again for next week.

New Covid restrictions come into force on Monday – but the only major change will be the closing of schools. The president and the prime minister “wanted to be heroes of relaxation,” says Vlad Voiculescu, former health minister. Prime Minister Cîțu is, in this sense, “a Boris Johnson at the beginning of the pandemic, with less hair” – referring to Johnson’s initial reluctance to lockdown the UK at the beginning of the first wave in March 2020.

The World Health Organization has sent an emergency envoy, who arrived this week, along with close to 200 oxygen cylinders and 34,000 tests. Italy sent 5,200 vials of antibody drugs, and more countries may, in due course, accept patients. All of this will combine to provide some relief – but no fundamental change – to a healthcare system which, when this deadly peak finally fades, will still suffer profoundly from structural flaws. As scientists and health workers in Britain are raising the alarm at our own rising case numbers, it’s worth remembering again just how different it’d be without the remarkably high levels of vaccination we’re fortunate to have.

When we leave Matei Balş on Tuesday morning, stepping outside into the quieter paths on the sprawling hospital estate, I ask Apostolescu about his family. He now lives alone, he tells me, so not taking a day off since August 2019 hasn’t mattered much to anyone – aside from his retriever, Toro, who he misses terribly.

After showing me a photo of this golden dog as his phone wallpaper, he tells of how he’s lately been unable to care for her, and begins to cry. “It’s my choice, you understand,” he says, “every doctor, no matter the speciality, must fight against the brunt of this war. During peace, you can do everything you want, but now, it’s a war.” 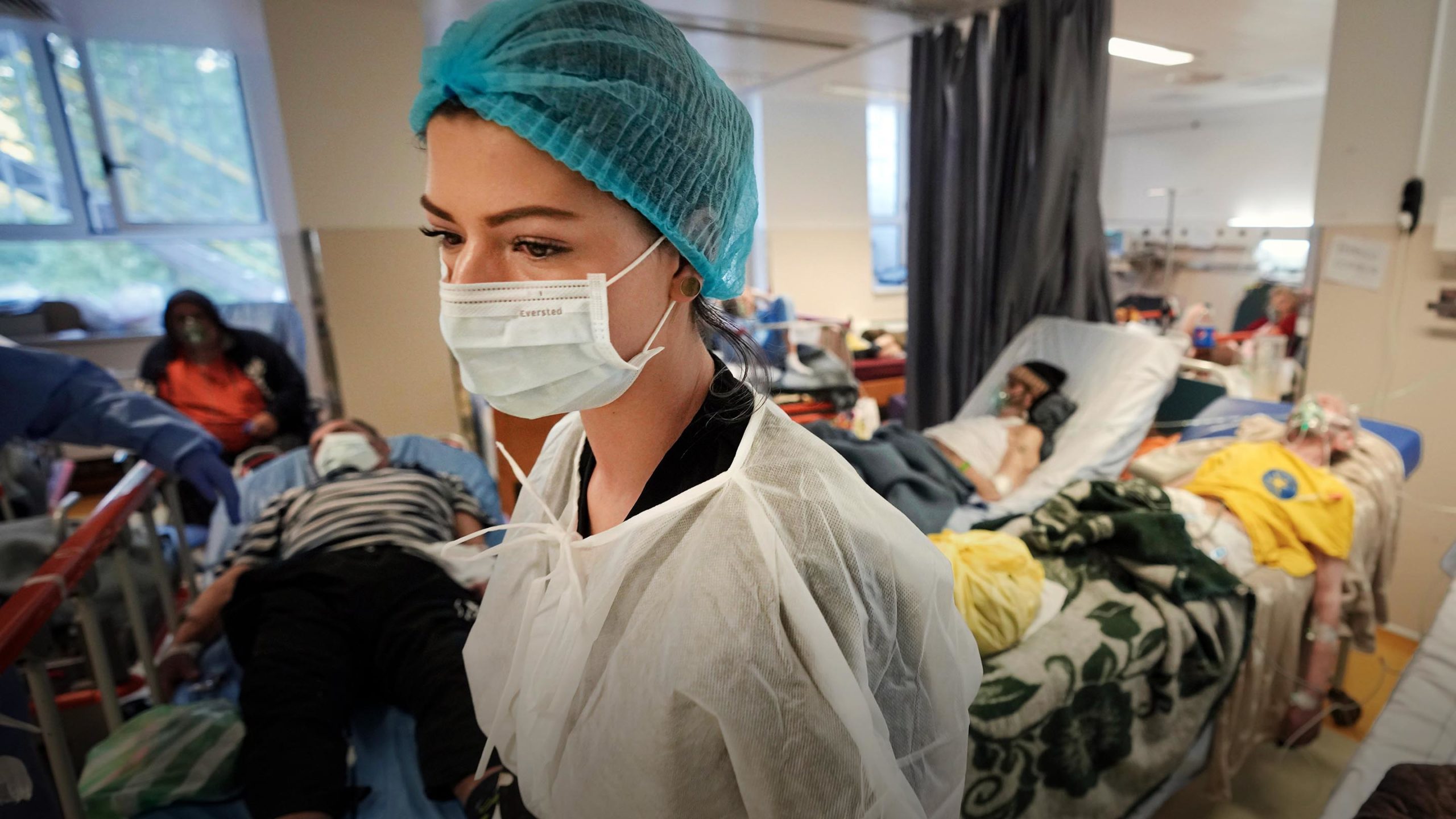 In this second despatch from Romania, Lara Spirit reports on the political and structural collapse that has thwarted vaccine rollout – and the lessons for the rest of the world