On Wednesday, President Biden used his emergency vaccines summit to declare the US an “arsenal of vaccines, as we were the arsenal of democracy in World War Two”.

This bold comparison was permitted by the announcement that the US is to buy 500 million new Pfizer vaccines purchased by the US – and donated to low-income countries. The purchase doubled Biden’s commitment to 1.13 billion doses abroad, more than contributions from all other countries combined.

But the summit itself – convened by Biden covertly, confusedly and in haste – proved in the end to be a convenient point-scorer, which added little clarity to a global vaccination landscape still blighted by profoundly unequal distribution.

On the face of it, the event was a success. The US is now donating three shots abroad for every one shot at home, in addition to $370 million to help administer them. Spain and Italy committed millions more doses to those in need. Biden will host further meetings this year and next, in an attempt to end the practice of unaccountable leaders making undelivered pledges (the World Health Organisation has said just 15 per cent of donations have so far materialised).

He was supported by leaders and non-governmental organisations alike. Justin Trudeau, the Canadian prime minister, and Ursula von der Leyen, president of the European Commission, were among those who lent their support to the new target of vaccinating 70 per cent of the world’s population by this time next year.

Yet it’s nations like Canada and regions like Europe that are among the world’s worst offenders for stockpiling surplus doses. Their leaders were called out yesterday, when the United Nations secretary general, Antonio Guterres, remarked that vaccine inequality was “a moral indictment of the state of our world”, and “an obscenity”. All of a sudden, as Guterres spoke and the video stream cut to the targets of his words, those political big-hitters started to look more like guilty children.

And now they have more reason to feel guilty. On its most fundamental objective – to urgently increase supply to low-income countries – the summit failed. Truly new doses announced at the summit amount to 900 million, a far cry from the minimal five billion needed by the end of the year. Three months since G7 leaders met in Cornwall, and one million further global deaths later, an insufficient number of vaccines has been committed yet again.

Biden called for the roughly two billion donations committed already to be delivered sooner, but there was no plan for how. He teamed up with the European Commission to forge a “Manufacturing and Supply Chain Taskforce”, but this stopped short of including intellectual property waivers, technology transfer hubs, or access pools that could help to create a sustainable path out of the pandemic. And he rightly demanded accountability, but with no whisper of sanctions to give this meaning.

Biden is right that he can’t do it alone. His allies, however, are distracted. As it stands, there’s confusion as to whether Boris Johnson was even present at the event yesterday (his attendance was confirmed, but he wasn’t seen). He’s been busy instructing the world to “grow up” and address climate change, but – as Biden and Von der Leyen announced the new 900 million doses – Britain was conspicuously absent.

True, there’s a lot going on – not least trade negotiations with the US, which the UK hopes will end in a deal. You can’t focus your energy everywhere. But as Johnson himself pins his hopes on the international community shaping up for Glasgow’s Cop26 – just six weeks away – his selective engagement with its most pressing priorities is baffling.

Watching yesterday, it was impossible to avoid the conclusion that millions of lives lost – up to three million by Christmas, according to Airfinity analysis – would have been preventable had Western leaders acted sooner. And yet again, without binding targets for the G20 delegates meeting in October, nor stringent monitoring processes in place, we find ourselves relying on unfounded hope that next time might be different.

Successful campaigns are often criticised for moving the goalposts on what constitutes a win. Our Arms Race campaign at Tortoise, for example, was among those calling for this vaccine summit in a letter to the Financial Times just weeks ago – and it happened. Nearly a billion new doses have been committed and a newly ambitious target for vaccination championed. There will be follow-up meetings this year to come, and more next year. These are all gains, and we should be glad they have occurred.

But we are not shifting the goalposts when we say: none of this is enough. As we have consistently said, the world needs seven billion doses by the end of 2021 and a further seven billion by mid-2022 to prevent both needless deaths and new variants – but look at the actual numbers.

Less than four per cent of people in Africa have been vaccinated, with almost all set to miss the WHO’s target of vaccinating ten per cent by the end of September. Even if you factor in the 500 million Pfizer doses that are being donated, the distribution of those doses won’t begin until 2022, when, by current predictions, we’ll have missed the WHO’s target of vaccinating 40 per cent of the global population already.

In a briefing the night before the summit, a senior White House official said that this event “is meant to be a deliberate beginning to the end of the pandemic”. 20 months into this pandemic, the wealthy, largely vaccinated Western world must ask itself why this beginning didn’t happen much sooner. 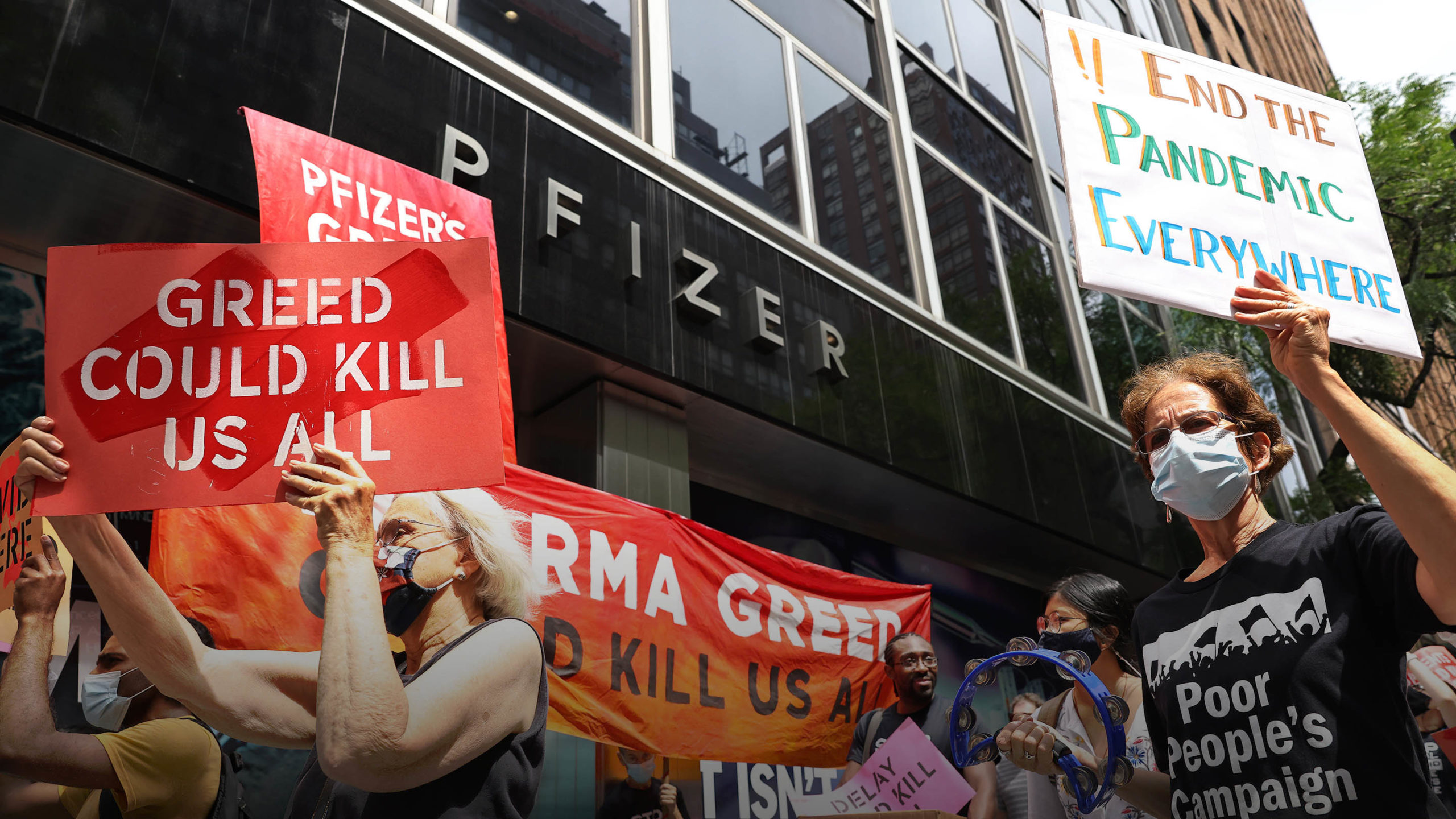 As pension and insurance policy holders, we can all bring pressure to bear on the funds that invest in Big Pharma – and help force the drug companies to address the scandal of vaccine inequality