Various studies now suggest that the Covid immunity conferred by the Pfizer vaccine declines over time. Perhaps by as much as half over just four months

“Vaccines still effective against Delta variant of concern.” That was the headline of a press release about a study published by Oxford University last month, which found that two doses of Pfizer-BioNTech and Oxford-AstraZeneca are still largely protective against infections, despite the new variant. But, buried in the report, some of their other findings aren’t quite as rosy: they suggest that Pfizer’s immunity wanes over time – and rapidly.

Specifically, Pfizer’s efficacy against new infections reduces by 22 per cent every 30 days after the second dose in people aged 18-64. The study, which surveyed over 300,000 people and was produced in partnership with the Office for National Statistics’ Covid-19 Infection Survey, did not find similarly conclusive evidence that AstraZeneca’s overall efficacy against infection is waning over time.

For Pfizer, this means that protection against Covid-19 infection could halve after just four months. Something similar goes for symptomatic infections and cases with a high viral load – i.e. those that are likely to be more infectious. After about three months, the study found that the Pfizer and AstraZeneca vaccines were similarly protective against these sorts of cases.

Dr Koen Pouwels, lead author of the study, is not particularly surprised by the findings; with some exceptions, all vaccines start to wane over time. But, he says, “It’s really hard to study this really well.”

We often talk about vaccine protection in terms of the number of antibodies we have – more Covid antibodies means more protection against the virus. But it’s not that simple. According to Dr Pouwels, a decline in antibodies doesn’t necessarily mean a decline in protection from the vaccine, which means that antibody studies aren’t enough to test immunity levels in the community. That’s why large surveys that randomly sample people from the general population are useful in helping us understand vaccine durability; by measuring cases of re-infection, they paint a real picture of immunity in the community.

Another reason Dr Pouwels isn’t surprised by his findings is because the question of Pfizer’s durability has been in the air for several weeks. In July, the Israeli health ministry said that Pfizer was just 39 per cent effective at protecting against infection four months after the second dose, and just 41 per cent effective against symptomatic infection.

The majority of Israel’s population was vaccinated with Pfizer after the government agreed to share data with the manufacturer in exchange for vaccine doses. It’s touted as one of the world’s fastest national rollouts – 84 per cent of the country’s over-70s were vaccinated by February. However, the Israeli health ministry’s July efficacy figures were met with scepticism by health experts and the general public alike; they were based on data from an unspecified number of people and had not been peer reviewed. The data was also prone to bias – those vaccinated early were already older or otherwise vulnerable to disease.

Since then, other studies have tentatively suggested that Pfizer’s strength against infection weakens over time. Data from the UK’s Zoe Covid Symptom Study also found that Pfizer immunity dips after five to six months, from 88 per cent to 76 per cent – a slightly faster drop than AstraZeneca, which fell from 76 per cent to 66 per cent over the same time period. Tortoise understands that this data is preliminary; the Zoe team was not available for comment.

Two more pre-print, not-yet-peer-reviewed studies have emerged with similar findings. A paper based on data from the Mayo Clinic hospital chain in Minnesota found that both Pfizer and Moderna saw reduced effectiveness against infection over the six months between February and July; Moderna from 91 per cent to 76 per cent, and Pfizer from 89 per cent to 42 per cent. Once again, we must be cautious with the findings: the period covered also saw Delta take over from Alpha as the predominant variant, which could be a factor in the decreased efficacy.

The second study, from Qatar, found that Pfizer vaccine effectiveness against infection peaked at 72 per cent, five weeks after the second dose, and declined consistently thereafter, reaching “diminished levels of protection” by the four-month mark.

One reason for the differences between the Pfizer and AstraZeneca vaccines, says Pouwels, is the different structures of the vaccines themselves – AstraZeneca is produced using a weakened form of the virus, while Pfizer is an mRNA vaccine, using only the virus’s genetic code.

So what’s next? In Israel, a booster scheme has already begun. 2.7 million people – nearly a third of the population – have already received a third jab of Pfizer, and early studies suggest that the jab is boosting immunity in those who receive it.

We shouldn’t necessarily look to Israel for answers on vaccine policy, though. “It’s important to distinguish between systemic immunity – so immunity against severe disease – and immunity against infection in the first place,” says Dr Pouwels. With the advent of Delta, the vaccine seems to provide slightly less protection against symptomatic disease, but it does appear to protect against hospitalisation and death.

In Israel, both hospitalisations and deaths are on the rise, but we can’t necessarily attribute that to the vaccine losing efficacy. Israel is less rigorous than the UK in the testing of its population, “so then the apparent difference between number of infections and hospitalisation might be a bit misleading”. Specifically, Israel may have a poor understanding of just how many unvaccinated people are actually infected – not least because the same people who are resistant to getting vaccines are sometimes also resistant to testing.

Israel also jabbed most of its population using short intervals between doses, which may be one of many factors contributing to the differences in the data. “Antibody responses are better among those on a slightly longer dosing interval than among those on a three-week schedule,” says Dr Pouwels.

The authors of the Oxford study are not yet calling for boosters in the UK. “Whilst protection against hospitalisation and death is maintained, ‘booster’ vaccinations may not be needed, particularly since infection post vaccination may provide a natural antibody boost,” they say in their conclusion.

The UK, which has delivered millions of Pfizer jabs, is still under pressure to follow the lead of Israel and the USA. Two weeks ago, it ordered 35 million doses for the second half of 2022, bringing its total Pfizer order to 135 million doses. That’s more than any other country in the world. EU member states, which have handed out 382 million doses of Pfizer – representing 73 per cent of total vaccines administered – are also mulling boosters.

A key question is whom the boosters will actually help. If hospitalisation and deaths rates are not yet increasing, third doses may be a waste of valuable resources – particularly as just two per cent of people in low-income countries have received but a single dose of the vaccine. Fewer vaccines mean more possibility for infections, and therefore a greater likelihood of deadly, more transmissible, or more resistant variants. That puts us all at greater risk.

When we’re talking about who benefits, however, no one comes out of this better than Pfizer. The manufacturer is expected to make $33.5 billion in 2021 from vaccine sales – that’s about $10 billion more than AstraZeneca’s annual global turnover in 2020. Booster schemes would boost sales, too. 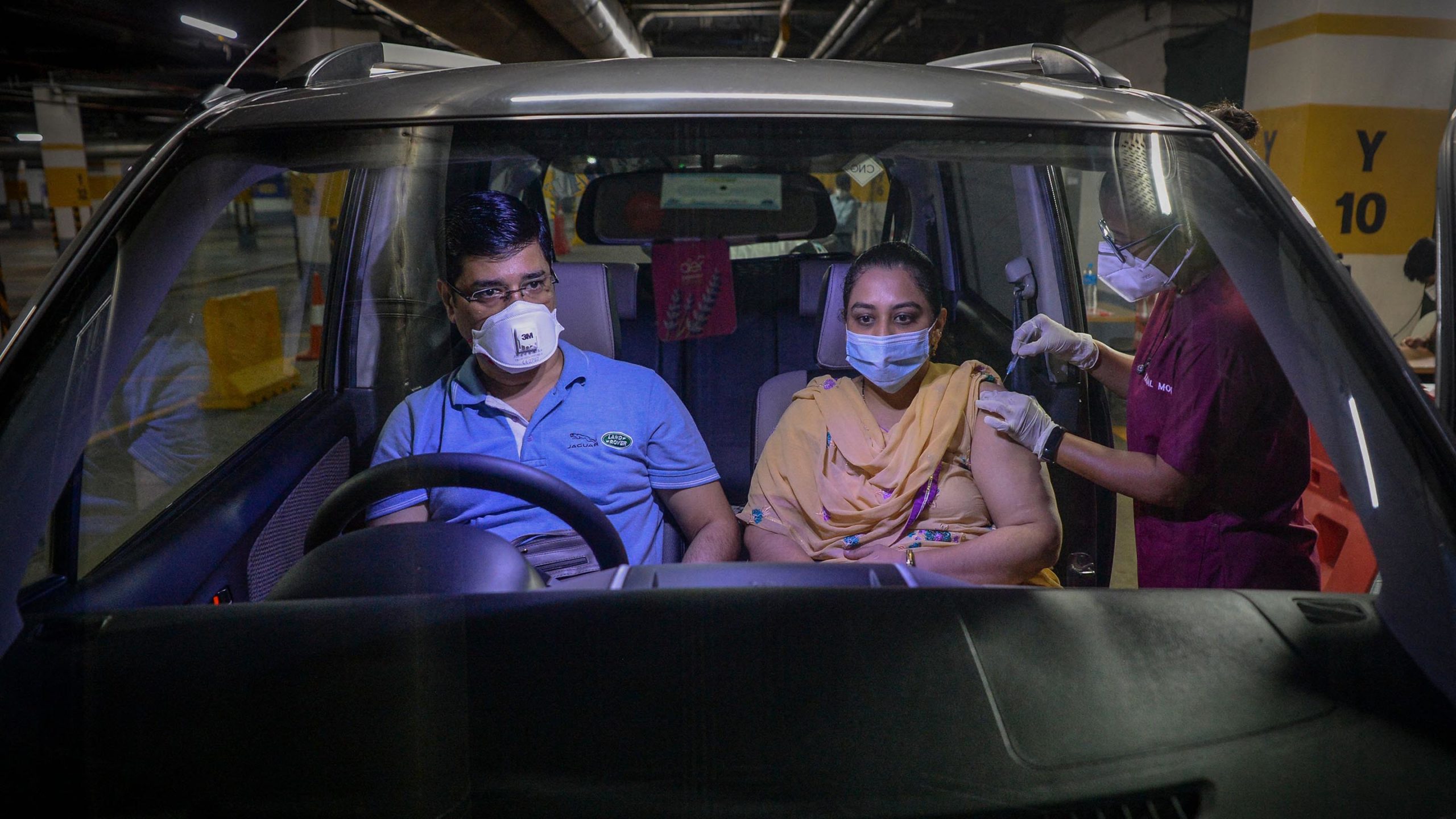 Delta is surging through both vaccinated and unvaccinated populations – increasing the risk of new mutations, and subjecting many to Long Covid. The solution must include protection, tests and treatments