Part II Happy passes the ‘mirror test’, an examination of intelligence and self-awareness

This is the second part of our story about Happy the elephant. In the first episode, we heard how seven baby elephants packed their trunks and sailed across the Pacific to America, where they were split up and sold to different zoos and circuses. Three of the original seven died early. Two now perform in a circus, one lives in Oklahoma, and our heroine, Happy, is at Bronx Zoo, where she has lived, alone, since 2006.

Now, we are focussing on her incredible journey – from the forests of Thailand to a grand stuccoed courthouse on Madison Avenue and, who knows, maybe to the green hills of an elephant sanctuary in Tennessee, if her lawyer has his way.

But what’s important about Happy’s story – why we are delving into it now, in the middle of a global pandemic, an unprecedented economic crisis and what is probably the most-crucial American election of our lifetimes – is that it matters. It could crack open a fundamental faultline in our relationships with animals: between the way we have lived up to now, and the way we will live in the future.

This faultline, this potentially seismic change, will come about through understanding how animals think and feel. The more we learn about them, the more we are starting to appreciate how they might be more like us than we thought. And, if they are, can we treat them so differently? Can we lock them in cages, barns, or small enclosures, like Happy’s?

In this episode we will try to get inside an elephant’s brain, in an attempt to understand how they think, communicate and feel. And we will learn how an elephant named after a Disney character came to be at the centre of a legal and philosophical storm.

I remember pretty vividly actually that basically every day in the middle of the summer, uh, early in the morning, I would meet, uh, Dr. Diana Reiss, who is my colleague and collaborator on that project, um, at the entrance to the elephant barn.

This is Joshua Plotnik, a professor of psychology and the man who, unwittingly, kick-started the battle over Happy’s future.

And then we would go up onto the roof, where I just remember it being like one of those flat tar roofs where the elephants were in the barn beneath us. And so just the reflection of the sun off of the roof and off of us was, was incredibly hot. But it was really exciting because I had never had a chance to do research on elephants before, in fact I had probably never even been that close to an elephant.

Josh, together with Diana Reiss, an expert in dolphin cognition, was at the zoo to carry out, for the first time, a mirror self recognition test on an elephant. The MSR – or red dot test as it is sometimes known – was designed in 1970 by Gordon Gallup Junior, an American psychologist. His inspiration came from an anecdote Charles Darwin told about meeting an orangutan named Jenny in London Zoo in 1838. Darwin had watched as Jenny threw a hissy fit after her keeper teased her with an apple. He then observed her looking into a mirror – and it made him think about what it might be like to be an orangutan, and whether she might have recognised herself in the hairy, saggy-breasted, orange-tinted ape gawping at her. It made Gallup wonder if the mirror on the cage wall might provide a way to measure an animal’s self-awareness.

He designed a test:

What does it mean to be able to recognise yourself in a mirror? It’s something that had little or no adaptive value during human evolutionary history, mirrors were few and far between…

Being able to recognise yourself in a mirror, however means that you’re capable of realising that it’s your behaviour and not the behaviour of another person that’s depicted, when you look at and interact with the mirror. So it’s an index or a proxy for self awareness, right?

The theory goes that, having got acquainted with a mirror, a self-aware creature will notice changes in its appearance. Gallup’s first guinea pigs were, in fact, four adolescent chimpanzees. A mirror was first placed in their cages and, once they had had a chance to examine it, they were anaesthetised while marks were painted on their face using red dye. When each chimp came to, Gallup watched as it looked at itself in the mirror. If any of them touched or gestured to the new red mark, this was an indication that it knew something was different and, by touching it, realised it was looking at itself in the mirror.

Only individuals from a few species have passed the mirror test: chimps, bonobos, dolphins, killer whales, orang-utans and magpies – what are generally regarded as the smarter animals. A human child is typically aged between eighteen months and two years when she – or he – clicks that she’s looking at herself.

And so, back to the hot summer of 2005, to the roof of the elephant barn in Bronx Zoo with Joshua Plotnik looking down on a very large mirror.

And they, they approached it very, very quickly and also very relaxed, which is not necessarily what you would expect most animals to do. You expect them to be apprehensive, to show a social response to a strange elephant they’d never seen before, which is definitely at least something we’d expect from these elephants because they live in a zoo and they don’t have options to see any other elephants besides Happy and Sammy…

All the elephants at the Bronx Zoo got an opportunity in front of the mirror, including Maxine, Patty, and Happy’s new companion, Sammy. But that ebullience and domineering behaviour that led to them attacking Grumpy in the first episode? Well it is on show here. Happy, the more retiring elephant, hangs back.

They went right up to the mirror, so we were really excited by that. And then I remember that within the first few minutes, or certainly within the first 30 minutes, the elephants were doing a lot of really close mirror inspection. So they would touch the mirror very closely with their trunks and then there was a lot of over the mirror, trunk smelling, and one of the elephants actually got down on her front legs, on her knees and smelled underneath the mirror. And I remember Diana grabbing my arm when that happens, because we were both so excited and surprised by the fact that they were not only so interested in the mirror, but this to us was a telltale sign that the elephants were trying to figure out what was going on in or behind the mirror.

And then by day two and three the elephants are doing what we call mirror testing behaviours. So they’re, they’re moving their heads in and out of mirror view as if they’re asking themselves, “you know, why is that elephant doing what I’m doing?”, very anthropomorphic, but it’s a good way of trying to kind of picture what they might’ve been thinking.

And then when they moved to self directed behaviour, that’s when we were really, just, you know, ecstatic. The fact that they were getting really close to the mirror, they were opening their mouths, they were pulling on their ears, behaviours that you would not expect them to do in a social context.

And so that told us that these elephants recognise themselves…

Chimpanzees, interestingly, often turn round and bend down, using the mirror to investigate parts of themselves that usually remain private. The elephants, unsurprisingly, did not.

The elephant-sized mirror was taken out of the enclosure at Bronx Zoo. The keepers then painted a mark – a big white cross – on one side of each elephant’s face, and a cross in invisible paint on the other side (the paint they used was non-toxic, Halloween paint, they were at pains to stress). The invisible mark was there as a control, to make sure that the elephants wouldn’t be reacting to the feeling of the cross.

Maxine and Patty were not that interested in the mark, but Happy, Happy was an elephant that went to the mirror did a lot of close eye inspection, meaning she got very close with her eye. She walked away and when she was away from the mirror, she reached up and touched the mark a few times. And then later in that session, she went back and then in full view of the mirror, she reached up and made a very clear touch of that X on her face.

So that attention to that white mark on her face while not paying any attention to the invisible sham mark that we have put on the other side of her face to control for non visual cues that may have gotten her interested in the mark, again that’s the exciting moment when an animal passes, the mark test and Happy was the first elephant that had passed this test.

Happy was immortalised. Her story was told in the pages of august scientific journals and in newspapers around the world. Although Josh is the first person to emphasise the limitations and uncertainties of the mirror test, Happy’s achievement in passing it has – inadvertently, as with so much of her life – led to the storm that is currently swirling around her. 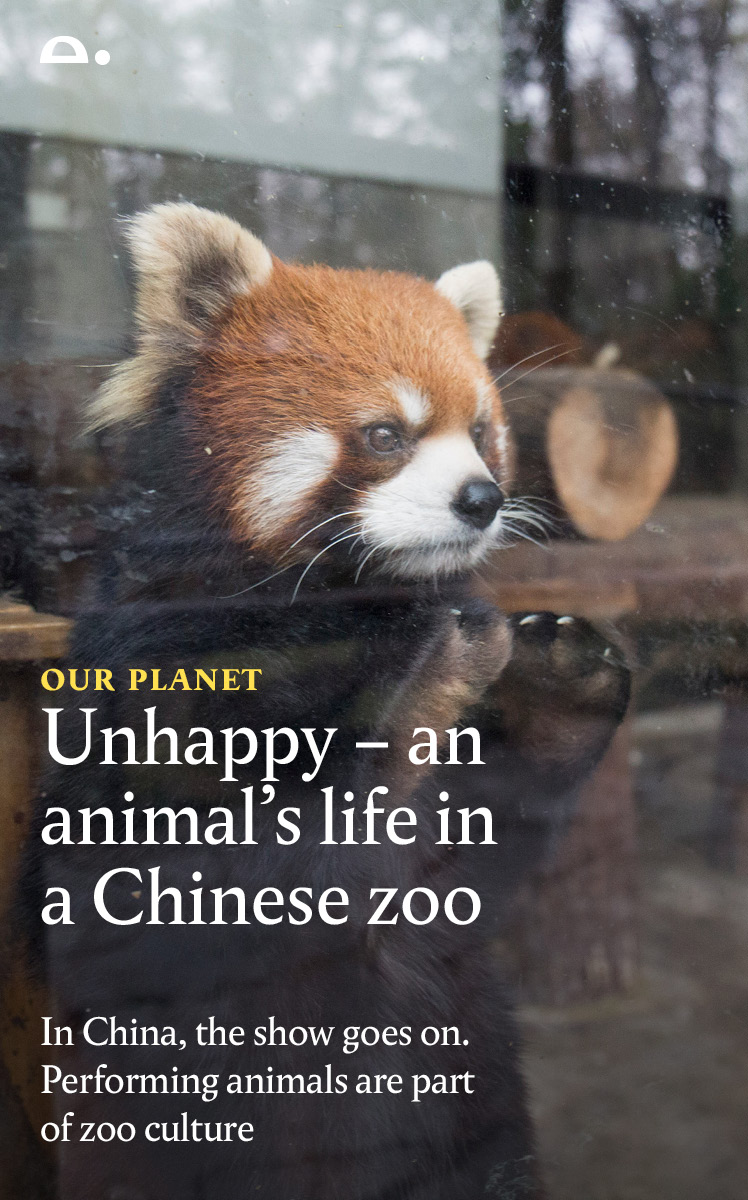 Unhappy – an animal’s life in a Chinese zoo

Unhappy – an animal’s life in a Chinese zoo

In China, the show goes on. Performing animals are part of zoo culture