“No-one is safe until we’re all safe.” Yeah, right. How often during the pandemic have we heard this (initially sound) proposition repeated as a political mantra? So often, I fear, that it is losing whatever impact and true meaning it might originally have had. In the death zones of India, Brazil, Nepal, or Peru, it has not the slightest resonance.

Every time this slogan is uttered – by a head of government or the leader of an international organisation – we are meant to be reassured and to feel that the global response to Covid-19 is well-organised, focused and in good shape. Alas, this impression is mistaken.

Don’t misunderstand me. The international community is certainly busy. The 74th World Health Assembly, the flagship event in the global health diplomacy calendar, was held between 24 and 31 May. The G7 leaders’ summit starts on Friday in Cornwall. There are new treaties, frameworks, institutions, investigations, and vaccine plans in the offing.

Yet it is important to identify the mismatch between all this frenetic diplomacy and rhetoric, and the hard, granular business of fighting the current pandemic. In truth – and contrary to what they say in public – the leaders of most leading nations, especially those with a well-advanced vaccine roll-out, are more preoccupied with the next plague (or investigating the precise origins of this one – a fraught geopolitical question). For all the talk of “vaccine equity” and global solidarity in public health policy, the practical measures that have so far been promised, let alone implemented, fall very far short of such objectives.

This barely concealed inertia is a huge mistake, courting the risk that the mutation of the present virus will achieve vaccine escape as it runs riot in unvaccinated countries. Worse, it will, in practice, leave billions of people at risk of infection and death: an unconscionable outcome.

Rhetoric aside, what needs to be done? If global vaccination is to outpace the virus, it must be just that: global. And to achieve this, the whole approach to vaccine equity needs to be rethought. Covax – the multilateral funding model for research and development of vaccines and their equitable delivery – has been successful in mobilising the development and acquisition of the vaccine.

Yet, as Tortoise argued in its Take last week, Covax’s plan for the distribution of the jab is a failed charity model that was doomed from the start. The history of public health and international development shows that such models, dependent upon national governments stumping up cash, always fall short.

Nor was Covax able or indeed authorised to impose any sort of order upon the procurement of vaccines by individual nations. In an entirely predictable free-for-all, plenty of states pledged to serve the global effort, while devoting most of their efforts to bilateral deals that served their domestic populations; leaving poorer countries to wait for the leftovers or crumbs of charity. In the strategic – as well as the deeper moral – sense, vaccine nationalism is, by definition, a woeful act of self sabotage. But this has not stopped states from stockpiling much more vaccine than they need.

To jab the world, the international community needs to take two bold steps. First, it must waive intellectual property (IP) patents related to Covid-19 vaccines, therapeutics, and diagnostics. In fact, World Trade Organisation rules already allow for IP waivers in times of health emergency or crisis: so far, over 100 of the WTO’s 164 member states, including the US, have backed such exemptions during this pandemic. Second, Covax resources and funds from the OECD’s development wing must be deployed to support states to manufacture and supply their own vaccines.

Opponents of a waiver always cite complexity: vaccines are complex, manufacturing is complex, supply chains are complex. Leaving aside the discriminatory undertones of such an argument (the implication that poor countries cannot deal with complex science, or the will to develop infrastructure), the international community has the resources, personnel and know-how to assist with any such shortfall.

We should be urgently mobilising the expertise of Covax and of its parent institution Gavi (formerly the Global Alliance for Vaccines and Immunization) – an organisation that has been busy at the coal-face of vaccine delivery for decades – to do this work.

Gavi already has networks in low and middle income countries that can play a significant role in identifying and enhancing capacity, enforcing regulatory standards and finding ways of getting jabs into arms. There is greater local knowledge and human infrastructure waiting to be used than is generally acknowledged: we should build on the existing community models of vaccine delivery that have already arisen from mass immunisation campaigns – notably in the fight against polio. There is no need to reinvent the wheel – only an absence of political will on the global stage to make it turn effectively and promptly.

The key to success is to think globally and act locally. It is a tried and tested adage of public health policy that pandemics and health emergencies are stopped in the community. If this sounds like a platitude, it absolutely isn’t. During an emergency of this kind, global and national health institutions instinctively cling to power: their readiness to decentralise and delegate declines sharply, almost by reflex.

Think back to the first days of the pandemic: the pressure upon heads of government the world over to seize control and get a grip was immense, and their characteristic response was to nationalise the crisis and to issue a raft of instructions to local agencies.

Up to a point, this is necessary: a considerable measure of central coordination, leadership and oversight is needed to respond to a health emergency on this scale. But it is not sufficient. In the final analysis, collaboration between national, regional and local authorities is much more effective than central diktat.

The most obvious reason for this is the capacity of local agencies to detect and respond to outbreaks as they happen, and to make use of local knowledge and data. Think of the use that the Greater Manchester mayor, Andy Burnham, made of local public services during the debacle of national test and trace, and the extent to which vaccine roll-out in the UK has depended upon the data held by primary care networks.

Local public health teams, GP surgeries, community contact tracers, the local gossip network: all are essential in the hard yards of a pandemic strategy. In normal times, most health systems in the world operate, to a greater or lesser extent, on the basis of decentralisation.

Hence, one of the paradoxes of health emergencies. The politically inevitable urge to centralise also risks a loss of contact with, or an unnecessary replication of, the local agencies that are already hubs of hard-won trust, local knowledge and key neighbourhood relationships.

This principle is as true in poorer nations as it is in those of the G7. The networks embedded in local communities are vital to the perennial “last mile” challenge of getting vaccines from the tarmac into people’s arms, and driving transmission rates down to 0.

By the same token, it is usually best when diagnosing problems and difficulties in the delivery of a public health emergency strategy to start at local level: this applies to lack of adherence to public health measures, vaccine hesitancy, ineffective messaging and communication, and malfunctioning test, trace, isolate and support systems.

Irrespective of wealth and geography, the history of public health interventions shows that community problem solving is often the most effective way of addressing what may, from a capital city or the HQ of an international agency, appear to be intractable problems. Trust is built within and between communities, not by the UN, or by central government. Indeed, interventions by actors perceived as foreign, or of no interest or benefit to the community, will often be met with distrust and ignored. This is so from Kerala to Keele to Kinshasa.

Indeed, how could it be otherwise? The longer the crisis lasts, the clearer it becomes that many governments have employed a false dichotomy in drawing such a sharp distinction between “primary” and “secondary” questions.

For example: self-quarantine or self-isolation are an essential part of track, trace, isolate, and support. Yet, more often than not, governments focus on track and trace as central to the emergency response, and then lose sight of isolation and the support that is necessary for it to be possible at scale.

People do not self-isolate when they cannot afford or are scared to do so. This requires an integrated approach that combines social welfare and support services, new economic incentives and state interventions that cover the cost of staying at home, while also maintaining job security in the immediate and long term.

It should go without saying that states must sustain financing to humanitarian and specialised aid agencies. At a very minimum, this requires maintaining current levels of funding – the opposite of what Rishi Sunak did in his last Budget – and, where possible, increasing aid to the key organisations. What the international community must absolutely not do is cut funding to essential aid agencies at the height of a major pandemic, whatever domestic arguments are made for cutbacks in what will surely be economically-straitened times.

Finally: foreign military assistance should be a last, not a first, resort in pandemic response. Except in parts of the world where the armed services run hospitals or have a history of close involvement in handling epidemics, military collaboration should only be countenanced when an outbreak becomes the gravest of crises and completely out-runs the capacity of a health system or government.

Context is hugely important in this respect; so while the military may have a presence in the African Union’s regional response to the pandemic, it would be counter-productive to expand the remit of defence alliances such as Nato in Europe or North America. And where military actors or peacekeepers do get involved, they must be closely monitored as potential spreaders of disease as they cross borders. In this respect, we should follow the Cuba model: the only brigades the international community should think about sending to other countries are medical ones.

Covid-19 is an extraordinary crisis that needs to be matched with extraordinary international politics. Within domestic borders, the pathogen has prompted the aggregation of extraordinary state powers – not always for the good, given some of the human rights abuses that have taken place and authoritarian measures that have been passed using coronavirus as a pretext.

All the same: the pandemic has been a reminder of the power of states to do things and to take radical action. It has demonstrated what politics, government and diplomacy are really for. It is time to deploy the same power – at global level.

Sophie Harman is Professor of International Politics at Queen Mary University of London, with a specific interest in global health.

The G7 summit must make global vaccine roll-out its highest priority. Covid respects no border, and will continue to mutate until the citizens of all nations – rich and poor – are vaccinated in high numbers 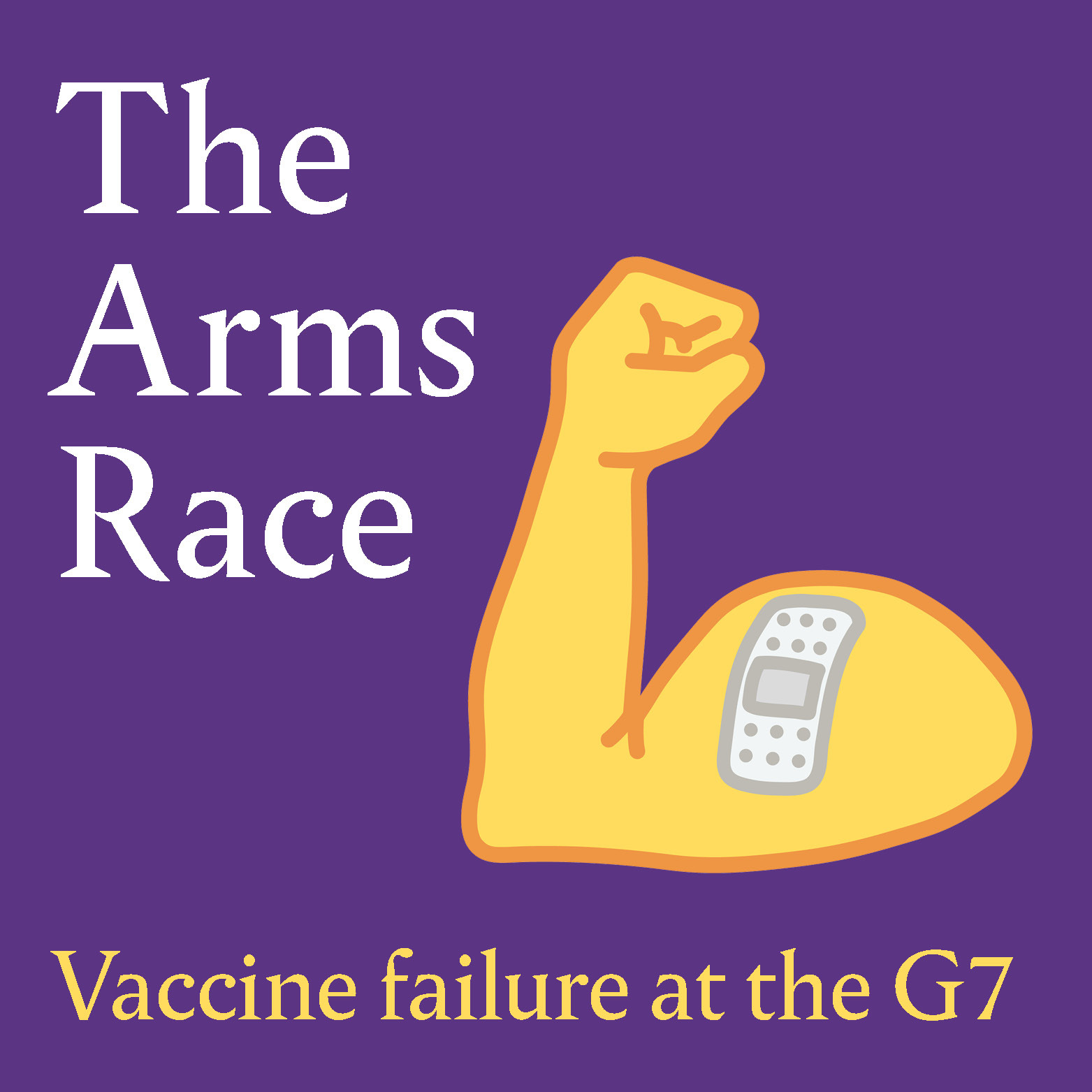 Last month the richest nations on the planet squared up to its greatest public health challenge, how to vaccinate every adult everywhere against Covid. They failed. The story of how and why they came up catastrophically short is a litany of political parochialism, low ambition and poor organisation – with potentially dreadful consequences