If you want to get the measure of John Cassavetes’ Shadows, simply watch one of its street scenes about five minutes in. There is the actor Ben Carruthers, all sunglasses and jitters, loping along a real New York sidewalk, dodging real New York pedestrians, and flapping at real New York pigeons. In the background is a cinema with a hoarding for The Ten Commandments, Cecil B. DeMille’s latest Biblical epic, with a cast list as lustrous as its Technicolor cinematography. The two movies, you realise – the one you are watching and the one showing in that cinema – couldn’t be more different.

Then consider the context. About a year before the release of Shadows, Cassavetes – himself an actor, but already experimenting with cameras – wrote an article for Film Culture magazine in which he declared: “Hollywood is not failing. It has failed.” For him, the big, expensive spectacle of a film like The Ten Commandments was proof that money, not art, nor truth, ruled in Tinseltown. The artists and truth-tellers must strike back.

Shadows was Cassavetes’ bomb. It was filmed sporadically and inexpensively across a couple of years. The camera was a small 16mm number, spooled with basic black-and-white stock. The actors were from or from around Cassavetes’ acting workshop, donating their actual first names to the characters they played. The set was the city itself, from its coffee houses to its cramped apartments, with no permits given – or requested – for filming.

Then there was the plot, inasmuch as there was a plot. A girl, Lelia (Lelia Goldoni), sleeps with a guy, Tony (Anthony Ray), but he ends up fleeing on wings of bigotry as soon as he realises that she’s Black. Later, she faces rejection of a different sort, from a man more affronted by her independence than by her colour.

Sex and issues of race weren’t alien to the screen before Shadows, even in the 1950s. Neither were productions made on the hoof and on the cheap by would-be film-poets. But the particular combination and intensity of Cassavetes’ materials led to something new and volatile. And it exploded.

15 November 1959 is the official date of Shadows’ premiere (“official” because a different cut, one of cinema’s great white whales, had been screened a year earlier). It was double-billed with a short film that was similar in spirit but lesser in quality: Robert Frank and Alfred Leslie’s Pull My Daisy, starring such prominent members of the Beat Generation as Jack Kerouac and Allen Ginsberg. And it all happened at a subversive Manhattan film society called Cinema 16, which counted folk like Marlon Brando, Susan Sontag and Norman Mailer among its attendees.

Whoever was there on that particular evening, they were treated to quite a show. According to Cinema 16’s founder, Amos Vogel, quoted in J. Hoberman and Jonathan Rosenbaum’s Midnight Movies, there was “outright booing and hissing” from the audience, as well as a “long and pronounced ovation”. Which is to say, some hated this riposte to Hollywood filmmaking, some loved it. These passions spilled out of the theatre and into New York’s film journals, newspapers, bars and, well, its culture.

Some people say that the Shadows premiere was the birth of independent cinema in the US. In any case, it’s striking how many avant-gardists subsequently came to prominence in the 1960s – Jonas Mekas, Ron Rice, Jack Smith – before their methods were co-opted by the major studios at the end of the decade, in movies such as Easy Rider. Martin Scorsese reveres Cassavetes and Shadows because they helped him understand that “cinema could be made anywhere”.

As for Cassavetes, he carried on making movies his way, in an extraordinary run that stretched from Too Late Blues in 1961 to Love Streams in 1984. And he funded them, at least in part, by taking roles in Hollywood productions. He’s Rosemary’s husband in Rosemary’s Baby, for instance. Or the troublemaking Franko in The Dirty Dozen. With so much money sloshing around the big-time movie business, better that some of it is put to good use.

Peter Hoskin is an editor at Tortoise 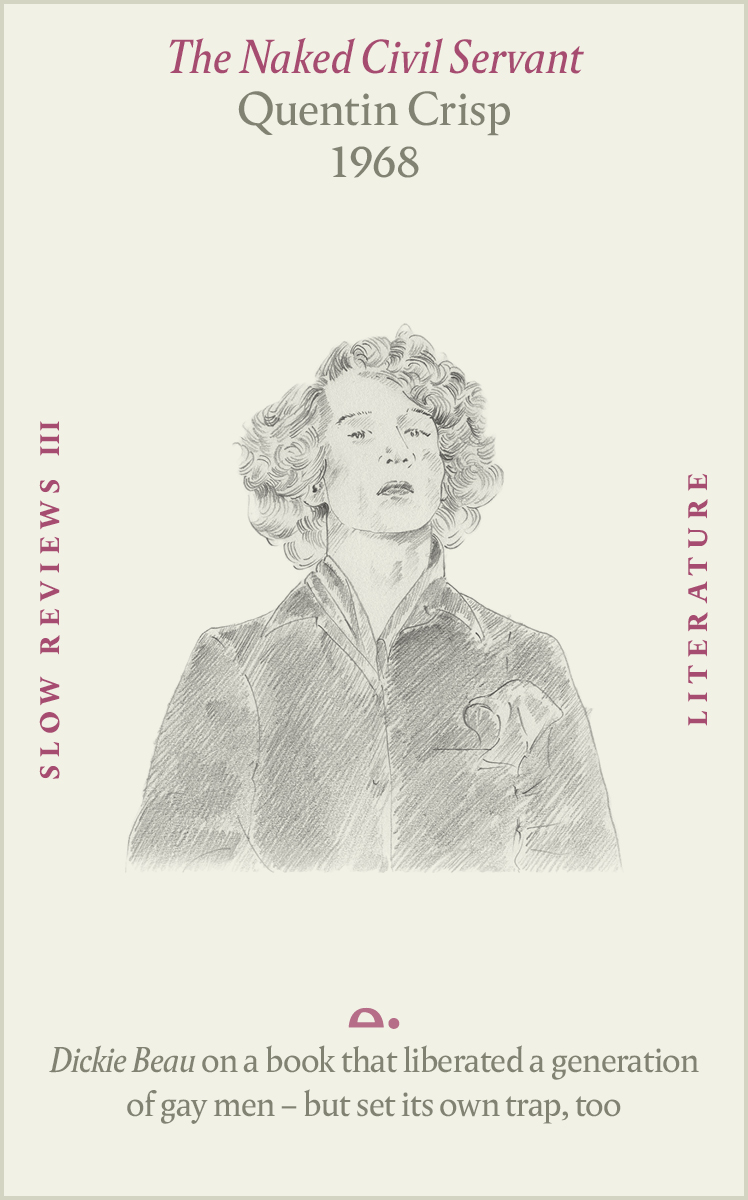 Dickie Beau on a book that liberated a generation of gay men – but set its own trap, too