There is no ‘Fortress Britain’ answer to virus mutation. It is domestic measures – especially a test, trace and isolate system worthy of the name – that will determine success or failure

Get a handle on your borders if you want to identify and stop the spread of new Covid-19 variants. That is the conventional wisdom in March 2021, and one we have heard repeated time and again on the airwaves since the disclosure at the weekend that the P1 Brazilian variant of the virus has been detected in this country.

Of course, border management is easier said than done – for some states more than others. The UK is fixated on when its own citizens can get out – on summer holiday or on business – and on the developing mess over quarantining, tracking and providing necessary support for those who come in.

The emergence of new variants of the virus inevitably compounds political pressure to “get tough” on all aspects of pandemic response – but especially border control. And yet, here’s the thing: the practical outcome of such hasty measures, when they are taken, is often discrimination, stigma and human rights abuses. And, to an extent that is woefully under-appreciated, border control of this sort is exactly what the World Health Organisation urges governments not to do – of which more shortly.

You would think that such restrictions and travel bans during a pandemic were a no-brainer. Viruses, after all, spread from country to country via people and livestock. To stop this, it surely follows that you stop people from coming in, impose additional controls on livestock, and – when you do admit people to your territory – isolate them until they can prove they represent no epidemiological threat.

At the start of a pandemic, most states err on the side of caution and take restrictive action – conscious that a visible, urgent response is essential to public morale. Temperature checks, random testing, hand washing and the installation of sanitation stations are quick and effective border measures. Once people are in, robust test, trace and isolate measures are fundamental.

The reality has been messier. In February 2020 I sweated through the mandatory body temperature check at Lungi International Airport in Sierra Leone, to arrive back at Heathrow to little more than a poster telling me to wash my hands. As it happens, the last time I had made this journey in 2015, I was taken to a special room in Heathrow to go over any potential risk of Ebola. I was given a bottle of water, a number to call and sent on my way. It is not that the UK cannot do border checks. It is just that it does so pretty arbitrarily.

How then to reconcile what appears to be common sense – “shut the borders!” – with the guiding health law of the global institution tasked with preventing and stopping pandemics like Covid-19? Article 43 of the International Health Regulations (IHR2005) emphasises how any “additional health measures” (commonly interpreted by global health scholars as travel and border restrictions), “shall not be more restrictive of international traffic and not more invasive or intrusive to persons than reasonably available alternatives that would achieve the appropriate level of health protection.” In addition, any state that does introduce such measures has a duty to report them and the scientific rationale behind the decision to the WHO within 48 hours of doing so. In February 2020, Tedros Ghebreyesus, the Director General of the WHO, invoked Article 43, clearly stating: “There is no reason for measures that unnecessarily interfere with international travel and trade. We call on all countries to implement decisions that are evidence-based and consistent.”

Some health experts, it is true, think that the WHO and the International Health Regulations revised in 2005 are wrong on this point and will be found wanting when the deeper post-pandemic audit is conducted. But I believe there is wisdom to the WHO’s recommendations. There are five key reasons why, whatever your instincts to the contrary, you should keep your borders as open as possible during a pandemic.

The first is practical: namely that by the time you shut your borders it is often too late, or (at best) will simply delay the inevitable. Better to engage in mass test, trace and isolate to squash transmission – precisely what the UK has failed to do, despite many relaunches, promises of “ramping up” and bombastic claims of imminent triumph.

Second, strict controls can be counter-productive: close the borders and, however hard you try, you will imperil the import of PPE, vaccines, food, medical supplies and health professionals. Border closure, by definition, is a blunt instrument, and it can do real harm to your pandemic strategy.

Third, excessive restrictions in general undermine the effectiveness of pandemic response when they reduce participation or lead to people looking for ways to circumvent public health measures. This may range from the everyday exploitation of loopholes in the rules, seemingly minor infringements (that, in the case of a lethal pathogen, sometimes have major consequences); to the failure to report symptoms for fear of being denied entry; to a range of illegal acts such as false declarations, or use of forged documents or test results on arrival; or the use of unofficial entry points.

Fourth, border closures or restrictions invite retaliation – leading to reciprocal tit-for-tat measures that can have less to do with virus control and more to do with trade, foreign policy and national self-esteem.

Finally, border closures can lead to discrimination against specific populations and human rights abuses. The language applied to the original virus and its variants is in itself all too often the source of stigma.

Remember, for a start, Donald Trump’s “China-virus” rhetoric – ugly language that doubtless played its part in the attacks on Asian people last year and boycotts of Chinese restaurants in countries around the world.

Such stigma sticks to an extent that is easily-forgotten. In 2014-16, Ebola in Guinea, Liberia, and Sierra Leone rapidly became known as the “West Africa outbreak” – with often unpleasant consequences for anyone with an African name or heritage. In 2014, Mark Sampson, the manager of the England women’s football team, allegedly told Nigerian-born player, Eniola Aluko, that he hoped her family wouldn’t “bring Ebola with them” to an England v Germany match.

Border and travel restrictions once introduced are hard to unravel. For 22 years the US prohibited people living with HIV/AIDS from travelling to the country. The ban was only officially revoked by President Barack Obama in 2010. Given 25.7 million of the 37.9 million people with HIV/AIDS live in Africa, the travel ban inevitably led to discrimination against African travellers.

How long will Brazilians and South Africans have to live with the association of specific Covid variants and the place where they were first isolated? The so-called “UK variant” – discovered in Kent last September – has already featured in countless bulletins around the world. How does that feel in a country that wants to be known for its “word-beating” vaccine roll-out? Names matter – and have real-life consequences at borders.

But even if such ethical considerations leave you unmoved, consider the practical application of border controls. To stand even a chance of working they have to be applied absolutely rigorously, logically and consistently. But – in the real world of international relations – this is simply never the case.

In practice, public health policy is always being weighed against the threat of tit-for-tat measures, especially from our five major trade partners – the United States, Germany, the Netherlands, France, and (ahem) China. Whatever ministers say to the contrary, border restrictions will always be balanced against the risk of diplomatic, trade, and wider security consequences. Axiomatically, therefore, they will be uneven and (at best) compromised.

The arrival of the P1 Brazilian variant in the UK has triggered panic about summer holidays. Will the world, in fact, be safe for us to venture into this year? There are a lot of difficult personal decisions ahead. Let us say that, by July or August, most of us have been vaccinated: a reasonably likely prospect. Should we then travel to countries where vaccination roll-out has barely begun or is incomplete – knowing that, even with the reduced transmissibility that seems to be a happy consequence of the jab, we may still be carriers of the virus?

For those with family and work overseas, there are genuine dilemmas ahead. But for those, like me, who just long to run arms outstretched into a warm, clear sea followed by a crisp lager and a salty snack – the moral choice should still be to exercise restraint.

This is not virtue-signalling but enlightened self-interest. As alluring as foreign beaches may be, we should all be trying, as an absolute priority, to force down global case rates – never forget that the higher the case rates, the more the virus will mutate. Nobody is safe until everyone is safe.

How beguilingly easy it is to demand a Fortress Britain approach. But – as so often in public health policy – what looks like the easy answer is no such thing. Even with the “red-list” ban on travel to the UK from 33 states, variants are still making their way through borders that, however hard we try, will always be porous. All that border restrictions absolutely ensure is retaliation, discrimination and disruption to the supplies we badly need.

The present focus upon borders – all over the world, it must be said – is a huge distraction from durable and effective pandemic strategies. In this country, vaccine roll-out is going well. Test, trace and isolate (TTI), meanwhile, remains a fiasco. We should be directing all our energies to correcting the dismal failures of TTI and taking the fiscal measures necessary to enable people to self-isolate when they need to. We must focus more clearly on the next stage of vaccination, ensuring that jabs get into everybody’s arms, and that the relaxation of lockdown – when it comes – is carried out with meticulous care and caution.

It is tempting for governments to look at public health crises as an external threat, a phenomenon from without. Pull up the drawbridge and all will be well. But this is a poor mantra for a country trying to handle a pandemic in an adult and sustainable fashion. It is always better, if harder, to focus on the long haul of domestic measures: the answer lies within.

Sophie Harman is Professor of International Politics at Queen Mary University of London, with a specific interest in global health. 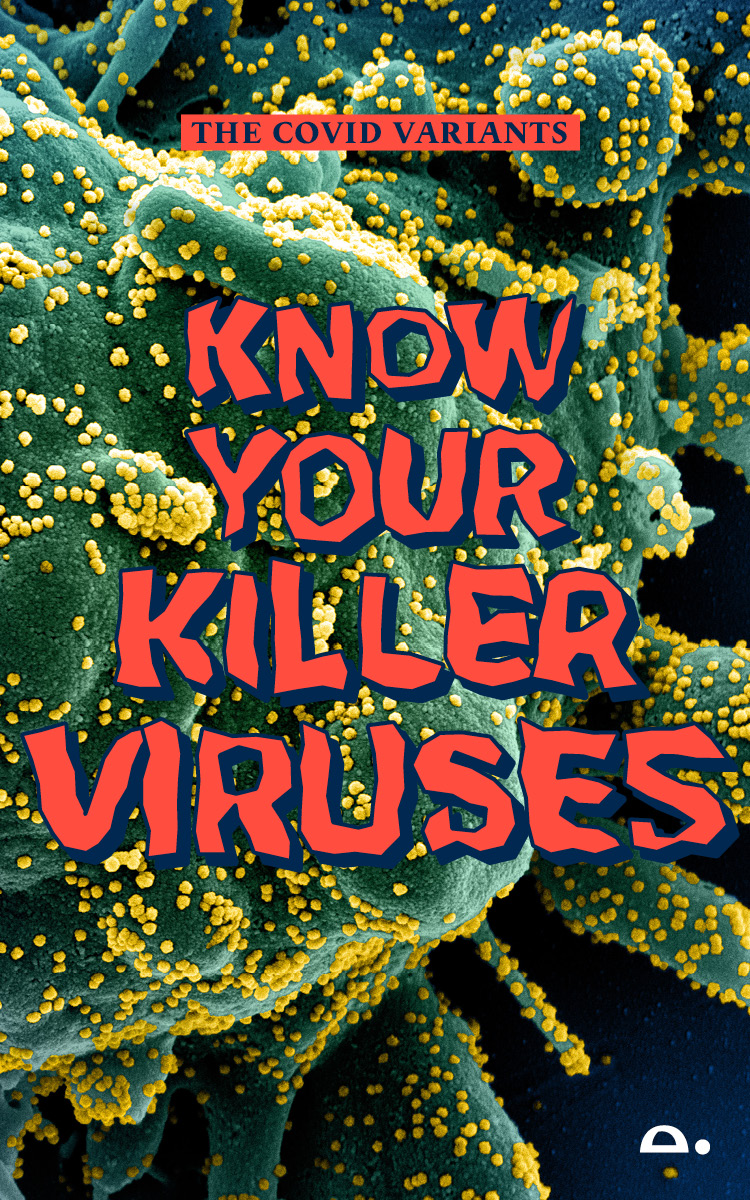 A global battle to contain Covid-19 is underway, with the vaccine pitted against the virus and its unpredictable mutations. What do we know about the variants now stalking the world?