A year of Covid | We‚Äôve all been affected by the pandemic, but few as severely as Geoff Woolf, the father of reporter Nicky Woolf. This is the story of his 306 days in hospital ‚Äì and beyond.

There is a before, and there is an after. Before was normality ‚Äì going to the pub, socialising, hugging, shaking hands, not being afraid. After was isolation, despair, loneliness, sickness and death.

But when was that moment exactly? For me, it was a viral video ‚Äì a message sent from people locked down in Northern Italy, where the virus had spiked early. At its heart was a warning: ‚ÄúThis will be you, soon.‚Äù That‚Äôs when I first found myself thinking, Oh, shit, this is real.

Nonetheless, my awakening took more time. When lockdown was brought in ‚Äì on an unaccountable time-delay ‚Äì I went, with friends, to the Lamb pub in Islington for a last drink. It felt, somehow, like those tales you hear of soldiers joining up with their friends to fight in World War One. A lark. Never such innocence again.

It is hard to look back on that moment. The sheer recklessness of it. As I describe in this week‚Äôs Slow Newscast, my own memories are coloured by what happened next to my family. Dad caught the virus early, and spent 306 days in the hospital, finally returning home severely disabled in January 2021. I will likely live forever with the guilt of knowing that I probably brought the virus back to dad. With that fatal failure of foresight.

But it was a moment that we all had. The swing from innocence and naivete to realisation and fear. The dawning horror.

Interested in how others remember that swing, I put the question out there. ‚ÄúPeople of Twitter, got a question: was there a moment last spring where you suddenly realised this pandemic was Happening? that it was going to be A Thing? Was there a specific tipping-point, and if so what was it?‚Äù

I was expecting a couple of dozen replies at most. But the response I got was overwhelming. The question clearly struck a serious chord. At 500 replies, I stopped being able to respond. Two days and almost three thousand replies later, it was clear I had inadvertently opened a Pandora‚Äôs Box of memory for people across the UK and the US.

Early on, it was clear that many people shared the same moment. For an overwhelming number of people, it was through the lens of sport. Quite a few pointed to the cancellation of the Indian Wells tennis tournament in the US. But, for Americans, by far the most common moment of realisation, people told me, was 11 March ‚Äì the day the National Basketball Association suspended the 2020 season.¬Ý

That same day was underscored by another impactful moment in the story of the pandemic ‚Äì the actor Tom Hanks announced that he had been diagnosed with the virus. ‚ÄúI got an alert on my phone that Tom Hanks and his wife were infected,‚Äù read one reply. ‚ÄúWeird, but that made it feel real. Same hour, NHL and NBA made announcements.‚Äù Another just wrote ‚ÄúTom Hanks.‚Äù

This is actually borne out by a study published in January 2021 in the journal Health Communication, which found that half of their sample changed their response to the illness after Hanks‚Äô disclosure. ‚ÄúA perception of increased susceptibility may be partly to blame,‚Äù the authors remarked, ‚Äúas participants noted feeling that if someone with the resources Hanks had was unable to avoid the virus, they were also susceptible.‚Äù

Other cancellations also triggered that moment of realisation for people. Quite a few pointed to the binning of South by Southwest, the popular tech conference in Austin, Texas, on 6 March. Others to the cancellation of St Patrick‚Äôs Day festivities in Ireland on 9 March.

More news-cycle savvy respondents, or those with friends or family in China, said they had started to realise earlier and sounded the alarm. The journalist James Ball pointed to the exact moment: he wrote on Twitter that ‚ÄúCoronavirus looks like it won‚Äôt be contained‚Äù on 25 Feb. Critic and columnist Sarah Ditum said that ‚ÄúA friend with solid China links had started telling me to stock my cupboards in January‚Äù.

Others pointed to viral videos (an unfortunate phrase) coming out early from China. One in particular that raised alarm on 2 February showed workers welding a building door shut. Even earlier was a video from 28 January of residents chanting from the balconies of huge apartment blocks in Wuhan. Then there was the death on 7 February of Li Wenliang, a young doctor in Wuhan. Dr Li had raised the alarm that the disease was more dangerous than it was being portrayed in the media.

For others, awareness came more gradually. ‚ÄúThere was no single moment for me,‚Äù one respondent told me. ‚ÄúIt was like a runaway train, first picking up speed when I heard 2nd-person reports from Asia starting mid January, gaining velocity as news came from Europe. It kept barrelling towards us in coastal US cities with highly mobile populations.‚Äù For many, the sudden panic-buying of toilet paper in mid-March was the moment that triggered the fear.

In the UK, a lot of eyes opened on 12 March, when Prime Minister Boris Johnson told people: ‚ÄúI must level with you‚Ä¶. Many more families are going to lose loved-ones before their time.‚Äù A common final straw came soon after, when Johnson himself came down with a serious case of the disease. (Matthew d‚ÄôAncona, for Tortoise, produced a gripping tick-tock of that particular event.)

Some of the most heartbreaking responses came from people in the healthcare industry, who recalled watching events unfold in China and Italy with growing dread. ‚ÄúI remember arguing with my family,‚Äù in January, ‚Äú‚Ä¶while they rolled their eyes,‚Äù wrote a woman who worked in healthcare news. ‚ÄúAfter the first nursing home in the state of Washington got hit I knew we were in for it,‚Äù wrote another healthcare worker. ‚ÄúMeetings began to call it a ‚Äòwhen‚Äô not ‚Äòif‚Äô.‚Äù

It is rare to see such a stark global pivot-point. As I say in the podcast, this virus has changed us as a society, not just as discrete individuals. That moment of realisation, the response to my open question made clear, spread through us like a tide ‚Äì or like a virus itself, a metaphorical prefiguration of the literal spread to come. A social media synecdoche.

As I read through the responses, I thought of those moments in time that change us all. Pearl Harbor. 9/11. A shared experience across the human race. I did not know most of the people telling me their stories, but I knew how they felt in that moment. We all do.

It was faintly chilling. But I also found it uplifting to think of the unifying power that such an experience has for us. If we are to pull together and get through this, it will be by harnessing that power together, as a society. We cannot do it alone.

The before, and the after, divide our lives like history. That is, I think, why my question caught fire quite so much ‚Äì there is guilt and shame attached to remembering those days. We were tested, and largely we failed. We didn‚Äôt listen to the imploring messages from Wuhan and Italy. We saw their mistakes, then we made them too. I have to come to terms with that, and so do we all. 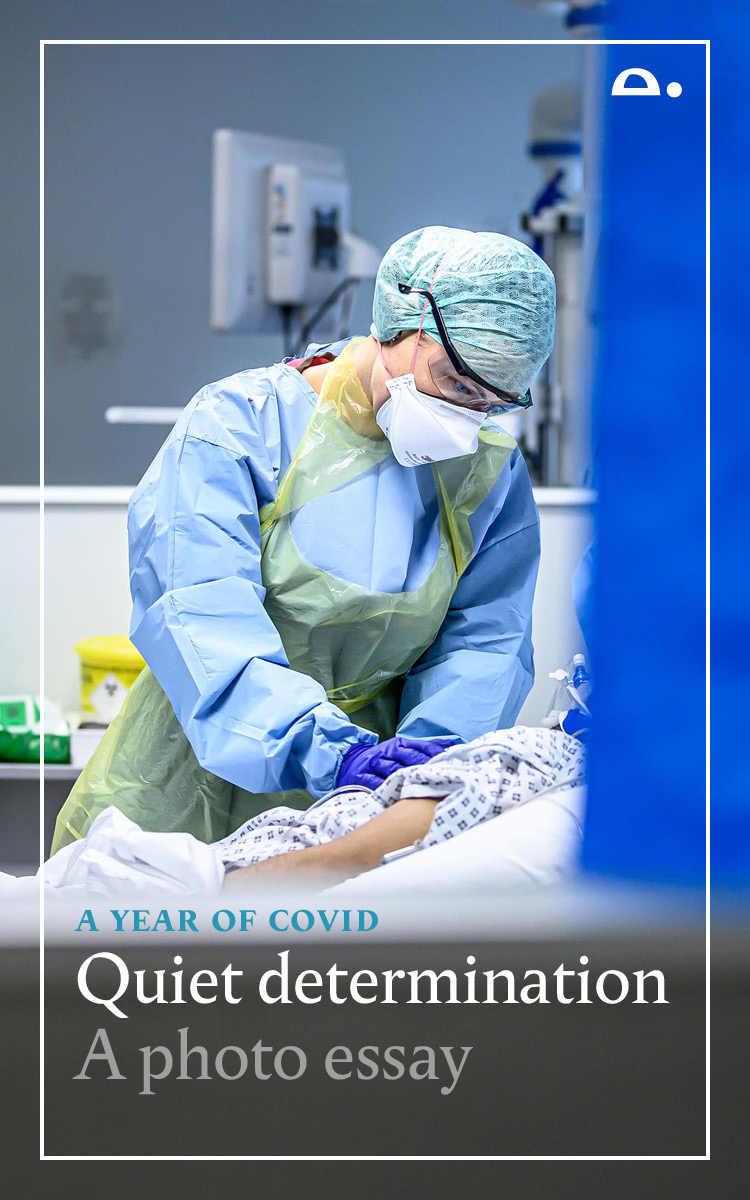 On the wards and in the intensive care units, the pandemic is as bad as it‚Äôs ever been. Jon Williamson, an anaesthetist, has been there with his camera