This week’s File was about the outgoing president, Donald Trump, and the tan stains he will leave on America’s body politic. But now, as of the middle of this week, Joe Biden is in charge, and perhaps our focus should change. Who is Joseph Robinette Biden, this man we now call president?

Happily, there is no shortage of information about Biden, accumulated during his 78 years on the planet, 50 of them spent in elected roles. To go back through his career is to go back through modern American politics. There were the eight years as Barack Obama’s vice-president, of course – this long GQ profile from the middle of that period, 2013, suggests just how “conjoined” that professional relationship was. There were the three and a half decades as a senator for Delaware – where, as this recent LA Times article explained, he developed an “across the aisle” working style (and made, it should be said, some despicable friends and choices). And there was his time, in the early 1970s, as a councilman for a Delawarean county – as recounted in this article by someone who was a local schoolkid at the time.

Somewhere amid all that – 1988, to be precise – there was even a(nother) presidential run, although Biden had to drop out early amid accusations that he had plagiarised a speech made by the then leader of Britain’s Labour party, Neil Kinnock. The story of that race is told in Richard Ben Cramer’s 1992 book What It Takes: The Way to the White House, which isn’t just one of the greatest political books ever written, it also contains some of the best biographical detail ever assembled on the man who would later become America’s 46th president. Do look out for it second-hand.

Then there are, of course, Biden’s own writings. Promises to Keep: On Life and Politics, from 2007, is his standard campaigning memoir, a starter guide to his view of the world. It is, however, nowhere near as revealing as Promise Me, Dad: A Year of Hope, Hardship, and Purpose, published a decade later, on the death of his beloved son Beau from brain cancer. Beau, along with Hunter, survived the car accident in 1972 that killed Biden’s wife, Neilia, and their daughter, Naomi. Loss and grief are etched into the president’s life and even into his politics – as a recent interview with Stephen Colbert, retold in this ABC News story, demonstrated.

More recently, Joe Biden: American Dreamer, by the accomplished New Yorker writer Evan Osnos, is more of an extended essay, but still the best single volume on the new commander-in-chief. And there is, of course, A Promised Land, Barack Obama’s first volume of presidential memoirs, which is full of references to his vice-president: fond, teasing and full of admiration for Biden’s stoicism, political range and sheer guile.

When it comes to Biden’s actual presidency, why not start where it started? With his Inaugural Address. In truth, these grand, ritual speeches rarely augur much about an incoming administration, but they do draw attention to some of the bigger themes – such as, in Biden’s case, climate policy. Philip Collins, a former chief speechwriter to Tony Blair, analysed this week’s for Tortoise.

The choreography of Inauguration Day also highlighted something that has become clearer for months: the importance of Kamala Harris, the first woman to serve as vice-president, in the new administration. Whether or not Biden plans to be a one-term president and to hand over to her in 2024, she is sure to be a consequential holder of the office: a progressive version of Dick Cheney rather than a frustrated factotum like Al Gore during Bill Clinton’s presidency. Harris’s book, The Truths We Hold: An American Journey, is a fine guide to her life and political beliefs.

On foreign policy, this 2020 essay by Biden for Foreign Affairs is the clearest blueprint to date – including his plan for a “global Summit for Democracy to renew the spirit and shared purpose of the nations of the free world”. He has nominated his longtime ally Antony Blinken to be Secretary of State (see useful profiles in both Politico and the WSJ).

As for Biden’s economic thinking, a good overview is provided by this combination of articles from Bloomberg, the NYT and the Washington Post. The first two of those concentrate on his plan for a $1.9 trillion fund to support American businesses and individuals through the pandemic, featuring an increase to the federal minimum wage – an increase that, as our co-founder James Harding explained in his recent Editor’s Voicemail, is already rallying Republican opposition. Oh, and you can read more about Biden’s pick for the Treasury, Janet Yellen, here and here.

Susan Rice, director of the US Domestic Policy Council, will be an important figure in the administration, as this Brookings article explains. Ron Klain, White House chief of staff, is profiled by NPR and Reuters.

The politics of Biden’s approach to climate change is intimately connected to his fragile coalition with the Left of his party – and its figurehead Alexandria Ocasio-Cortez. Does the new president have the bandwidth to be the FDR of environmentalism and pursue a transformative Green New Deal of the sort that progressive Democrats demand?

But the main question is, of course: did he learn anything from that time he met Leslie Knope?

Trumpism and the far right

But we shouldn’t now just ignore Donald Trump and the politics he has inspired. As our File has made clear, American democracy is likely to experience a serious and lingering Trump hangover.

To understand the future of the grassroots movement now that its leader has left the White House, start with Hate in the Homeland: The New Global Far Right by Cynthia Miller-Idriss – who also wrote one of our articles this week. For extraordinary undercover work in this area, see Going Dark: The Secret Social Lives of Extremists by Julia Ebner.

If you really want to spend more time in these murky waters, Cas Mudde’s The Far Right Today and David Neiwert’s Alt-America: The Rise of the Radical Right in the Age of Trump are also useful.

But it’s not all underground networks and online radicals: 75 million people voted for Trump in November. The mentality of the “left-behind” – Steve Bannon’s “deplorables” – is brilliantly described in Arlie Russell Hochschild’s Strangers in their Own Land: Anger and Mourning on the American Right and Jonathan M Metzel’s Dying of Whiteness: How the Politics of Racial Resentment Is Killing America’s Heartland. Ashley Jardina’s White Identity Politics is a rich source of data and analysis.

Then there are always, of course, the words of #45 himself. In the final speech of his presidency, earlier this week, he promised: “We will be back in some form.” 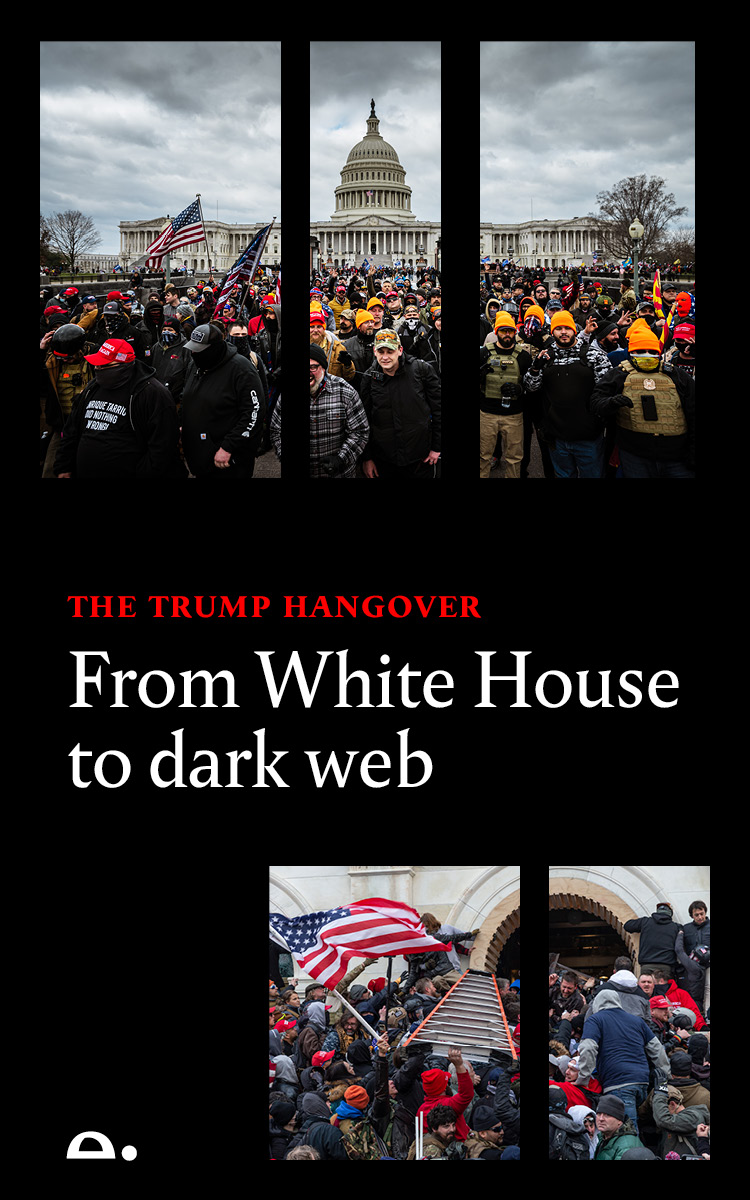 From White House to dark web

From White House to dark web

The Proud Boys and QAnon conspiracists have had a bad week, as the predicted second insurrection failed to materialise. But they are building dangerous new coalitions among newly homeless Trump voters – and exporting their poison abroad