Yesterday afternoon, as he took to the podium one last time as president, Donald Trump hinted at his return: “We love you. We will be back in some form.” The question now is just what form his political movement will take. Will Trump run again in 2024? Or will Trumpism – an ideology that has become bound up with the Republican identity – no longer have the man himself at its centre?

We know that Trump doesn’t like to lose. As soon as his defeat in November became clear – even among the many debunked claims about a fraudulent election – he immediately teased plans to run again. His advisors reportedly suggested, at the time, that he would launch a 2024 campaign on the day of Biden’s inauguration. Some said he may wait several months to make the announcement, taking time to put together a new campaign strategy.

Others still have floated the idea that Trump will never try again – even if he says he will. What he needs, they claim, is the attention.

Trump’s first hurdle is his second impeachment. If convicted, the former president will be barred from future office by the Senate. “Right off the bat [it’s a test] to see exactly where Trump’s power still lies and where it’s perceived to lie,” says Christopher Borick, professor of political science and director of the Muhlenberg College Institute of Public Opinion.

The Senate requires a two-thirds majority in order to impeach – that’s 67 votes.

If you take into account the 50 Democrats casting their ballot, this means 17 Republicans will have to vote to convict Trump.

According to Borick, while there is the possibility that some Republicans may want to “take him out of the equation”, it’s unlikely that so many will stick their necks out for an already-outgoing president.

If Trump does launch a comeback of his own, it’s a separate question entirely whether he could overturn his defeat in November’s election to once again make his way to the Oval Office.

November’s election saw him lose crucial ground in swing states, including the “blue wall” states of Pennsylvania, Wisconsin and Michigan that he unexpectedly won in 2016. On the final count, he lost the popular ballot by seven million votes, a substantially bigger shortfall than the three million between him and Clinton in 2016.

But to rule out the possibility of a second Trump win could be a mistake. Despite his defeat, November’s election saw him pull in nine million more votes than he did in 2016. Not only did he retain a tight hold over large swathes of the country, improving his vote share in strongholds like Idaho, Utah, Arkansas and Tennessee, but he also shifted the dial in ways that could point to possible strategies for 2024.

If it can happen again: how?

If Trump does choose to run again, it’s clearly not going to be easy for him to win the presidency. He would need a convincing strategy. Given his recent trifecta of defeat, what could such a strategy look like?

Trump’s inroads with Hispanic voters, especially in key states like Florida and Texas, point to a potential advantage in a campaign for 2024. Largely on the basis of being anti-socialism, pro-choice, and pro-God, Trump may be able to retain favour with some diverse voter communities and grow a wider base of support.

55 per cent of the Cuban-American vote in Florida went to Trump, and in Texas his traction in rural and suburban areas meant that he won the state by around 650,000 votes. These areas include border counties that – despite his anti-immigration rhetoric – have hung with Trump on the basis of socially conservative, Catholic beliefs.

Looking ahead, Nevada’s 50 per cent non-white population might be the key to a Republican victory there in 2024 – a pattern that could be repeated along the Sun Belt that reaches across the south of the US.

Scenario 2: Trump beats back the Democrats in the Midwest

Trump’s 2016 campaign overcame the longstanding Democratic supremacy in Pennsylvania. But that didn’t last. Biden, whether by homefield advantage or other means, surged in the state and managed to flip it back in 2020. Across the Midwest, Trump seemed to let votes slip through his fingers.

But the Midwest is the “quintessential purple region of America,” says Miles Coleman, electoral analyst and associate editor of Sabato’s Crystal Ball. Its typically older, working-class demographics could play well for Trump in future.

If Trump could repair his relationship with white conservatives in states like North Dakota, Ohio, South Dakota and Wisconsin, they may be ripe for the taking. He would also have to find a solution to what ailed his campaign in Macomb County and other similar seats: in areas that seemed perfect for his agenda he didn’t win over white working-class votes in sufficient numbers.

Scenario 3: Trump reels in the suburbs

Trump lost out in the suburbs and the further-out exurbs around cities. The key battleground of Georgia showed this very clearly. Biden dug in around urban areas such as Atlanta, Augusta, Savannah and Columbus, while the rest of the state was a sea of red. Eventually losing the seat with a percentage share of 49.3 per cent, Trump’s lack of appeal in the suburbs was a critical factor.

Republicans throughout the country campaigned in the suburbs on the message of protecting communities, in part, from crime and falling property values – but something wouldn’t stick. Trump would need to revitalise his campaign those areas, especially when it comes to white women.

If the economy is in bad shape in four years time, this could play well for Trump. The economy is already seen as a weakness for Biden, meaning it could drag him down if he is seen to have handled it badly.

Jobs were a key touchpoint of Trump’s campaign in 2020, and, despite the backdrop of a deep Covid-induced recession, it’s an argument he seems to have won.

Trump not only outdid his opponent on the topic, he also came out ahead of both of his predecessors at the same critical moment in their elections for a second term. When he ran for a second term in 2004, polls put George Bush’s economic approval ratings in the mid-40s; Obama’s hovered around the same level in 2012.

How much has changed since November?

A conviction is not the only thing that might stop Trump from running in 2024.

“While he’s defied lots of laws of politics, if you will, he’s not immune to the diminished stature that takes place with presidents when they leave office,” says Borick.

Leaving office may leave Trump without a megaphone, not least as he has been indefinitely barred from Facebook and Twitter. While Coleman suggests this may not have an impact on Trump’s central campaign strategy – his rallies – it is not unreasonable to expect that the former president will struggle to reach as wide an audience.

“At least in the short term, with his ability to reach out through prime social media platforms taken off the table, he’s going to have a challenge as much as Donald Trump can have a challenge in getting attention,” says Borick.

The other question is whether Trump’s turbulent last months in office will cast a lasting shadow over his presidency. A recent poll by Pew Research Center found that the outgoing president suffered a 17-point drop in Republican approval ratings in time after the election in November. The same poll found that just 29 per cent of Americans – across both parties – approved of the way Trump was handling his job as president.

Trump’s approval ratings are down…

It’s a stark figure for an outgoing president – higher only than Nixon’s outgoing rating in 1974 – but it also represents a serious gap in any future strategy. “I think he walks away and in a very damaged state,” says Borick. Though the most hardened of Trumpists will remain loyal, Borick suspects that his more marginal voters may not want to repeat the “drama and tension” of the past four years, particularly in light of the events at the Capitol, and Trump’s refusal to stand down quietly.

The outgoing president’s approval ratings hovered below 50 per cent throughout his four years in office; even at his zenith, he never achieved the majority of American support. If Trump really has lost a proportion of the Republican vote, that may be enough to scupper his chances in future elections.

The future of the Republican party

Even if his support has diminished, there is no doubting that Trump represents a core constituency within the party. “The party has to wrestle with this challenge of having a generally disliked former president carrying heavy weight within the Republican realm,” says Borick.

His departure certainly opens the door for others to try and redefine Republican values, and shift away from Trump’s central role. The central question remains: if not Trump, who?

There is no clear answer. A November poll by Politico/Morning Consult saw Trump as a favourite for 2024, by a huge margin of 41. With no clear alternative, the Republicans will have to do some soul-searching.

It could stay in the family – be that his daughter Ivanka, who is said to be weighing up a run for Florida governor, or his daughter-in-law Lara, who is tipped for a Senate seat in North Carolina. Then there is Don Jr., who has capitalised on his father’s following and gained hundreds of thousands of his own supporters.

Borick is sceptical. “Certainly they would have some great advantage with the name recognition and the support for Donald Trump within Republican ranks,” he says, but they may be haunted by Trump’s standing as he leaves office. “I think in the primary it certainly would be a benefit. But in a general election, I think it might carry more baggage than upside.”

Second in line – according to the pollsters – is Mike Pence, but electoral analyst Coleman is sceptical that a traditional (read: not populist) candidate would do well. The Republicans would struggle to likely bring back Trump’s largely populist, outspoken and sometimes extremist following to a more moderate position.

Whether he runs again or not, Trump’s shadow looms large. For other Republicans, it is a question of escaping his grip, or of learning to live with it in a Faustian pact to ensure the support of his followers.

What’s really next for Trump?

Trump is, at his core, a businessman. So it may come as no surprise that his vague promises to “keep the movement alive” may be little more than a financial strategy.

Trump is in debt – he owes at least $421 million to creditors, most of which is due in the next four years. Meanwhile, Forbes estimates that Covid’s impact on the Trump Organization’s hotels, casinos and golf courses has shrunk his net worth by $1 billion. He is also being investigated over allegations of improper inflation of assets, tax evasion, and illegal NDAs paid to women who accused him of affairs during his election campaign.

It is no secret that Trump loves attention, but he may continue to tease a 2024 run because he needs it. A platform and a loyal fan base could help him raise money to clear his debts, and distract from those investigations.

Or perhaps, just perhaps, he’s serious. Yesterday’s speech may not have been his last as president, after all. 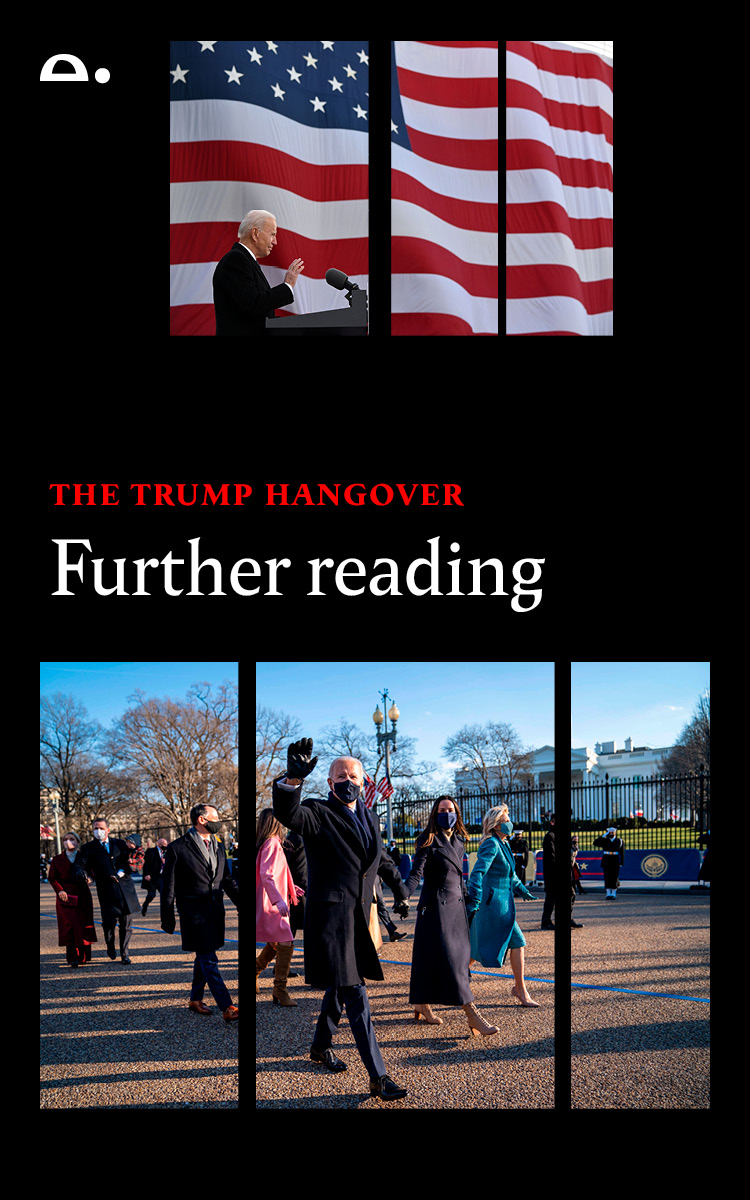