We are greeted at the entrance of Club Med’s Ixtapa resort, and welcomed into a world so new. “Get a drink, have a good time now, welcome to paradise.” Except we are not actually on Mexico’s Pacific coast. Nor are we even, dare I mention it, daydreaming about life beyond you-know-what. We are 47 seconds into the title track of the Avalanches’ giddying 2000 masterpiece, Since I Left You.

Twenty seconds after we are brought into the resort, a woman’s pitched-up refrain sends us skywards: “Since I left you, I found the world so new.” The new world is, well, the album: a joyous, dizzying hour made up of over 3,500 samples from other songs and not-songs, of which the initial greeting (from the 1986 TV movie Club Med) and subsequent acclamation (from the 1968 song ‘Everyday’) are just two.

The Avalanches weren’t quite the first act to make an album entirely from samples, reuses of sound from elsewhere. The hip-hop innovator DJ Shadow can stake that claim with his 1996 album Endtroducing.

But the Avalanches were the first act to set about the task with such rapturous abandon. They weave together a coherent whole from snippets of Western movies, golf videos, spoken world albums, whinnying horses, ship horns, and thousands more ephemera, refashioning the banal into the sublime, and rendering time and context immaterial.

They create new stories with old sounds. In the first track, the line “Since I left you, I found the world so new” is actually “Since I met you…” in the original song, ‘Everyday’ by The Main Attraction. But the sampled vocals are chopped up and rearranged in such a way as to turn a standard line from a 1960s love song into the refrain of a woman celebrating the end of her relationship in a distant tropical paradise.

One of the few well-known songs they sample is Madonna’s ‘Holiday’; the band believes it was the first sample she ever cleared. But even this is not quite as it seems, because the sound they use is in fact from the 1986 song ‘Holiday Rap’ by Dutch duo MC Miker G. and DJ Sven, who re-recorded Madonna’s instrumentals from scratch. The Avalanches are sampling a novelty tribute to Madonna, not the Queen of Pop herself.

The album’s musical legacy is undeniable. Among those who cite its influence are the producer Jamie xx and the experimental pop band Animal Collective. Even though it is two decades old, it almost feels more at home in the current musical landscape where samples and remixes are now mainstream (the year’s biggest song, Cardi B’s ‘WAP’, centres around a sample of a 1993 Baltimore club classic).

From the era of the dial-up tone it was able to foresee our very 21st-century modes of creation and communication: a linguistic plane of zines, memes, mashups, GIFS, throwbacks, lip syncs and TikTok dance trends, where we cut, paste, and rework pieces of the past into new forms.

If the album’s first track welcomes us in, its last says goodbye. The piña-colada heat of the opener gives way to a refrain of j’ai froid – I’m cold. The beat slows and those opening words, “Since I left you, I found the world so new,” morph into the ones that see us out: “I’m trying, but I just can’t get you. Ever since the day I left you.”

In the context of the album, it is a lament, perhaps, for the relationship left behind. But for us, the listener, there is a similar but different meaning: we haven’t heard anything quite the same since. 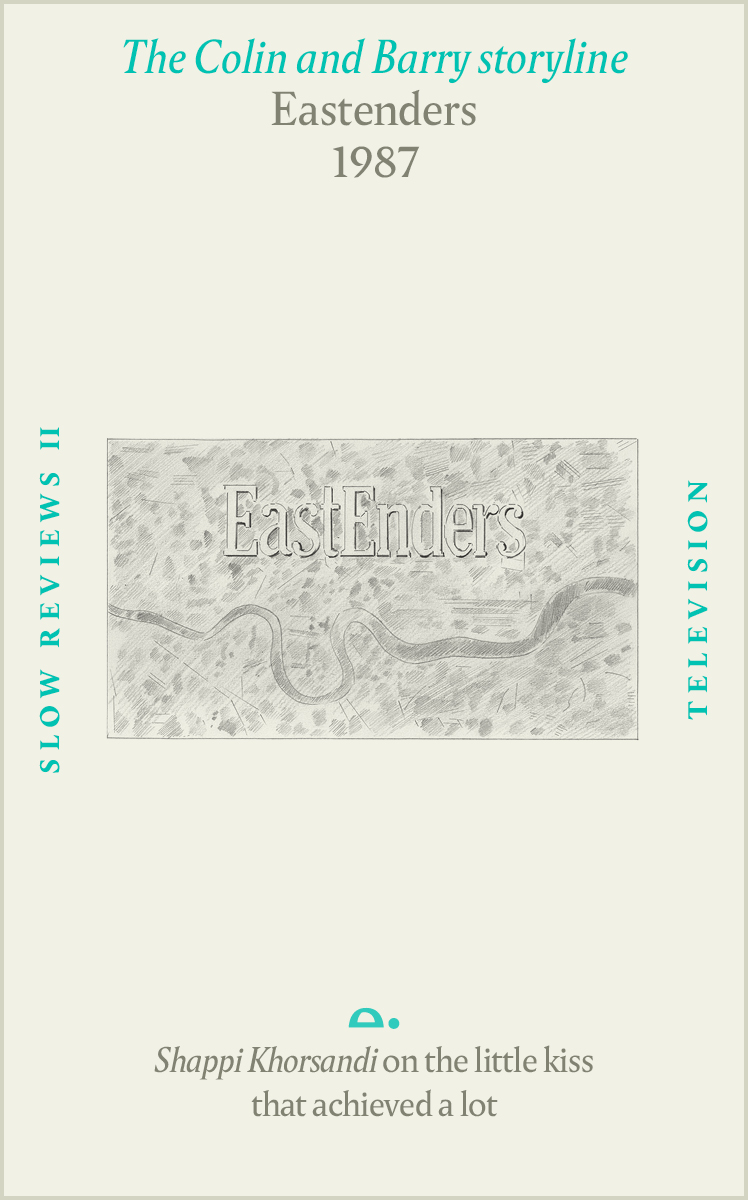 The Colin and Barry storyline

The Colin and Barry storyline

Shappi Khorsandi on the little kiss that achieved a lot