Year of the Screen | From Zoom calls to gaming sessions, from Netflix binges to smartphone-led protests, this is how 2020 panned out

For those times when you want to tell friends, family and other innocent bystanders about the great cultural significance of video games – which, in my case, is at least five or six times a day – numbers used to be the best option. Simply explain that a single game launched in 2013, Grand Theft Auto V, has made about $7 billion to date, surpassing the box office take of any movie ever. Or point out that, earlier this year, on the occasion of an in-game gig by the rapper Travis Scott, 12.3 million people once played Fortnite at the same time.

But now, at the butt end of 2020, it’s better to ignore the numbers and instead reach for a single tweet. It was posted on 19 October by Alexandria Ocasio-Cortez – aka AOC – the New York City congresswoman and all-round political dynamo. And it took the form of a question to her ten million Twitter followers: “Anyone want to play Among Us with me on Twitch to get out the vote? (I’ve never played but it looks like a lot of fun)”

Actually, it is less a single tweet, and more a modern-day parable. Its lessons deserve to be unfolded one by one, starting with its reference to Twitch. Twitch, if you’re not already familiar, is a video-streaming platform that was bought by Amazon for almost a billion dollars in 2014 (a price that now seems cheap) and that was originally set up for gamers to watch other gamers, well, play games – live and online. It has since expanded in both size and subject matter, although game streams are still the main attraction.

Twitch should be tempting territory for politicians. Its viewership is huge and committed: a collective 660 billion minutes of footage were watched on the site last year, which breaks down to about 12 hours per user per week, or the equivalent of a feature film every day. And it is young: almost three quarters of those viewers are under 35.

But, at the time of that tweet, there were really only two politicians to mention on the platform – Donald Trump and Bernie Sanders – and both of them used it for broadcasting campaign videos and interviews, rather than for gaming.

Ocasio-Cortez’s innovation, and it really did feel innovative when she appeared on a live stream on the evening of 20 October, was to use Twitch for Twitch’s intended purpose: playing a game while shooting the breeze. She was joined briefly by her fellow congresswoman Ilhan Omar, and an average of 400,000 concurrent viewers in the course of more than three hours. Almost six million people have since watched the archived broadcast.

Then, the most crucial part, AOC’s choice of game. Among Us was first released in 2018 to little fanfare, but it has become one of the biggest cultural phenomena of 2020, in part because of its steady proliferation on Twitch, in part because of what it is: a cartoon murder-mystery party. You and up to nine others become block-coloured crewmates on a spaceship, except some of the group are murderous “imposters” – can they be identified in time? The process of nailing these imposters involves plenty of online chat between players in the real world. It goes well with friends and with alcohol. It is a game that was made for socialising.

Which is to say, it is a game that was made for the locked-down stretches of the past year. Meeting up with groups of friends has been literally – and the psychological implications of the next word should not be underestimated – illegal during parts of the pandemic. But meeting up in digital spaces has been perfectly fine, and it’s possible to have some old-fashioned fun there, too. No wonder the average number of people concurrently playing Among Us on Steam, the largest PC gaming platform, rose from 118 in January to 176,454 in October.

And it wasn’t just Among Us. One of the most serendipitous releases in gaming history came on 20 March, just a few days before Britain entered its first lockdown. The game was Animal Crossing: New Horizons, the latest entry in a long-running series developed by Nintendo, and it turned out to be a form of psychic vaccine. The aim is simply to gather resources, from branches to butterflies, and use them to improve and personalise your dwelling on an island inhabited by anthropomorphic critters. Just as the pandemic tried to make homesteaders of us all, gaming gave us an easier, cuter alternative.

But what really distinguished Animal Crossing: New Horizons at the time was its social component: you can invite friends to your island for them to experience your notion of comfort and bliss. Even real-life households, let alone mates separated by the pandemic, began to organise Animal Crossing sessions, crossing digital oceans to check out each other’s islands even though they could have just crossed a room to check out each other. There was a run on the Nintendo Switch, the only console that plays the game.

Then, as summer came and people started looking for outlets for their pent-up energy, Fall Guys had its moment. This is a far more rambunctious game than Animal Crossing: 60 players convening online to participate in madcap contests in candy-coloured arenas. It is fast relief, instead of slow burn. But it was still about meeting up to have a good time.

The truth is that when Ocasio-Cortez posted that tweet, she was simply doing what millions of people – millions more people – had done during 2020. She was getting the gang together for some gaming. Does that make her that rare, much-sought-after thing among politicians: a normal person? Who knows? Because she is a politician, and one who was electioneering on behalf of Joe Biden, the decision to go on Twitch was no doubt a carefully considered one. Even the choice of game might have been calibrated to overlap with current trends, as Among Us certainly does.

But, normal person or not, that tweet did do something to normalise gaming – and, frankly, that’s needed. One problem with being a gamer, or at least with being me, is that you get back ache from constantly adopting a defensive posture against all the dumb stereotypes that somehow persist. They’re a waste of time! Girls don’t like them! They’re the preserve of bedroom misanthropes whose only relationships are with their controllers! Wrong, wrong, wrong. In fewer than 280 characters, a US congresswoman provided a pretty good counterargument to all that.

And roughly 280 days of this year, the days that officially constitute the pandemic, will be a pretty good counterargument too. The idea of coming together to play games may not be new – it was woven into the arcade experience, into matches of 1993’s Doom on local area networks, into the immense popularity of World of Warcraft – but it has gained more meaning and more practitioners in this troubled year. When an Oxford University study was published last month showing that gaming can be good for your mental health, based in part on data from Animal Crossing players, a million voices responded in unison: uh, yeah…

Of course, none of this is to say that single-player involvement has disappeared from games. My favourite gaming experience of 2020 – so much so that I anticipated it in an essay for the Tortoise Quarterly – was Half-Life: Alyx, and that is a resolutely single-player construct. Not only are you Alyx, battling through a meticulously plotted story in a nightmare future-city, you against the game developers. But you’re also doing it from under cover of a virtual reality headset, another layer of insularity.

My second-most anticipated game of the year, Cyberpunk 2077, comes out today and is also a solo affair. In fact, it’s also another meticulously plotted story in a nightmare future-city. Other honourable mentions for great, recent single-player games should go to: Marvel’s Spider-Man: Miles Morales; Hades; Crusader Kings III; and Spelunky 2. The private pleasure of sitting in front of a screen, controller in hand and focused in mind, lives on.

Yet even these private pleasures are shared ones, or can be. It is the same joy as reading the same book as someone else at the same time. Where are they up to now? What do they think of it? Although, in gaming’s case, the joy is spread across the internet – and breathless. The number of articles, forum postings, tweets, videos and Twitch streams devoted to the games I just mentioned is uncountable. It is its own form of community, albeit an occasionally fractious one.

As the year ends, it seems particularly apt that the new generation of gaming consoles is here. Sony’s PlayStation 5 and Microsoft’s Xbox Series X/S have had to endure very Covid-times releases: supply chain disruptions that meant stock shortages that will mean Christmastime disappointment. And, as with any new console generation, the games are still catching up to the hardware – we are, in effect, still playing the last generation’s games, only quicker and with better graphics. Where will game designers take us eventually?

Because they will take us somewhere. And, after 2020, I suspect there will be many more people along for the ride. “Alexandria,” they say in loud unison, “we want to play Among Us.” 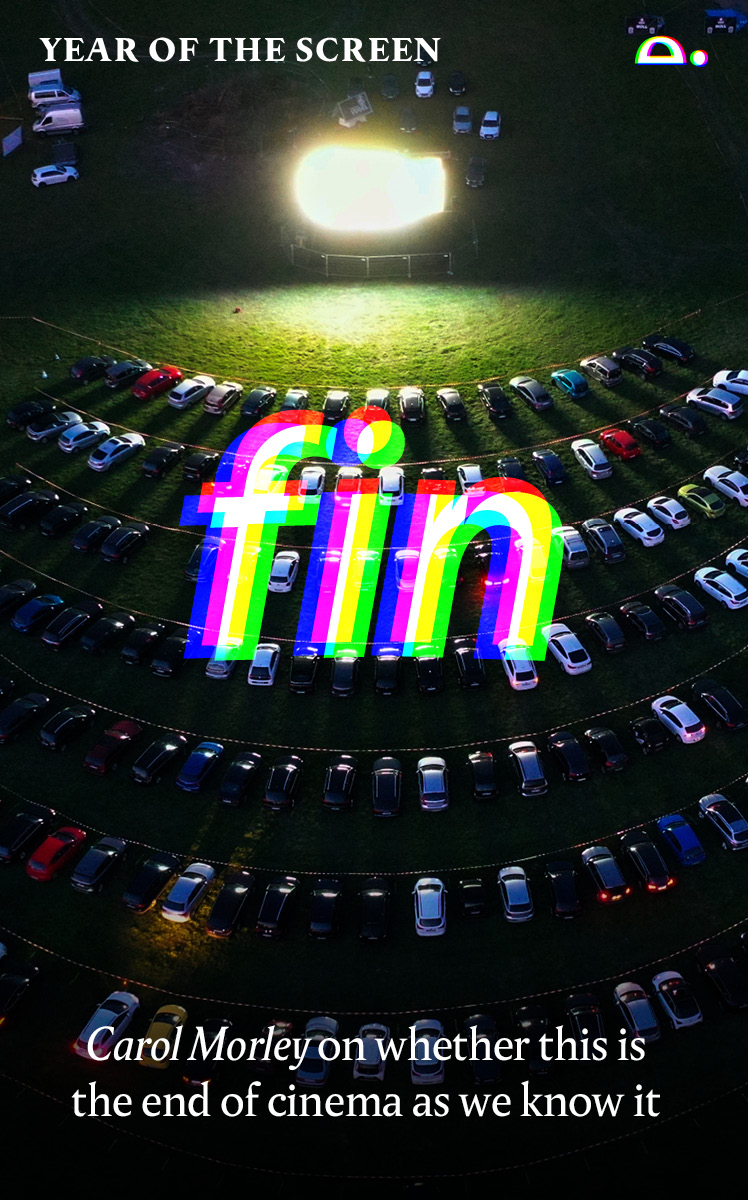