Year of the Screen | From Zoom calls to gaming sessions, from Netflix binges to smartphone-led protests, this is how 2020 panned out

It was pretty clear on 25 March. That was a couple of days after Boris Johnson had made a televised statement – watched by over 27 million people – to announce a national lockdown, and the day of his first press conference under the new conditions. The press themselves were not present as they had been previously. They were watching from afar through their computer screens, their faces appearing on a widescreen display in the conference room whenever they asked questions, and also on the viewing public’s television screens. Screens within screens within screens.

But it has become even clearer since. On 30 March, a new routine was added to the daily press conference: one of the government’s scientific advisers would point at a screen showing slides of the latest coronavirus data. But in the intervening days, we had all already settled into our own new routines: work meetings conducted on video platforms; constantly scrolling social media feeds for the latest news; streaming binges and gaming sessions to massage our troubled minds. Like those government briefings, we had resorted to doing everything through screens.

So now, for this week’s Tortoise File, we are going to call it: 2020 was the Year of the Screen. Many of our memories of this time will be flat and four-cornered, and the statistics will back up our reminiscences. According to the retail analysts NPD, sales of television sets in the US were 86 per cent higher in the last week of April (when stay-at-home orders were really starting to bite) than they were in the same week of the previous year. The videoconferencing platform Zoom went from 10 million meeting participants a day in December to 300 million in April. Netflix gained over 15 million new subscribers in the same period, more than double its forecast.

These numbers are impressive but also, perhaps, concerning. Our screen fixation calls to mind Jack Kerouac’s lament for post-war society issued in his 1958 novel The Dharma Bums: “television sets in each living room with everybody looking at the same thing and thinking the same thing at the same time….” Of course, we have a lot more choice now than those 1950s Americans did – but there will still be some who share Kerouac’s spiritual unease.

At the very least, it is clear that our heightened engagement with screens this year has had an effect – or various effects. Only last week, scientists from the UK’s Royal Society highlighted the causal links between video streaming and climate change. According to their report, “streaming one hour [of video] on a smartphone generates roughly 8 times more emissions in 4K or UHD (Ultra High Definition) compared with SD (Standard Definition)”. It’s all to do with the energy expended along the information superhighway running from a streaming site’s servers to your handheld device.

Meanwhile, psychologists warn that the social development of young children will have been hindered by disaggregated Zoom classes. A generation of osteopaths will be kept in business by the bad backs resulting from too much time at makeshift desks.

But what happens if – when – “looking at the same thing and thinking the same thing at the same time” is actually a good thing? This is the territory that we are particularly eager to explore in this week’s File: the comings-together and figurings-out that wouldn’t have happened were it not for the technology in front of our eyes. As Nimo Omer will explain on Wednesday, Zoom can actually be a force for good. As I will write on Thursday, games can help to overcome isolation. (See full list of contents below.)

And it’s not just about lockdowns and the pandemic. The full horror of the killing of George Floyd, pinned to the ground by Minneapolitan police officers, might not have come to light had it not been for the smartphones that witnesses held up at the scene. From their screens to ours came footage of an atrocity. And it fuelled a worldwide protest movement that was itself, in large part, organised and conducted by smartphone. Millions of people all thought the same thing – and they acted.

Will we ever see the like of this again? To some extent, yes, of course. By claiming this as the Year of the Screen, we are certainly not ignoring the huge influence of screens in past years, nor denying their significance in future years. People will still be “doomscrolling” in 2021 and beyond. (A word that the Oxford English Dictionary people have identified as one of the “words of an unprecedented year,” and defined as “the action of compulsively scrolling through social media or news feeds which relate bad news”.)

But there is a case to be made that 2020 was also the year of Peak Screen. This argument is informed by the numbers: smartphone adoption in the UK, for example, has been plateauing for a few years now, and is unlikely to shoot up in the economically constrained years after the pandemic. Then there’s the matter of sheer reliance: will we ever need our devices so much again?

There is even a technological dimension. The very technology of screens – those you hold in your hands, those erected in living rooms – has become so sophisticated that it is difficult to imagine great advancements in future. Of course, if you want to get nerdy about it, there are always higher resolutions, higher refresh rates, greater dynamic ranges. But how many of those potential improvements will be clear to the average consumer? We’re not talking about the move from black-and-white to colour here.

Indeed, it’s possible that the next leap will be towards screens that aren’t really screens as we know them. This is a future of virtual reality headsets and (what is more likely to achieve mass adoption) augmented reality eyeglasses. And this is, in its way, a screenless future: when the screen is everything in front of your eyes, what really counts as a screen any more?

But there’s no need to future-gaze to see that the technological marketplace is an unforgiving arena. The final piece in this week’s File, written by the film director Carol Morley, will be about a type of screen that didn’t prosper this year: the silver screen. Cinemas found themselves shuttered for most of 2020, a tremendous blow to a business model that was already rather fragile in the age of huge flatscreen TVs and housebound streaming. As if to underline the merciless point, Warner Bros announced last week that it will launch all of its 2021 movies – including tentpole releases such as the new Dune adaptation and the next Matrix sequel – simultaneously in multiplexes and in homes.

We’re calling 2020 the “Year of the Screen” because screens were so integral to our experience of the year, but also because we may never again have a better moment. What I’m looking at as I type this; what you’re looking at as you read it; what we’re going to watch Netflix on later – let’s give them their due. Stay tuned.

Tuesday 8 December. Matthew d’Ancona on the many delights of the streaming age.

Wednesday 9 December. Colin Grant on the killing of George Floyd, refracted through screens.

Wednesday 9 December. Nimo Omer on how videoconferencing has broken down barriers – to activism and involvement. 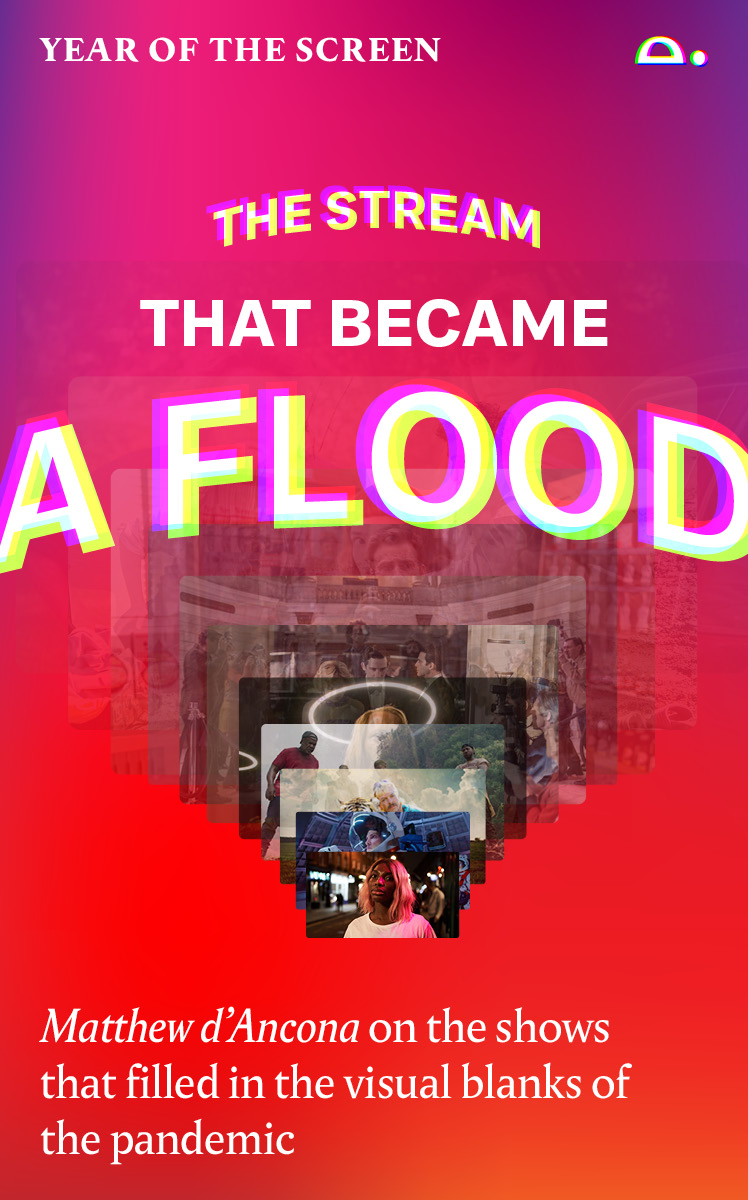 The stream that became a flood

The stream that became a flood