In China, there are a lot of very rich people. There are also a good many formerly rich people who are now in jail.

In these two facts lies a paradox in the way that today’s China defines itself as a success story in areas from technological innovation, to control of the coronavirus, to global governance.

What is the national narrative that the ruling Chinese Communist Party (CCP) is shaping – for consumption by its people and by the wider world? To fully understand it, we need to recognise the assessment of risk that underlies China’s vision of its future and the powerful influence of the country’s traumatic modern history.

Entrepreneurship shapes the story of how China sees its future development, whether it’s financial, technological, or indeed cultural (think the movies of Zhang Yimou or the art installations of Ai Weiwei). China’s expansion promises great opportunities, but the risks are not the same as in western societies, because entrepreneurship is both less tied to the state, and more so, than in any liberal country.

In the US or Britain, millionaires often imply that they are self-made. Yet they all rely on norms that have protected them: a robust system of contracts; assurance of an independent judiciary in the case of disputes; and a reliable expectation that welfare support will be there if things go wrong.

China’s government is a party-state, and the word “party” is more important than “state” – the CCP penetrates the whole of society, including private businesses. (Those who ask whether the “government” in China intervenes in private business are asking the wrong question; it is the party that matters).

Ever since the 1980s, party doctrine has allowed tremendous amounts of economic decentralisation on everything from markets to tax rates. When convenient, the party has also turned two blind eyes to legal requirements – many successful Chinese companies have been in breach of tax laws for years at a time. Yet the party-state also keeps a grip on politics that has been tightening under Xi Jinping. Earlier this year, the millionaire Ren Zhiqiang was sent to jail for 18 years on charges of “corruption”. Many think his real crime was open criticism of Xi as an “emperor” with no clothes.

The party is increasingly intolerant of dissent because it sees criticism as an attack on its legitimacy. Yet it does not just seek to maintain control through repression. It is also engaged in a powerful long-term project to reshape Chinese identity at home and in the world. This orchestrated campaign is not just about image-making. It is at least in part about creating the conditions in which China can justify a greater role in the world, sometimes cooperative, sometimes highly confrontational.

In 2020, China has concentrated on mobilising recent history to shape present-day ambitions. This year in China, there has been significant commemoration of the 75th anniversary of the end of World War II. Over the whole post-Mao period, and the past few years in particular, China has become increasingly keen to stress its record during the war, and refers to it frequently in its domestic and international politics. China fought in World War II for longer than any other Allied power, from 1937 to 1945, lost more than 10 million lives and saw over 80 million of its population become refugees. Additionally, Chinese Nationalist troops under Chiang Kai-shek, with their temporary Communist allies, held down over half a million Japanese troops until the attack on Pearl Harbor finally brought the western Allies into the conflict four-and-a-half years later.

China’s role in World War II is not widely known or understood in the West. During the years of Mao’s rule, the wartime period was not much mentioned because it was politically taboo to mention Chiang Kai-shek’s contribution to winning the war in any positive way. Geopolitical shifts, including the desire to reunify with Taiwan (where the Nationalists had fled in 1949) and to put pressure on Japan, allowed much more public discussion of the war years after 1978, including the Nationalist contribution. Television dramas set during World War II showed Chinese soldiers mowing down their Japanese enemies; a massive museum of the war was built on the site of the original outbreak of war outside Beijing; in 2015, a parade commemorating the 70th anniversary of the end of the war was held in Tiananmen Square, presided over by Xi Jinping.

This revisiting of the war years has created a new narrative of China in the world. For many years, China saw its national story as beginning afresh in 1949, the year that Mao won the civil war on the mainland. That story is still immensely important. Over the years, legendary figures such as Lei Feng, a model worker from the 1960s nicknamed “the rustless screw”, have been periodically revived to burnish the “work-style” that underpinned the Communist revolution.

Yet there is another narrative heard more often now, that China’s rise to world power really began in 1945 as a victorious Allied power at the end of World War II. When he spoke at the Munich Security Conference earlier this year, Chinese foreign minister Wang Yi reminded listeners that China was the first signatory to the United Nations charter in 1945. He referred to an argument now mainstream in China: just as the US made sacrifices of blood and treasure to defeat Japan in the 1940s, which justified it in reordering Asia, so China too suffered to defeat the Axis, and should be assured the same rights.

To make this story work, the Chinese Communist Party is incorporating the achievement of the Nationalists, who were still in power in 1945, but that’s skated over in the official version.

The wider message is clear: China was a founder, and therefore a joint owner, of the current post-1945 global order. It is an argument that legitimises Chinese ambitions to assert territorial rights in Asia.

During the Trump years, Beijing has even been able to claim that the US has abandoned the order that it created in 1945, leaving only China as its true protector. A more internationalist Biden administration will provide a challenge to that narrative.

Still, the UN is not the only forum in which China defines itself through collective memory of that long-ago World War II conflict. When the Covid-19 pandemic broke out in February, the CCP declared they were waging a “people’s war” against the virus, the exact phrase used by Mao eight decades earlier for his struggle against the Japanese.

Constant references to the war let the Party argue that China should demand a privileged spot in shaping the world. But there is also a message – a warning – for its own people that China has been weak and threatened in recent memory, and without the CCP, might be again.

That combined sense of pride and vulnerability, underpinned by a willingness to take economic risks and limit political ones, shows itself in the treatment of some of the Chinese who fly highest. A few days, ago the IPO of legendary entrepreneur Jack Ma’s ANT Finance was pulled at short notice after the regulators expressed concerns about the instability that his huge online finance platform might cause.

But the very public nature of the rebuke was not accidental. China’s political leadership is increasingly wary of its tech aristocracy, who are among the few Chinese recognised as superstars abroad. The CCP was no doubt keen to show the most senior of those aristocrats that he should not nurture any ideas of becoming more powerful than the Party.

The Jack Ma episode shows the CCP looking both ways as it defines its project to its own people and the world. The party-state is genuinely proud of the entrepreneurial culture it has created and the economic boom that it has spawned. They feel, not without reason, that it shows that Marxist-Leninist politics and wild capitalism can coexist quite happily. But they always hark back to history, a narrative that reminds all Chinese that their nation and their ruling party are bigger than they are. 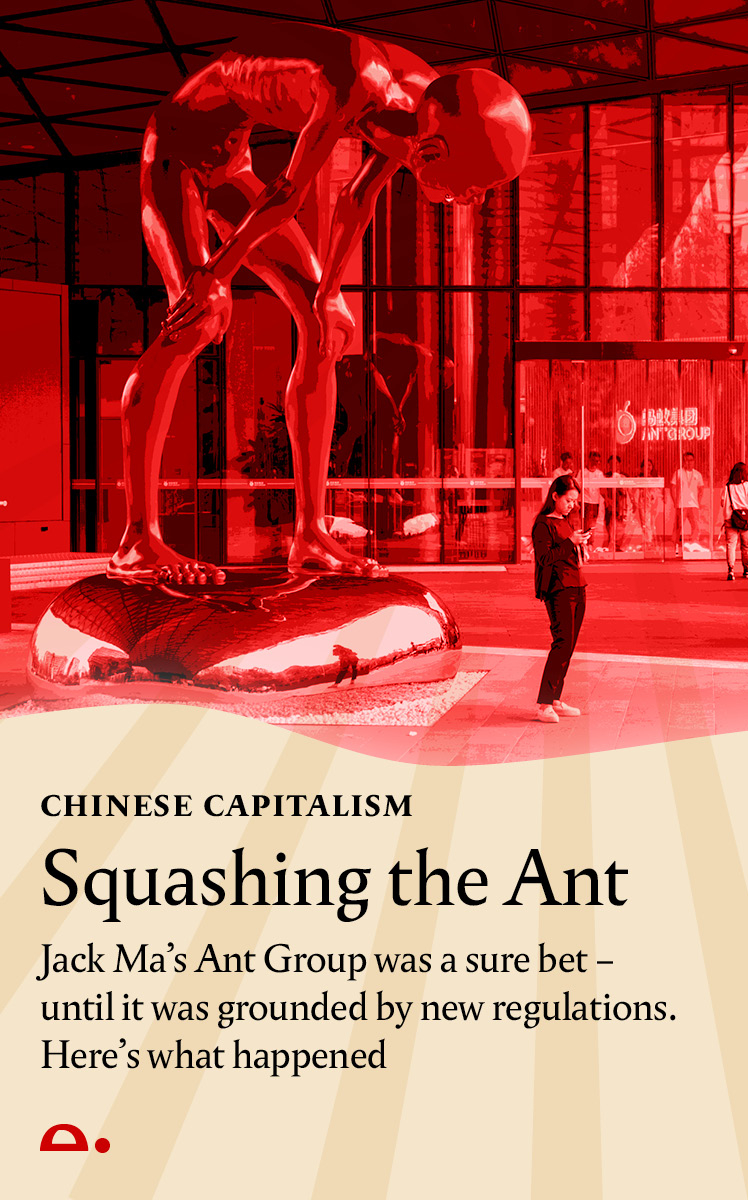 Ant Group, after a meteoric rise to international corporate stardom, has fallen back to earth. Or perhaps even been buried, by new regulations on fintech in China. What is Ant Group, and what was going on in the biggest IPO that never happened?