Trans Rights | Earlier this year, JK Rowling stepped into one of the fiercest debates of our time – gender and trans rights. Why?

Data journalist Luke Gbedemah reports on the dearth of reliable data about trans people, which has become a major complication in the fierce row over trans rights

The year 2014 was praised as the “transgender tipping point”. Trans actor Laverne Cox, star of the hit Netflix show Orange Is The New Black, appeared on the cover of Time magazine under a headline heralding trans rights as America’s next great civil rights frontier. It was the year Medicare, the US health insurance programme, was extended to to cover sex reassignment surgery. It was also the year that the American Psychiatric Association replaced “gender identity disorder” with the term “gender dysphoria” to better recognise the experience of trans people, without pathologising it.

But in the six years since these celebrated shifts, there has been little progress on, arguably, a more fundamental front. In 2020, the data on trans issues – the numbers of trans people in the UK, for example, or in the US – still does not exist. When it comes to transgender people, estimates are still largely pulled together by inference. Many trans people do not fit into narrow definitions, making it difficult to capture the full picture at a national level in surveys trying to quantify and measure gender identity.

The impact is significant: without big data, the scale of the issues faced by some trans people is also unknown. This has an impact on funding, on policy making, and on fundamental support for a community that is already vulnerable.

It is also impacting on online discourse. Where there are gaps in clear, robust data, a fight is thriving, largely on social media, about whether extending additional rights to trans people risks undermining other women’s rights. Both sides are accused of using partial or biased data. In June, JK Rowling, author of the Harry Potter series, intervened on this issue on Twitter and via an essay posted on her website. She was criticised for referencing allegedly dubious academic research and data on gender dysphoria in an argument defending her views.

Six years after a watershed moment in trans rights, the issue has never been so divisive, and the discussion online has never been louder, or more fraught. But what do we really know? What kind of data is actually gathered at a national level? And what does it tell us?

What data do we have?

Demographic data on the rates of “gender dysphoria” and the number of trans people who are transitioning is outdated, and poorly consolidated.

The UK Government Equalities Office’s National LGBT Survey is one of the largest in the world. In 2018 it published a report featuring previously unrecognised statistics on the mental health of trans people in the UK, measuring life satisfaction, discrimination, health service use, and much more.

The data incorporates responses from 14,040 people identifying as trans. In a summary report, the authors acknowledged that there has been a long history of poor collection of data, politically biased research and general underrepresentation of trans people in evidence gathered about social inequality in Britain. “Effective policy-making requires a sound evidence base,” the authors wrote.

In response, the Office for National Statistics has introduced legislation to incorporate sexual orientation and gender identity questions in the 2021 Census, and is looking at options for producing gender identity population estimates – which do not currently exist. This would plug a huge hole in the data available by providing a national, centralised estimate of the numbers of people identifying as transgender in the UK.

In 2016, the US-based UCLA Law Williams Institute, a respected source of statistics on transgender representation, estimated the number of transgender people in America based on extrapolation from two state-level surveys, and a number of assumptions from the Behaviour Risk Factor Surveillance System – a health-related telephone survey.

It found that 1.4m adults living in the US identify as transgender, an increase from 700,000 in 2011. Gary Gates, the demographer who conducted the analysis, noted himself that the methodology has “substantial limitations” in that it uses just 19 of the 50 states to build the model. Comparing the estimated population sizes for the UK and US to the number of trans people responding to the major surveys still shows that the level of uptake is very low.

In the US, The National Centre for Transgender Equality’s Transgender Survey is a key source of information about transgender employment, housing and health. The most recent edition has been delayed for at least a year due to the pandemic and the organisation has also faced accusations of racial discrimination from former employees.

Its 2015 study, compiled of 27,715 respondents from all fifty states, showed that 29 per cent of transgender people in the US were living in poverty – a much higher rate than the 12 per cent rate in the wider US population. The study also found that 39 per cent of transgender people had experienced severe psychological distress in the past year; and that suicidality among respondents was nine times higher than the national average.

Why is there so little good data?

Part of the problem at a national level is because the term “trans” or “transgender” is often taken to mean people whose gender expression differs from that associated with their sex at birth.

Dr Susan Stryker, professor of Women’s, Gender and Sexuality Studies at Yale University, said that the question becomes one of fitting the “square pegs of trans lives in the round holes of survey questions” in order to draw seemingly useful conclusions for policy-makers. This may be one reason why surveys are incomplete, and data on the LGBTQ+ population is insufficiently robust or representative.

Narrower studies tend to focus on issues like gender-affirming therapies, healthcare, education, reproductive rights, gender reassignment outcomes and other specific ways in which trans people engage with the state or with wider society.

Sophie Melville, Senior Research Officer at Stonewall, explained that “trans or transgender are defined quite differently, and often much more narrowly, according to who is conducting a piece research and its research questions”.

For example, “medical studies tend to ‘medicalise’ their definition and will often only define those who have already had gender-confirming surgery as ‘trans’. This means that the data collected is often incomplete, and cannot be compared across countries or with other datasets.”

In a recent and prominent case, the phenomenon of “rapid onset gender dysphoria” was shown to be a product of this misguided medicalisation of trans experience. As the name suggests, “rapid onset gender dysphoria” is a spur of the moment change taking place in vulnerable young people as a result of “social contagion” or peer pressure. The term was coined on the basis of a sole online survey of 164 parents, sourced through a handful of blogs which trans rights supporters have argued promote transphobic ideas. It is a symptom of the narrowly focused and potentially biased studies that have defined thinking about trans people to date. No such scientifically verifiable phenomenon exists.

Despite an official correction of the research article, the findings were deployed by JK Rowling and others to undermine the legitimacy of trans people’s self-identification – the report did not actually collect any data from the adolescents and young adults that it supposedly examined, and no clinicians were consulted. The study has been scrutinised and amended, but it raises questions about how inconclusive and potentially biased studies are informing debate, and by extension, policy-making.

Many people are appealing for better data, as well as consensus on research practices and clearer definition of terms to make sure that the findings produced are fit for purpose. Whilst the data is incomplete, policy-makers are left in the dark, and the debate about trans rights is mired in inconclusive and potentially biased studies. 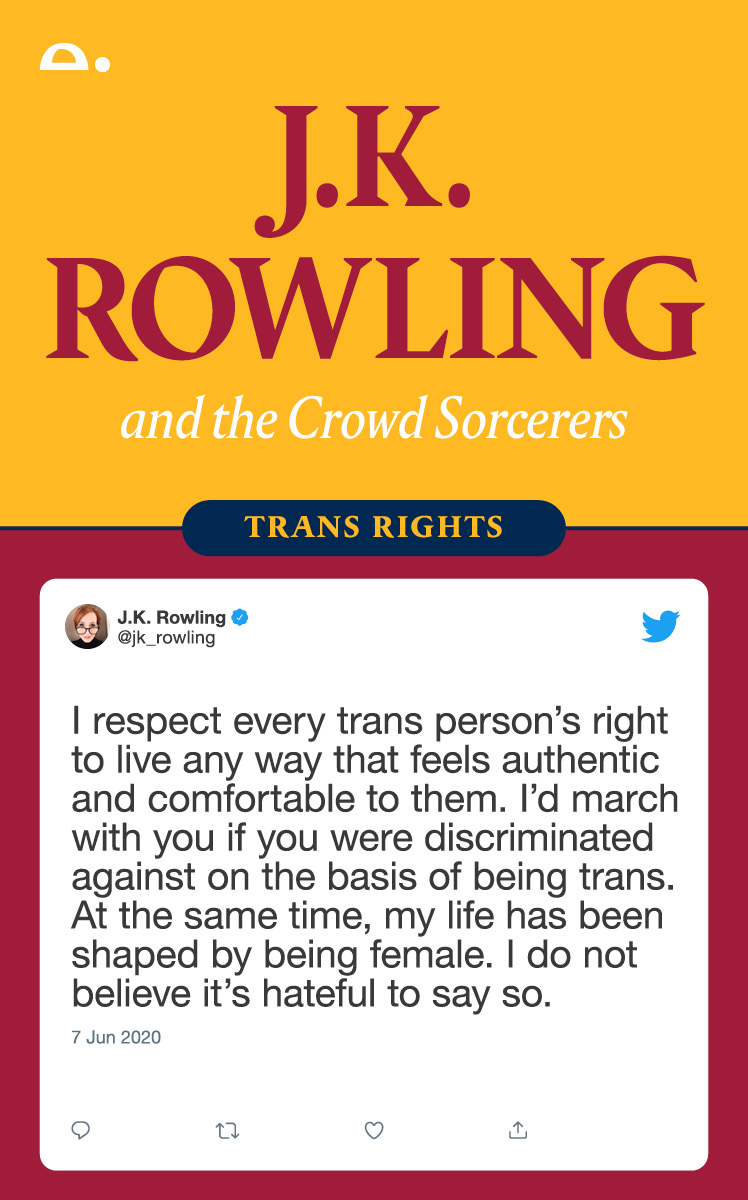 JK Rowling and the Crowd Sorcerers

JK Rowling and the Crowd Sorcerers

Thousands of trans people are turning to crowdfunding websites to help pay for treatment. Claudia Williams investigates a kind – if complicated – digital community