Battlegrounds | In the race towards US polling day on 3 November, we decided to look at electoral battlegrounds: the intellectual battle for the future of the Republican Party; Black churches’ fight for relevance in the Black Lives Matter movement; and Donald Trump’s determination to cling onto the Evangelical Christians who voted for him in 2016

The Black Lives Matter protests turned the summer of 2020 into a time of indelible images in America. Scan those images now and you can see anger, certainly, and a determination to wring change from tragedy. But if you set the images of 2020 against their predecessors in the long history of civil rights protests in the United States there’s one thing you don’t see: the Black churches are strikingly absent, not front-and-centre as they’ve so often been. Did Black Lives Matter mark the final moment of divorce between the church and civil rights protest?

The theory has been put forward that BLM revealed a basic incompatibility between Black churches and a new generation of civil rights leaders. Elderly, hierarchical and male-dominated institutions looked into the eyes of a young, diffuse movement, often led by women, and couldn’t make contact. On that telling of the story, Black churches have drifted into irrelevance after long decades of glorious service to a great cause.

The Rev Gregory Seal Livingston has been immersed in that cause for much of his life. A pastor and civil rights activist in Chicago, he has preached and practised protest through religious and secular organisations. I asked him to write an account – a sermon, if you like – to begin to answer that important question: does his church matter to Black Lives Matter?

I am an urban Black-American with Deep South roots. I’m a Christian, a preacher, a pastor, a prophetic servant of God for the public good. Through kin and skin, I am witness to the blood, sweat, toil, tears, lynchings, rape, chattel slavery and apartheid peculiar to the 400-year journey of the African kidnapped to America’s colonial shores.

However, I submit that 400 years is long enough to make a new people. The Black-American is the quintessential American. Our ethnicity is American. Our religion, our Christianity, our Jesus is Black…Black Consciousness.

Wrought, formed and forged in a white-hot crucible of oppressive existential suffering this Black consciousness transformed itself – matricised – into what Albert Raboteau called, ‘The Invisible Institution’ – the Slave Church. I claim an intimate understanding of the importance and power of the Historical Black Church in American history – and in this first-person reflection, I bear witness to the presence of the Historical Black Church in the Black Lives Matter (BLM) movement.

Simply stated – brick and mortar buildings, chapels, cathedrals and temples do not march, protest, fight and die – only the charred flesh, spilt blood, haemorrhaging spirits and embattled souls of the faithful overcome.

Are church folk flooding the streets resisting the establishment and pushing back to push forward for a racial reckoning, for racial justice? Yes. How do I know? I can see. I see choir members, congregants, youth pastors, ministry leaders, deacons, ushers – in other words, people just like you and I (I’m out there too!) standing in the shoes of the prophets, especially those of our prophetic civil rights tradition, offering our bodies as living sacrifices to effect change.

What in some circles is seen as the absence of the Black Church is a function of COVID-19, the pandemic. Black churches will always be free and independent meeting grounds. The beginning of the pandemic, however, closed all doors.

Ornate wooden doors were closed and digital virtual doors became the norm. What many of my colleagues and I have learned is that it is not virtual versus actual, it’s not an ‘either/or’ proposition but ‘both/and’. It is the 21st century adaptation of the antebellum Negro Spiritual replete and overflowing with the genius of double entendre – providing succour for the soul and codes for escape to Freedomland.

As in every century on North American soil the Indigenous Black-American Church/Historical Black Church has always represented something ‘other’ from the White-American Church and westernised Christianity. Earlier I defined the Slave Church as matricised Black Consciousness – a matrix, a womb.

The illegitimate Slave Church worshipping in secret was all we Black folk had as OUR institution. This institution, this womb would be impregnated by a non-Western, non-colonial narrative – the Word of the Master of all creation not the ‘Massah’ of a plantation. A slave preacher, like so many of his or her Biblical role models, expounding the Word of God.

Remember the Colonisers introduced the African to a westernised Christianity, a White Jesus. This Black Church spirituality has given birth to various resistance and liberation movements and leaders. Not just in America but around the world. When I say a prayer, drenched in Black spirituality, none of my BLMers attempt to shout or shut me down because they know I’m praying, preaching and protesting to get the oppressor’s knee off the necks of the challenged, the disadvantaged, the left out, the despised, the hated and the forgotten.

A church brutally conceived, mystically nurtured and defiantly progressive. A womb that yet echoes the words of Joseph the imprisoned slave who became Prime Minister of Egypt:

“But as for you, ye thought evil against me; but God meant it unto good, to bring to pass, as it is this day, to save much people alive.” (Genesis 50:20)

No ‘era’ in the Black struggle against American Apartheid has ever looked uniformly monolithic as regarding its resistance fighters, that’s mythology, but if your eyes can look past outward appearances and in the case of the Black Church look past the absence of Western religious insignia – and look instead with prophetic vision – you will see the unseeable, perceive the invisible and feel the Presence of God and our ancestors raging like a mighty burning fire shut up in our bones! You will see what W.E.B. DuBois calls ‘The Souls of Black Folk’!

The BLM movement is neither old nor new. It is the 21st century progeny of a 400-year old prophetic tradition. Black Lives Matter is not a new mantra but rather another mantra. In August of 1968, four months after the assassination of the Rev. Martin Luther King Jr., music icon James Brown recorded, shouted and sang this Black liberation mantra that blacklisted his career and was banned by white broadcast outlets across America ‘Say It Loud I’m Black and I’m Proud!’ Hear me: BLM and the Black Church will continue to shout, “Say it loud we’re Black and we’re proud because we are Black and Our Lives Matter.” Amen. 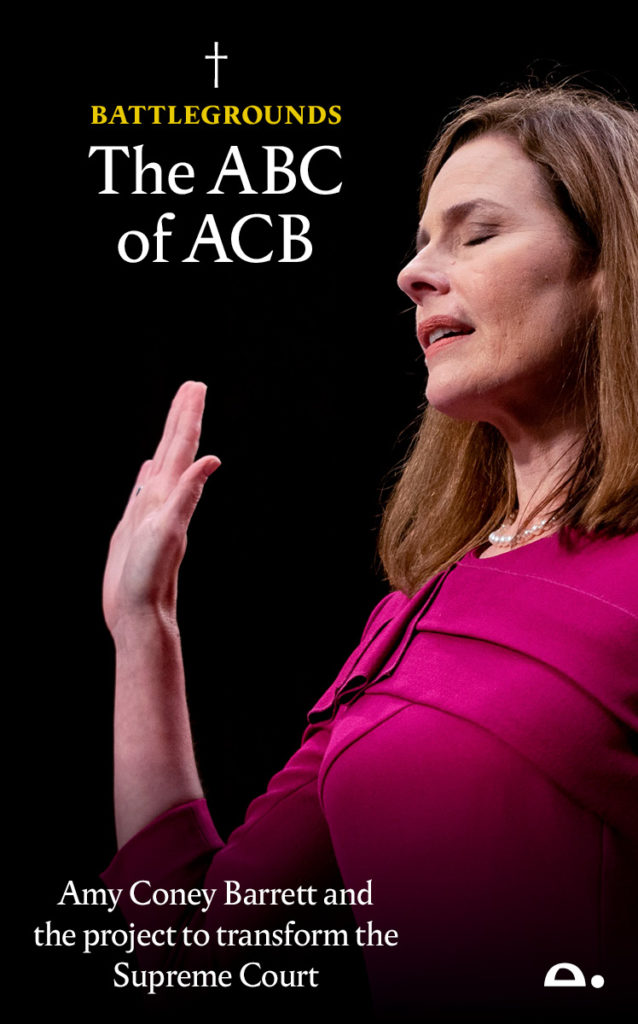 The ABC of ACB

The ABC of ACB

Amy Coney Barrett’s nomination to the US Supreme Court may be President Trump’s most enduring legacy. She revealed as little as possible during her confirmation hearings, but enough – if you look closely – to raise some big questions