Chris Cook has been tracking local spending data for the past six months. Here’s what it reveals about where the downturn is hitting hardest

The economy in England and Wales in 2020 is really a story of adaptation. There was an astounding thump as a large share of the country locked itself inside, as far as possible, in March: households cut spending by more than 40 per cent in the first week of lockdown. But, looking back over six months of data, the real story is how the country bent itself into new shapes to allow spending to resume.

Our analysis, based on the outgoings from a large sample of UK bank accounts, shows that we are now spending as much as we did on a weekly basis, as a country, as we did this time last year.

But this data, shared with Tortoise by SIB, a regeneration charity, reveals how strangely the money is now being spent. The data gives us a window into how British people are spending. It would normally be a flow of about £50 billion of spending per year – a decent-sized sample, roughly equivalent to about 4 per cent of UK household spending. We can see, to a ward level, how money is being spent each week.

And it raises big questions about whether these big changes are sustainable, especially as England starts imposing new restrictions on areas to contain the virus – and we need to think about the winners and losers so far.

Since the sudden stop in March, the recovery has been continuous and gratifyingly broad-based. The recovery is flattening out: the growth has now stopped – but at a high level. Of the 172 areas that we have used to analyse England and Wales, only 37 are recording sales that are lower than the same week last year. Only 14 are more than 5 per cent down.

The scars of the past six months, however, are deep. The average town has suffered an 11 per cent loss of revenue over the past six months. Only a handful of towns have seen more income flow through their towns this year than last – usually the homes of major card-processing centres and online chains.

The category of towns which, as a class, are still suffering the most are transport towns. Ashford, a rail link, is in second place both in terms of its continuing losses and its total hit. The areas around Heathrow, Gatwick and Luton airports are also in dire, particular need. The unlocking has never been complete enough for them.

One town, in particular, has seen an extraordinarily weak recovery: Peterborough still has one quarter less money passing through the local tills than in the same week last year. It is also the town that has suffered the most in total: the amount of money that has been taken by local businesses over the past six months is 38 per cent down over the same time last year. It is a retail hub, as well as being strongly reliant on its railway link.

Even within towns that are doing well in total, other painful shifts have happened. We can see that local grocery shops saw booming business: at the very height of the restrictions, people stuck in their homes spent one third more at grocery shops. But Britons are still spending one quarter more at these outlets. That is (surely) at the expense of other shops.

Similarly, early on, we identified wards where a large share of business had been done with very local people – living within one mile of the outlets. Shopping local was a requirement of lockdown, so these wards did very well. These 10 per cent of wards have held on to this advantage after lockdown as people continue to take precautions, a larger number of people still work from home, and new shopping habits start to stick. Again, this is at the expense of other places.

We also know that spending on the arts, which has largely not been able to profitably adapt its venues to the needs of social distancing, has collapsed. A lot of spending on services has been ditched, nationwide, for goods. Luxury has become things you can order in.

Indeed, the online has superseded the in-person. Take two areas in central London. First, Hoxton – which is home to Amazon, among other online companies around Silicon Roundabout. And, second, the two wards making up the West End – London’s traditional high-end shopping district.

In June, Hoxton more than doubled its takings from British card-holders compared to the same time last year – while takings in the West End had halved.

In October, takings by the online hub were still up by 70 per cent. One pound in every 30 now goes through the ward. Meanwhile, the West End was still down by 9 per cent. Oxford Street and its surrounds will also be suffering because of the lack of foreign spending, something outside our sample.

One adaptation was a retiming of economic activity. Early on, the hardest-hit places early on were tourist towns, which missed their usual Easter season and early summer. Since 4 July, the relaxation of regulations around hospitality led to a summer surge: picking the ten towns with the largest concentrations of jobs in different industries, you can see how tourism-led areas have been massively outperforming their usual spending levels.

Penzance, a Cornish town I wrote about earlier this summer as it struggled with heavy losses, is now recording one quarter more spending than in the same week last year. Wadebridge, a regular (very small) town in the top ten worst-affected areas, is now enjoying a colossal surge – up 80 per cent on last year.

But they have not recouped their losses. A big surge during a slow period does not make up for a big loss in a busy one: over the past six months, Penzance businesses have taken 13 per cent less than last year. In Wadebridge, they are 7 per cent down.

What this data does not show is the distributional effects of the lockdown: the loss of jobs, the loss of job security and dropping incomes. But one factor underestimated in the past year was people’s willingness to try new things: there are more substitutes for old goods than we perhaps thought.

Holidays are a microcosm: when lockdown lifted, people figured that it was worth trying to get out of the house, and they spent money on things they otherwise might not – like holidays in the autumn.

As we contemplate the period ahead, however, there is one town whose experience ought to haunt policymakers. Leicester had a grim time during the first lockdown. There was a growing outbreak even while the city was suppressing economic activity. So while the national rate was brought down, the city saw no such relief.

As a result, the city was pushed back into stricter measures in early July: schools were shut once again, non-essential shops were closed, and only takeaway food purchases were permitted.

An optimist would note that, even in lockdown, adaptation meant that economic activity crawled back up. But the city has yet to experience a single week on our measure when spending has returned to the same as last year. Overall, Leicester businesses have seen 26 per cent less income through the tills over the past six months – more than double the average losses.

Conversely, businesses within the bounds of the city of Manchester, which moved into its own category of weaker special measures in August, saw little sustained hit to spending. Its spending roughly tracked national activity, as it did throughout.

Google’s tracking data gives a hint as to why: the restrictions in Manchester did not weigh on activity. This data gives an estimate of footfall in retail and recreation settings: the Manchester regulations on avoiding household mixing had a modest effect. This does not mean the measures had no cost, but spending seems to have been displaced inside the city, not moved out of it.

You can see similar effects with Bolton. Google data gives some evidence that Bolton has seen a slight drop in footfall after it was forced to introduce tougher specific rules to limit hospitality. Pubs and restaurants are obviously suffering. But there is little sign of a reduction in the overall spending data for Bolton. Despite the lower footfall and a specific hit to hospitality, there is still higher spending than at the same time last year – although, of course, this will be scant comfort for businesses really feeling the pain of these restrictions.

Given the limited economic impact, if the interventions in Manchester and Bolton had successfully contained the virus, they would be worth a lot of study. Against the headwind of the arrival of students in September, however, neither set of measures has been effective.

Navigating from here is tough: we have never had a recession like this before. We still do not know which changes in spending are permanent and which are temporary. Unemployment is rising and will rise further. Almost no-one has had a good year – and lockdowns do carry a cost.

Looking ahead, there are a few things thrown up by the Corona Shock data.

First, the speed, scale and durability of future adaptation is a mystery. This data does explain some of the relative optimism of institutions such as the Bank of England: people will not wait for their favourite outlets to reopen, but will try new things.

It is possible that we could recover from this crisis much faster and with less bruising than many forecasters believe. But, at the same time, the social effects of it could be very large. This crisis could disrupt how we consume dramatically. And we cannot say which habits will stick.

Genevieve Maitland Hudson, head of research at SIB, says: “As more places see a return to normal spending patterns, we need to think about how investment in the recovery period can create fairer communities.”

SIB is considering so-called “regional Public Holding Companies” to buy up at-risk businesses which can keep social infrastructure alive. “Many places will need this kind of investment to back jobs and wages alongside social infrastructure, responding to both the loss of local revenue and the looming jobs crisis triggered by Covid-19.”

Second, the data for Leicester highlights the need for support for areas going into local lockdown: the cost to Leicester was large and significant. Local leaders should demand proper support. The regulatory jolt from moving from what the English authorities now call “Tier 2” (high risk) to “Tier 3” (very high risk) is not as severe as what Leicester went through – but the numbers involved are troubling.

Third, for all the businesses that cannot open safely at the moment, there is no way back except ending this crisis. This is true in areas affected directly by outbreaks – but also towns that are not. Restaurants in Manchester and Bolton have supply chains that stretch out across the UK. And new habits are being formed that may make it harder for struggling businesses to recover. Suppressing the virus is the only way to get back to growth for the whole country.

The big shock to confidence over the past month has been the realisation that the state’s track and trace capability is so feeble. Whatever the cost of making it work, pay it.

This essay is part of Tortoise’s File on Recession 2021. To see the rest of the File’s contents, please tap here. 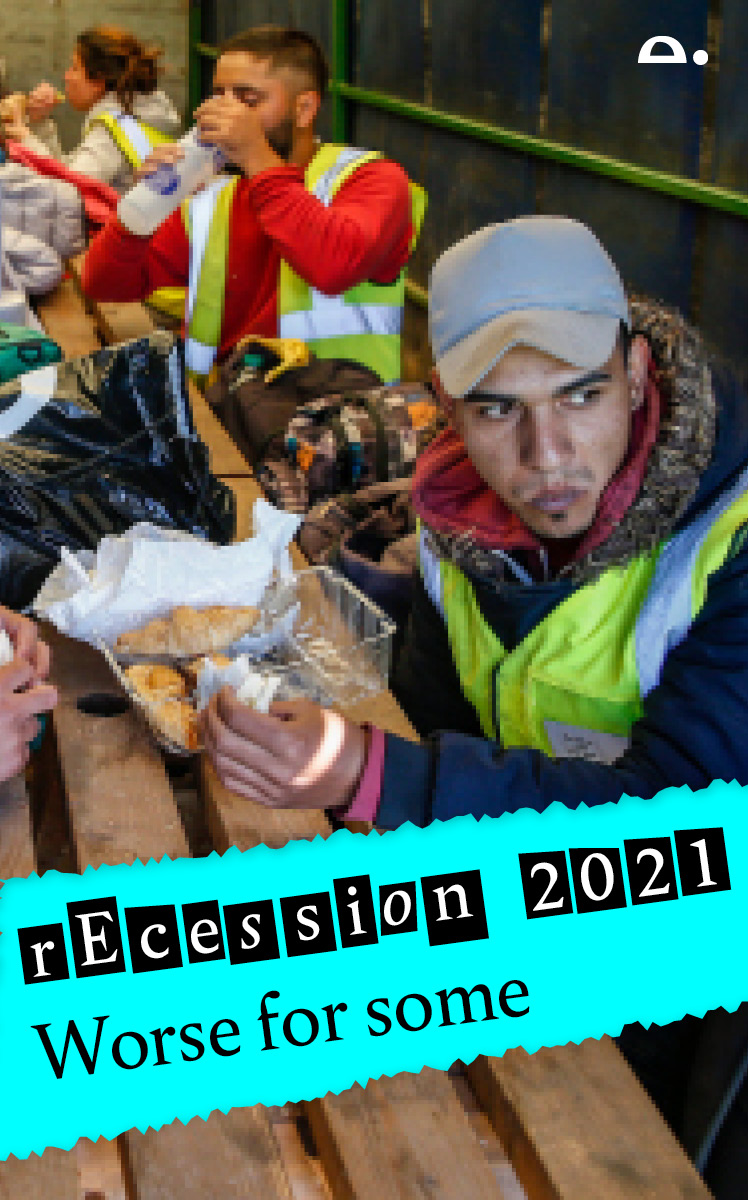 The economic pain is being felt differently by different people. For many of them, warns Torsten Bell, rock bottom is still to come