This essay is part of Tortoise’s File on Recession 2021. To see the rest of the File’s contents, please tap here.

The clash between the mayor of Greater Manchester and the chancellor of the Exchequer is the first significant political contest of the age of coronavirus.

For the seven long months since the pandemic took hold in Britain, politicians of both main parties have been dancing around each other – with Labour incredulous at the parade of government missteps but mostly unwilling to undermine the bipartisan consensus.

Now – much more significant than Labour leader Keir Starmer’s demand for a “circuit-breaker” national lockdown – we have a disagreement of substance between the centre and a key region that will determine the nation’s financial response to the crisis and its finances for many decades to come.

On one side, Andy Burnham, for Greater Manchester, is demanding more government support – equal to the 80 per cent of wages offered in the initial furlough scheme – for those unable to work because of the proposed tightening of restrictions in his area. On the other, Rishi Sunak, the chancellor, says the country cannot afford it.

The chancellor has been prepared to spend a lot, first because of the “levelling up” agenda and then because of the virus, but has emphasised that fiscal prudency should be a concern. A fortnight ago, he set out what it is to be a Conservative in the time of coronavirus at the Tories’ virtual party conference, saying that the vast sums borrowed by government would have to be paid back eventually. The Labour opposition might be casual about the national finances, he argued, but the country could not afford to be.

“How, though, will it be paid down?” is one legitimate question. “Who by?” a more pointed version. But perhaps the best thing to ask is whether the debt really needs energetic and immediate attention at all.

Nobody can deny that the sums are huge. The independent Office for Budget Responsibility, which has taken a comparatively upbeat view of the likely economic bounce back, reckoned – before the apparent “second wave” of the virus broke – that the government’s rescue package would cost in the region of £300 billion this year, around 15 per cent of national income. More pessimistic projections put the price tag at £500 billion.

These are by far the biggest such sums for peacetime in the modern era; comparably astounding spikes in government spending have tended to be the product of war.

Getting the support in place as quickly as possible was the government’s initial priority, rather than the cost itself. It is quite an achievement that the furlough scheme and other major financial assistance programmes were implemented so quickly.

For all the mess of exam results and of Test and Trace, and the slow pace with which business loans were processed by the banks, the speed with which the government managed to get cash into people’s hands is – considered in the round – perhaps its greatest achievement of the crisis.

That speed points not just to systems long in place (HMRC and the Department of Work and Pensions had details of people’s bank accounts already in their records), but also to years of investment in digital improvements, such as the infrastructure that makes possible the much-maligned Universal Credit.

In practice, the options available to the government in handling this debt are limited. They include another severe round of public spending cuts (for which there is absolutely no public or parliamentary appetite); big tax rises (ditto); economic growth (always the ideal, but hard to depend upon in the circumstances); inflation (attractive in many ways, but not an immediate prospect and hazardous for obvious reasons).

The final option is inelegant: namely, to choose a little bit of all of these remedies, and to add a very long delay to the recipe. Whatever Sunak says now, the politics of the case point to this combination of fiscal eclecticism and strategic postponement.

Start with public spending cuts. After a decade of austerity following the 2008 financial crisis, there is no public appetite for more of the same. The parliamentary Conservative party feels that way, too: David Davis, former secretary of state for exiting the European Union, has called the idea “bonkers”.

No matter that “austerity” was never as austere as George Osborne, the former chancellor, implied at the time. It did still deprive the state of meaningful chunks of cash. At first, many of the cuts were relatively easy, and public service standards were more or less upheld while budgets were trimmed. But eventually the quality and breadth of provision suffered.

That was particularly true of local authorities, responsible for social care, whose budgets were gutted. The effect was to limit dramatically the ability of care homes to respond to the coronavirus. Waste had been cut out, but so too had resilience or spare capacity; a shortfall that has recently been exposed in our hospitals.

Yet even the savings of the past decade would not have been enough to contain the deficit – the amount by which government spending exceeds its revenues – for long. Demography was already making fiscal conservatism obsolete.

Well before the virus hit, the growing cost of increased life expectancy was set to make the deficit expand dramatically. The rising bill for healthcare, dementia care and pensions was on course to squeeze out other public spending or force increased borrowing, as the Institute for Fiscal Studies has consistently pointed out.

If public spending cuts will not do the trick, what about tax rises? Sunak has indicated several times that such hikes cannot be ruled out – saying as much when forced to postpone the Budget that he had planned for November, and again at the Conservative party conference.

Which taxes, and on whom? The panel Sunak had commissioned on capital gains tax will report back soon. Many expect it to recommend taxing capital gains at the same rate as income tax, hitting higher-rate taxpayers. The Treasury is also looking into reducing the pension benefits for higher-rate taxpayers, and (yet again) into the controversial question of inheritance tax.

Even so, there is general agreement that raising such taxes would not raise anything like enough money. They tend to bring in a comparatively small share of overall tax revenues, far smaller than the “big three” of income tax, national insurance and VAT. And the Conservative manifesto vowed not to increase this ring-fenced trio, while also committing the government to maintaining the expensive “triple lock” on pensions.

At the party conference, the chancellor managed to dodge the question of whether he would break either of these manifesto promises. It is conceivable that he will do so when he does finally stand up to deliver his Budget in the spring – but certain that he would face huge opposition from those within his party who fear such measures would jeopardise growth when it is most needed.

So if spending cuts and tax rises are inadequate, what about growth and innovation? Preserving jobs that are thought to be viable once the crisis has passed – and trying to retain at least splinters of the agenda for “levelling up” the country – has clearly been the government’s preferred answer to the problem.

But while the government is still imposing restrictions on social behaviour to curb the virus, it is hard to project what growth might eventually be, and when. And it’s even harder to anticipate which types of businesses will survive and thrive into the future, and where they will congregate.

It’s also doubtful whether this emergency will provoke a wave of innovation in the way that wars have done in the past. True, the digital revolution will continue to bring value for money, not least as more people work from home.

But it is all too easy to misconstrue this process of change – already well underway – as an economic silver bullet when it is no such thing.

Of course, there will be some areas of actual innovation: vaccine development and scientific collaboration, as research teams across the world work to complete their own pharmaceutical Manhattan Project. But, important as they are, these are isolated instances, rather than an flourishing of animal spirits in society as a whole. Against them, we must weigh the cost of a year’s badly disrupted education for many schoolchildren, not something that is likely to yield a burst of creativity and wealth generation.

Some have wondered whether a dose of inflation would be the best way to begin reducing the cost of the borrowing that has been accrued. Historically, that is indeed one way that countries have solved the problem of national debts that otherwise looked unmanageable – and government strategists acknowledge it has attractions. But there is not much sign of this happening at the moment. And, as anyone with memories of the 1970s will warn you, the collateral damage of inflation is often appalling.

Given the limited contribution that each of these approaches is likely to be able to make, the option attracting more attention – even in the parliamentary Conservative party – is to accept that the debt will not be brought down by much for decades, or even to argue that it does not need to be paid down at all. Advocates of this position argue pragmatically that the markets are not rattled by the present level of debt, that the interest rate the UK is having to pay is extremely low, and that the priority is to spend to get the economy moving.

When one surveys the fiscal and political landscape with any candour, it would be astonishing if this approach, or something close to it, didn’t, in the end, prevail. It would not be surprising if the answer ended up being: a handful of tax rises, a bit of inflation, doing everything possible to nurture growth – all while not actually making a sustained or strategic effort to pay down the debt for a very long time.

Yet Sunak is not admitting this yet, and certainly not during his spat with Burnham over whether the country can – or cannot – afford to pay 80 per cent of the wages of those told not to work.

Let us see whether the chancellor relents. Otherwise, out of concern for repairing the national finances, he may be premature or – worse – unnecessarily prudent, fighting a battle that neither his party nor Britain’s international lenders are calling on him to fight. 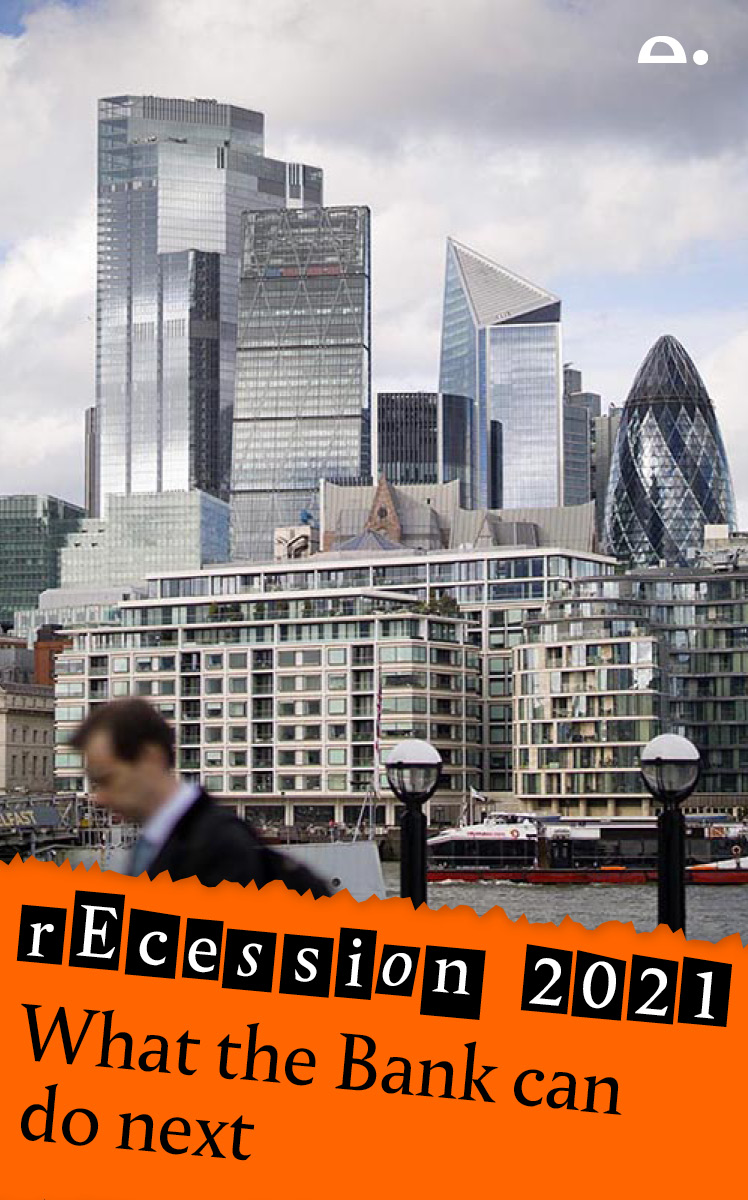 What the Bank can do next

What the Bank can do next

Not much, says Tony Yates – although that doesn’t mean it is entirely impotent