I work in a hut that stands on a floodplain on the edge of the Broads and I often see marsh harriers from my desk: wings in a shallow dihedral, balanced on the edge of a stall, a bird of prey and a virtuoso of slowness.

They’ve been extinct once, almost twice as a British breeding species. They were shot to buggery during the great Victorian persecution, when nothing but pheasants were permitted to live, but came back during the First World War, as birds from the continent flew over and British people had other uses for men and ammunition.

But in 1971 they were back down to a single pair, this time because pesticides, notably DDT, had entered the food-chain and damaged the species at the top of it. Since then, with DDT illegal and widespread restoration of marsh and reedbed, they are doing better than they have for centuries: around 400 nests every year.

In the high heathery moorland you find a different species of harrier. Hen harriers are in sharp decline, because of illegal persecution by grouse-shooting interests. Do hen harriers have the right to exist? Or is it right that they be sacrificed for human pleasure and profit?

Rights are for humans, right? So ascribing rights to anything non-human is wrong-headed, sentimental and flying in the face of reason. That is, and has always been the dominant philosophy of the planet’s dominant species.

Where is the logic for this stance? It requires an adamantine line separating humans from the rest. But we have getting on for 98 per cent of our genes in common with chimpanzees. We share an ancestor with orang-utans, with monkeys, with bats and dolphins and lions, with, if it comes to that, every single thing that lives on this planet.

Humans are just one more species of mammal. We have our being in the phylum of chordates along with sharks and frogs and marsh harriers and the blue whale, in the kingdom Animalia along with butterflies, nematode worms and the giant squid.

We think ourselves unique, but we’re not. Many other species have culture, passing on information, skills and traditions in a non-genetic inheritance. Apes have been trained to use sign language, parrots to use a large spoken vocabulary correctly. Non-human species teach, grieve, understand death, possess self-awareness, recognise individuals of other species, assign themselves names, practice altruism and have ties of affection and blood. Sense of humour? A signing gorilla tied his handler’s shoelaces together and then signed “chase”. Religion? Chimpanzees have been seen in a state that looks like religious ecstasy: both stories from scientific observers.

Freud listed three philosophy-shattering blows to human self-esteem. The first is the discovery of Copernicus that the earth is not the centre of the universe. The second is Darwin’s revelation that humans are a species of animal. The third he modestly put down to himself: we can’t even console ourselves with the idea that we are rational animals.

That hasn’t stopped us from running the world as if humans were a sub-species of angel. The old idea of the scala naturae was set out by Aristotle but is no doubt still more ancient: rocks on the bottom, plants next, “lower” animals after that, followed by “higher” animals — and above them, quite separate from the rest, us humans. We’re below only the angels and God. We live by this doctrine today, even though we’ve largely done away with God.

Of course we are above the rest – and we have the obvious right to do whatever we like with lesser beings. It’s the argument that supported slavery for centuries.

We have lived by the assumptions of the scala naturae since the invention of agriculture 12,000 years ago, when we started to control our environment. Over the centuries we have successively extended our concern beyond family, tribe, nation, religion and race.

In the 1970s we began to extend the idea of rights beyond gender. In the same decade the Australian ethical philosopher Peter Singer published Animal Liberation, in which he proposed the above theory of expanding circles of concern. The logical next step, he said, was to extend our concern – our idea of rights — beyond species. He coined the hissing term speciesism to explain it.

Naturally there is resistance to this. Many resisted the abolition of slavery on the same ground: widening your areas of concern is inconvenient and expensive. Do chickens have rights? Not the right to vote or to send their chicks to university, but to live a decent life. A chicken can live a dozen years in good conditions: battery chickens live for six weeks, 20 to a square metre, sitting in their own ammoniac waste, often with their beaks cut to discourage fighting. Is that right? Or is it OK, so long as we don’t have to watch?

We mostly accept that at least some of our domestic animals have a right not to brutalised. The Society for the Prevention of Cruelty to Animals was formed in 1824 and got its royal charter 16 years later; laws now make a great deal of wanton cruelty illegal. We seem to accept that a puppy has a right not to be tortured (outside a laboratory, anyway).

Does that idea of rights extend into the wild? Do humans have the right to shape the entire planet as we feel fit? Scientific consensus has named the present geological age the Anthropocene: over the last 200 years humans have brought about almost as much change over the planet as the meteor that ended the dinosaurs 65 million years ago: and we’ve only just begun.

People mostly agree that non-human species (at least, megafauna like tigers and elephants) at least have a right not to go extinct; i.e. we can destroy as much as we like so long as we have a few pandas to prove our righteousness. All the same, the Northern white rhino went extinct in 2018.

Philosophy is all very well, but as every politician knows, what matters is not what’s proven but how people respond. The reaction to George Floyd’s killing was not a new philosophy but a mighty surge of shared outrage: no, you can’t do that. Will we reach that same shared and global anger over non-human species?

Some ideas are spreading especially among the young: veganism, vegetarianism, the need to prevent extinctions, the need to act with extreme urgency on climate, the need to protect not just biodiversity but bioabundance, the idea that non-human species should be valued for themselves. Perhaps there will be a new consensus of rights and who possesses them.

I am one of the last humans on the planet to have seen a slender-billed curlew. It was feeding quietly on a patch of wild ground in North Africa. The species is almost certainly extinct. I have seen vast level plains of freshly-felled rainforest. Have we violated their right to exist?

We humans have taken control of the planet. It seems to me that only one question remains. What kind of god do we want to be? 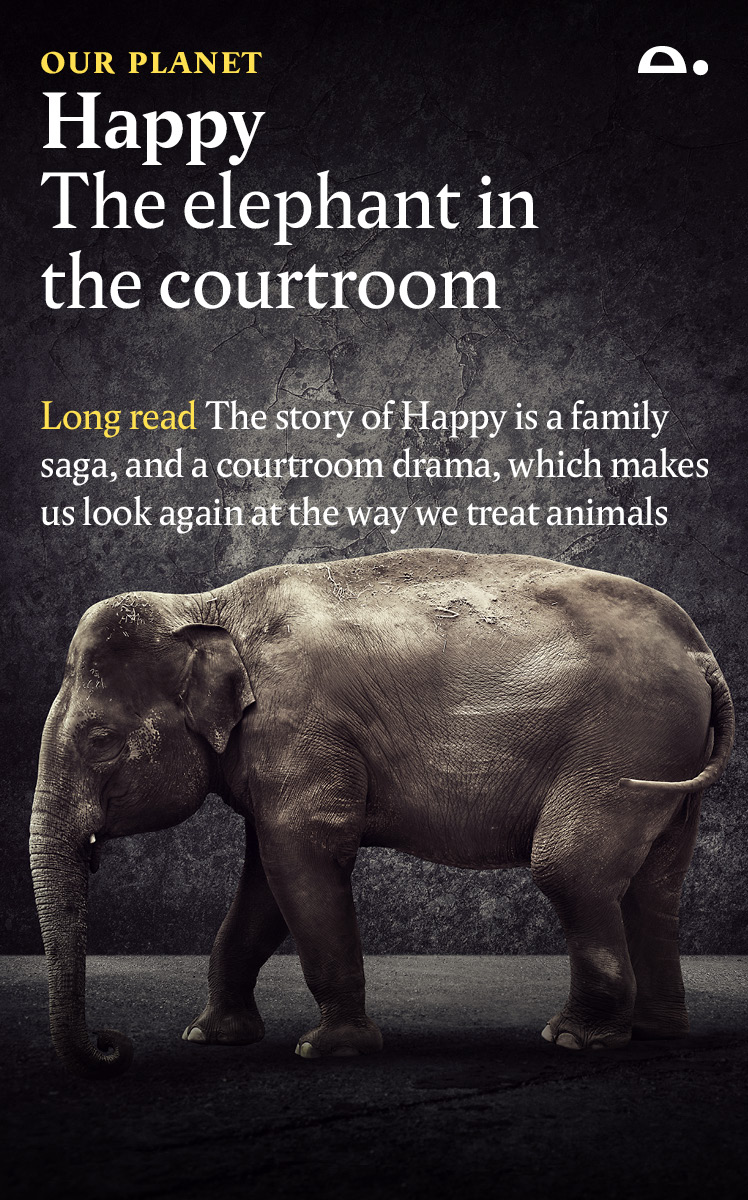 The case of Happy the elephant

The case of Happy the elephant