Dido Harding seems to make a habit of taking on roles for which, on paper, she is unsuitable.

At private school, she was captain of the basketball team despite her diminutive stature. “At 5ft 3 inches she was captain which just seems ridiculous when most basketball players these days are 6ft 10,” recalls an old school friend. “She was small and determined.”

So it is perhaps no surprise that Harding, 52 – a Conservative peer since 2014 with the full title Baroness Harding of Winscombe – is currently heading up the NHS Test and Trace programme, a key strand of the Government’s response to the Covid-19 pandemic, and the newly formed National Institute for Health Protection (NIHP) which replaces Public Health England, despite having no scientific training.

She has even been tipped to be the new head of the NHS when the current chief executive Sir Simon Stevens steps down.

Her rise has triggered criticism from the medical profession, NHS officials and opposition politicians that it is her Tory loyalty rather than meritocracy that has landed her the jobs – although whether a man in the same position would have received quite so much criticism is debatable.

Critics point to the fact that she is married to John Penrose, Tory MP for Weston-Super-Mare, who sits on a think-tank that recommends privatising the NHS and public health services. Parts of Test and Trace have been outsourced to the private sector.

“Dido seems to be failing upwards, given that Test and Trace has been a disaster,” said one NHS official of her appointment as head of the NIHP, which will incorporate NHS Test and Trace.

Dr Michael Head, a senior research fellow in global health at Southampton University, told me: “Pandemic management is being left to people like Dido Harding, who brings the same amount of expertise and flair to this job as I would to the role of Director of Shepherds in a particularly tricky time for sheep farming. The pandemic will hurt the UK for a long time to come yet, and there are many contributory factors. Inappropriate leadership at the top is one of those reasons.”

Even the Tory-supporting Telegraph newspaper described her “unstoppable upward rise” as an “egregious example of the chumocracy at work”.

Yet Prime Minister Boris Johnson and Health Secretary Matt Hancock remain 100 per cent behind her.

“She is simply the best person who could be doing this job now,” said Hancock of her appointment as head of NIHP, while in PMQs Johnson recently described criticism of her as “unseemly and unjustified”.

There is no doubt that she has the intellect and confidence to take on these high-profile roles.

After growing up on a pig farm in Dorset, she studied Politics, Philosophy and Economics at Oxford, where she is said to have been good friends with David Cameron, and then an MBA at Harvard University. She started work with management consultancy McKinsey, moving on to senior corporate roles at Thomas Cook, Tesco and Sainsbury’s before becoming chief executive of TalkTalk in 2010 and then chair of NHS Improvement in 2017.

But a huge data breach at TalkTalk in 2015, where almost 157,000 customers’ personal details were stolen, and for which the company received a record-breaking £400,000 fine from the Information Commissioner’s Office, left a stain on her reputation.

She was accused of not knowing what was going on during the crisis and there were calls for her to resign, although she stayed on at the company.

Ultimately, she resigned from TalkTalk in 2017, 18 months after the company was hit by the cyber-attack, saying she wanted “to focus more on activities in public service”.

She said that her decision to leave had nothing to do with the cyber-attack which she said was “ancient history”. It was reported at the time that she was paid her full £550,000 salary for the year, despite only working two months of the company’s financial year before she left.

None of her previous roles, however, left her facing the intense public scrutiny she is under today.

When she told a Commons Select Committee that no-one was “expecting” the “really sizeable increase in demand” for testing when schools returned after the summer, she provoked a wave to disbelief on social media, best summed up by the tongue-in-cheek Twitter comment: “Dido Harding was very surprised to see the sun come up this morning.”

Critics said the job should be done by public health specialists rather than a businessman. But Harding defended the decision saying in an email to staff that Coupe would “bring a wealth of experience in large scale supply chains, logistics and digital transformation”. The team at Test and Trace also includes a former head of HR at Sainsbury’s and a former digital director at Waitrose.

Then in another high-profile blunder this week, it emerged that almost 16,000 Covid-19 tests went unreported and led to a delay in efforts to trace contacts of people who tested positive for the virus. The large scale error appears to have been caused by a failure to grasp the limitations of an Excel spreadsheet.

Amidst the clamour for her removal, where does Harding’s extraordinary confidence and resilience come from?

According to Harding herself, it is her grandfather Field Marshal John Harding, who was the commander of the Desert Rats in the Second World War.

“He came to London as a clerk in the Post Office in 1914. He signed up as a soldier and finished his career as the head of the British Army,” she said in a newspaper interview in 2015.

“He taught me at a very young age that it is possible to aspire, to move yourself up. He was my inspiration. It was a very military family, so all the role models were male. I was the bolshy 12-year-old in careers class who said I didn’t want to be a secretary, I wanted to have one. Everyone laughed.”

People who have worked for and with Harding over the years are not surprised by her rise to the top; juggling work, home life (she has two daughters) and her hobbies (she is a horse racing fanatic) is her modus operandi.

One business leader, who worked with her for four years while she was CEO at TalkTalk, recalls her military-style multi-tasking.

“The first time I met her in person, she was training for a marathon, as was I (which she completed in 4 hours 46 mins, for the record, and raised nearly £8,000 for charity).

“She and her family came to stay as we were both about to take part in the same equestrian competition.

“At her suggestion, we went for an 11 mile run at 6.30am during which she talked me through her business strategy, she was home for breakfast with her children and then wanted the fastest and bravest horse for the equestrian competition.

“She is incredibly driven, has phenomenal energy and I always warmed to her.”

She is also no pushover having worked with tough task masters like Terry Leahy, the former Tesco boss.

“Working for supermarkets 20 years ago as a woman was pretty difficult – the environment was aggressive and sexist, business was done on the golf course and she was often the only woman in the room,” says another former colleague.

“Dido knows how to survive in a difficult male-dominated environment and is amazingly resilient; she talks very directly, calls out a problem and pushes people out of their comfort zones in order to bring them on.

“She makes you a much more rounded leader and was the most important mentor I could have had, but she is tough and not for everyone.

“Ultimately, she is a politician. She loves lobbying and will argue a point of view until she wins.”

Harding is well-respected in the horse racing world where she has been a member of the Jockey Club since 2004, joining the board in 2018.

Not only did she win 25 races as an amateur jockey (she retired reluctantly at the age of 40) but Cool Dawn, an Irish thoroughbred horse she bought with a loan for just £7,000, won the 1998 Cheltenham Gold Cup despite being a 25 to 1 outsider.

Former professional jockey Andrew Thornton, who rode Cool Dawn to victory that day and has known Harding for around 25 years, said: “She is good fun and when you meet her you wouldn’t know how well she has done in her career. She is very approachable, down to earth and she treats everybody the same.

“If I had to describe her in a nutshell it would be that she is determined to make other people’s lives better.”

But it has not always been plain sailing.

After marrying John Penrose she struggled to fit into the Tory wife mould.

“I pretended to be a Laura Ashley dress-wearing Tory wife. But I went home every night wanting to kill him. Everyone saw through it anyway. Of course I want him to be successful, but it’s his job, not mine,” she has said.

Her answer was to throw herself into her career and she has certainly had success as one of the few women to have run top companies and organisations in Britain.

Is she up to the unprecedented challenges that coronavirus presents?

“She has gone headlong into the eye of the storm and will love being at the centre of everything for all sorts of reasons; affirmation and the opportunity to change something that is so fundamental to all of our lives using her extreme intellect to the best of her ability,” says a former colleague.

“She must be exhausted but she is tough, couldn’t be more determined and, being a politician, she enjoys the public scrutiny.”

Last month she admitted she sent her daughter to school with a sore throat because it was not a Covid symptom (symptoms of the virus are a temperature, persistent cough and loss of taste and smell).

“My 13-year-old daughter got up this morning and said she had a sore throat,” she told a CBI briefing. “I gulped, I took her temperature, I checked she wasn’t coughing, I checked that she could smell breakfast and sent her to school. Everyone needs to make those judgments every day to manage supply and demand (for testing).” 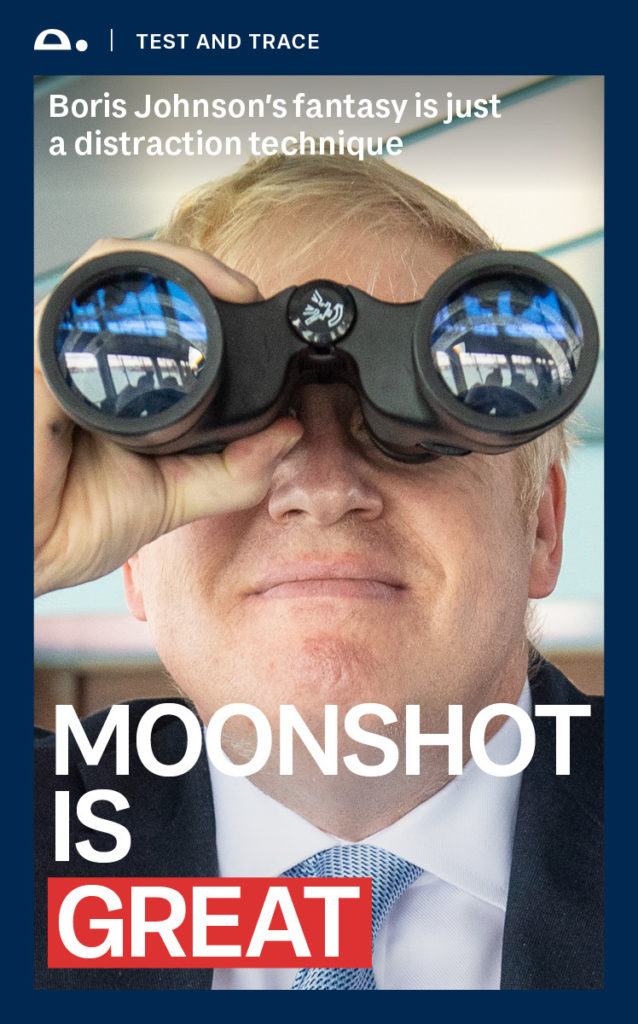 A shot in the dark

A shot in the dark

The prime minister is reaching for the stars, but the test and trace scheme is still in the gutter