I couldn’t see my family for the first fifty days. There was no explanation [when I was arrested]. The explanation started practically with the interrogation. [When you arrive] they don’t explain anything to the prisoner. They ask you to strip, and to put on pyjamas. They take everything you have, including ring, eyeglasses, everything. They give you one set of pyjamas and they ask a jailer to take you to your cell. There, actually, it was very difficult.

For me, there was a lot of silence. You don’t hear [anything] except people who might be suffering or sick. They don’t let people shout or speak up except if they are calling the guards. If you want to go to the washroom you have to put [on] your blindfold. And I actually broke my head like that because I couldn’t see the ceiling.

I had some money on me and every week one of the jailers used to come in and say: “If you give me some money, I’m going to the grocery shop I can buy you a few things.” Not everything actually. So most of the time I would ask for Kleenex boxes because I could tear them down and write on the back, because they didn’t give me any paper and anything. My wife actually bought me some fruit, but again not in the first fifty days because I couldn’t see my wife or any other person. It’s only after the fiftieth day that I could meet her. In 125 days I met her only two times.

The cell where I was taken was practically a cell of 3m x 3m, no bed, two blankets – one blanket to sit on, one to sleep with. No window. There was 24 hours of light. The light never went off, at least in this cell where I was. The ceiling was quite high. It was repainted. The blindfold was not inside the cell, but as soon as you got out of the cell you were blindfolded so you could not see around you and you could not see the interrogators. You could not see [anyone] with the exception of one or two people who brought you food and other things. You couldn’t see the other [prisoners].

You cannot keep track of time in prison, with one exception. The only thing you could count were the prayers. In my cell there were cockroaches and ants, so I had to deal with them also.

This is the speciality of Section 209: you are completely cut [off] from the outside world including the other prisoners. They don’t let you know anything about what’s going out in the world, and they control everything. 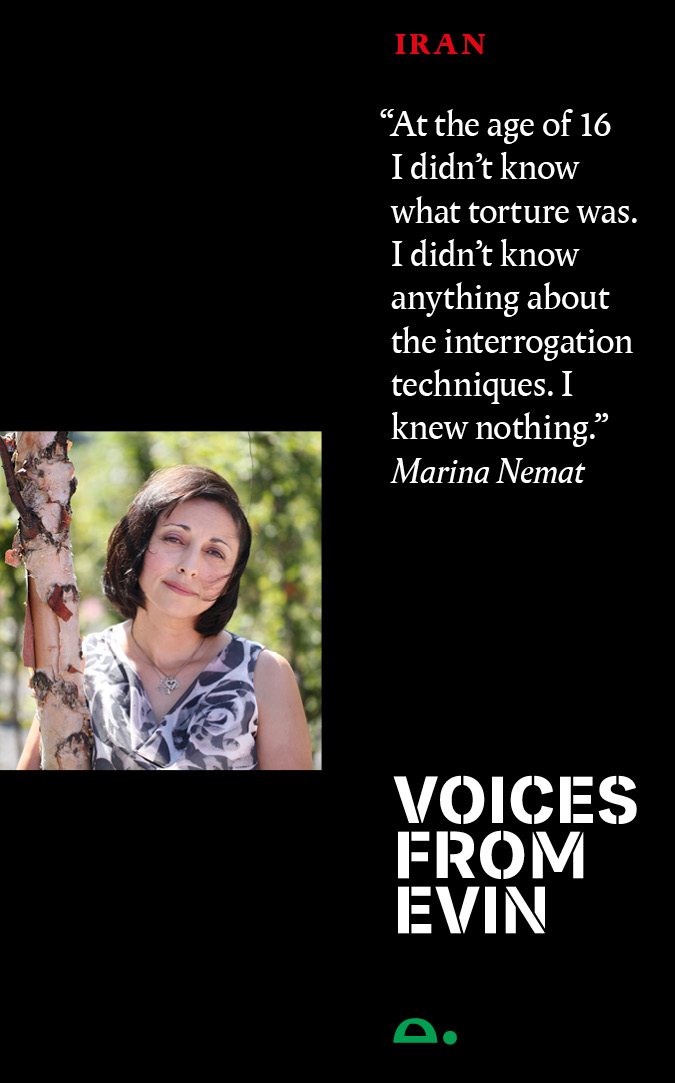 Nemat was arrested in 1982 after criticising the regime of Iran’s first Supreme Leader, Ayatollah Ruhollah Khomeini. She spent more than two years in Evin Prison, enduring torture and a forced marriage to her interrogator