It’s been 12 years since the UK last passed a major law on climate change. The 2008 Climate Change Act (CCA) set up the Committee on Climate Change, established national carbon budgets and created a policy infrastructure for further climate action in the future. It was welcomed by New Labour, but also by David Cameron’s Conservatives, who sensed a chance to shed their image as the nasty party. Only five MPs voted against it; all old-guard Tories who didn’t seem to get the memo.

Boris Johnson’s 2019 campaign team relegated climate change to a single page towards the end of its manifesto. And yet, in person, he has offered a utopian vision of Britain as the greenest country on earth.

So far Johnson’s government has over-promised and under-delivered on almost every front. Is there a chance he might reverse that once the worst of the pandemic is past, and turn the Treasury’s big guns on climate as he has on Covid? Harrison Brewer says: don’t rule it out. Giles Whittell, editor

Since then, ambitious climate policy has been all but absent. UK emissions fell in 2017 to levels last seen in 1890 as coal power plants closed to comply with the 2008 Act. But decarbonisation in transport and agriculture has been slow to non-existent, and even in the power sector it has stalled. Could that be about to change? Optimists see the Covid pandemic as a moment to wipe the slate clean and start afresh, but the signs aren’t good.

Last year the High Court approved construction of the largest gas power station in Europe, at Drax. Ministers were told the plant would undermine the government’s commitment to cut greenhouse gases, but objections were ignored. Despite this there are Conservatives who believe they can still deliver a green transition. I spoke to two of them, Sam Hall and Patrick Hall, both energy analysts at the Bright Blue think tank; both convinced that Johnson’s government can be a climate leader.

They point to the Conservative Environment Network (CEN)’s manifesto, published in 2019, which makes a case for the UK as “the Saudi Arabia of wind power” through massive renewable energy infrastructure investments that can offer employment to those made redundant by the pandemic.

They say a forward-thinking Tory government could build a robust, green, pro-market economy powered by renewables and supported by public and private investment, aligning green with growth.

Labour would point to the Tories’ main 2019 manifesto as opposed to the one produced by CEN. The former dealt with climate change almost in passing. Labour and the LibDems both promised versions of a green new deal in which emissions cuts would underpin the whole gamut of economic policy.

Climate as pagination in the 2019 manifestos

And there’s another problem for the Tories. They’re willing to talk about net zero by 2050, which after all is more than a generation off. But 2030 is simply “not feasible”, Patrick Hall says. It would involve massive government intervention and large economic costs, neither of which a Conservative government wants.

Does that make them impossible? This is where Covid comes in. The pandemic created the conditions for the Treasury’s largest economic care package since World War Two, with borrowing this year expected to be the highest since then at 15.2 per cent of GDP. As the climate emergency peers out from behind the virus, we should be reminded of an old Chinese proverb: “The best time to plant a tree was 20 years ago. The second-best time is now”.

Reaching net zero by 2030 would require a herculean effort of government coordination. The state’s many limbs would need to work collectively to cut emissions as if on a war footing.

Departments have at least begun to agree on the problem. The Treasury has undertaken its first net-zero review, due to be published in November 2020. The Department for Transport has outlined proposals in its Road to Zero strategy, earmarking £400m for a charging infrastructure investment fund, offering grants to incentivise electric vehicle sales and committing to transitioning 100 per cent of central government’s car fleet to electric.

These are small undertakings by the standards of other nations seeking to set the pace on the road to net zero, but at least there is a case for optimism. We know that Conservative governments aren’t afraid of spending in crisis, that different bodies are beginning to align their stances on climate change, and that there are MPs within the party that are clamouring for a greener world after the pandemic is over. If the stars aligned, it is not impossible that a Conservative government could aspire to lead the charge on climate. But the converse is true too. If the stars don’t align and the Tories don’t lead, future generations may find it hard to forgive. 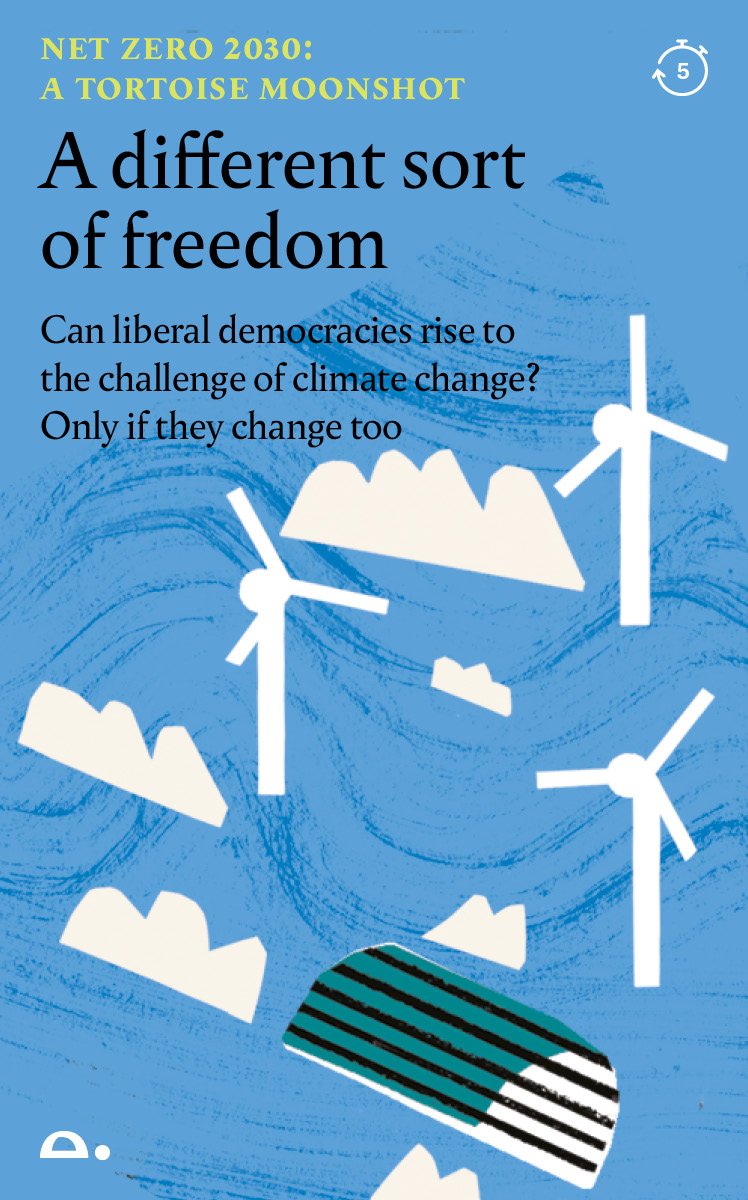 A different sort of freedom

A different sort of freedom

Can liberal democracies rise to the challenge of climate change? Only if they change too