As of February 2020, 282 local authorities across the UK had made similar declarations, starting with Bristol City Council in 2018. That’s more than eight in ten of Britain’s local authorities, taking a stand on climate change and thereby prompting the question: what can local government do about it?

In April 2019, Extinction Rebellion was so successful in forcing climate change onto the UK’s national agenda that supporters and critics alike were quickly asking what it would do for a second act.

XR hasn’t answered that question yet, but up and down the country town councils have been grappling with how to harness popular demands for radical action. A few have come up with an answer that’s less glamorous than bringing central London to a standstill but could be more effective – the citizens’ assembly. Megan Kenyon finds out that you don’t have to be elected to have a mandate. Giles Whittell, editor

For Kendal, gateway to the English Lakes, a key part of developing a tangible climate strategy has been to create a citizens’ jury – 20 people invited at random to listen to experts and eventually recommend policies to the council. The recommendations won’t be binding, but that’s not the point.

“My feeling and that of others was, at a town council level, we don’t actually have a large carbon footprint, so we’re much better to do something which engages the population in the issue,” says Chris Rowley, the council’s only Green Party representative. That may sound vague, but the idea is to use public engagement as a lever; “to put pressure upon the other levels of council […] with the backing of a jury that has been selected to represent the full range of the population”.

There are signs that this can work. Kendal’s jury is the first in the UK to hold regular meetings but other local authorities have launched their own deliberative processes, starting with Camden Borough Council’s citizens assembly in July 2019 and Leeds City Council’s citizens jury two months later. Each recommended accelerated decarbonisation of transport and housing, improved cycle lanes and retrofitted houses to make them more energy efficient. But they also showed the need for bespoke local action. For example, the Leeds jury was overwhelmingly for halting the expansion of Leeds Bradford Airport.

Deliberative democracy has also made its debut on the national level. Almost in sync, both France and the UK have held climate focused citizens’ assemblies. Claire Mellier-Wilson, an observer of both processes, says their role depends on their mandate. In the case of the French ‘Convention Citoyenne pour le Climat’, that mandate has come directly from President Macron, who’s promised to translate proposals into policy. Published in mid-July, the convention’s 149 recommendations include criminalising ecocide and making it compulsory to recycle plastic by 2023.

The UK equivalent – Climate Assembly UK – received its mandate from six select committees rather than government. Due to be released in September, its recommendations will be used “to inform [the committees’] scrutiny of government”, says Sarah Allen, Head of Engagement at Involve, the charity overseeing the assembly. In a similar vein to Kendal’s citizens’ jury, the proposals put forward by Climate Assembly UK will be used to put pressure on higher levels of government rather than directly enacting change. But national proposals run the risk of being too generic in a local context.

“It’s increasingly clear that for rapid and ambitious decarbonisation plans, there needs to be a locally distinct vision,” says Jess Britton, a research fellow on the University of Exeter’s IGov project. The trouble is, she adds, local government in the UK has little authority or financial muscle in this department.

Austerity has meant big funding cuts for local authorities, and most now have to apply for central government grants to pay for sustainability strategies. The process is hugely time consuming, according to David Hutton of Bevan Brittan, a law firm – and time is short. “It’s no good to just keep doing experiments for the next ten years and still not to have delivered this stuff at scale,” says Britton. “We need to be moving on delivering heat decarbonisation at scale.” (Heat decarbonisation is a huge priority given that domestic gas boilers currently account for nearly a third of all UK emissions.)

To improve local government’s capacity for medium-term planning on decarbonisation, Britton proposes five-year devolved carbon budgets for each region or authority, mirroring the 5-year carbon budgets which are required of the central government as part of the Climate Change Act. While the Act forces the government to keep account of overall carbon reduction, there is no detail on where local authorities fit in. As Britton argues, devolved carbon budgets would force policymakers “to face up to the fact that some localities are going to find decarbonisation more difficult, some have got more potential [and some] might benefit more from the economic opportunities of decarbonisation “.

Back in the Lakes, one of those opportunities is a better experience for tourists. In her book Too Hot to Handle? The democratic challenge of climate change, Professor Rebecca Willis discusses a collaboration with the Lake District National Park Authority in which she drew up a carbon budget for the region. “We set ourselves the challenge of measuring greenhouse gas emissions from the whole local area and reducing them in line with national targets,” she writes. To meet those targets, “bus services were improved, boat buses were introduced on the lakes, cycle paths were built [and] visitors were even told, explicitly, to ‘drive less, see more’”. Car use was cut by 14 per cent and an estimated 42,000 tonnes of CO2 were saved.

The choices required for decarbonisation are complex and for many areas throw up difficult trade-offs. “Most of these are not things which are done to people,” Britton says. “They’re choices around how we’re going to move around in our area, the sort of homes we’re going to live in, the purchasing decisions we’re going to make. So unless you can engage a local community, I think a lot of the things a local area might actually want to deliver are going to be virtually impossible.” 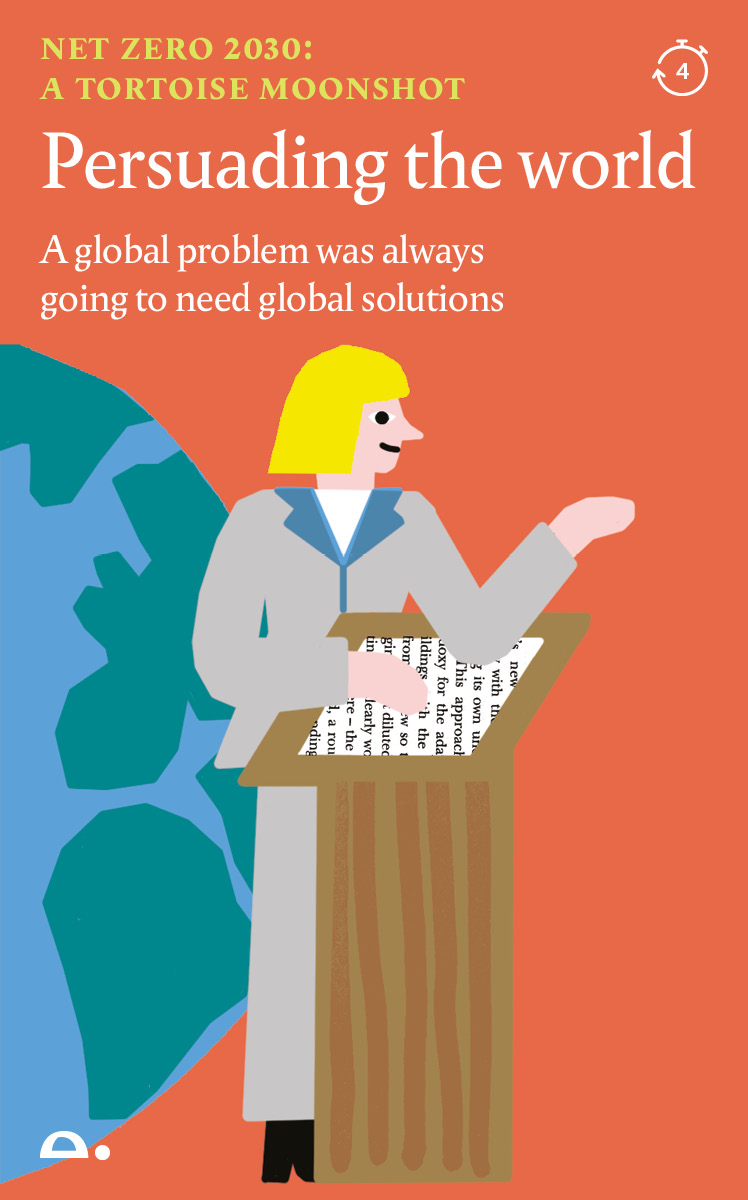 A global problem was always going to need global solutions