Alice – remember her? – is taking the bus to work today. It pulls away with a faint whine of the fuel cell compressor, leaving only water vapour in the air. The roads are quieter now. Many of the local families don’t have their own cars any more, preferring to use buses and their ebikes. It’s hard not to take the fresh, clean air for granted.

The journey to Alice’s wonderland has already begun. It’s set to accelerate rapidly over the next decade as governments coalesce around the need to reach net zero – but as things stand that won’t be fast enough. The UK’s current target of net zero by 2050 is nowhere near ambitious enough to keep global warming under 1.5 degrees.

Transport is one of the hardest sectors of the economy to decarbonise, and one of the biggest contributors to climate change. Responsible for a third of the UK’s carbon emissions, it’s a constant reminder that we’re still addicted to fossil fuels. This has to change – and probably will.

“The 2020s will be the decade when decarbonisation really begins to affect the public’s daily life,” Mark Naysmith of the infrastructure consultancy WSP has written. The question is how. How close is it possible to get to net zero in transport by 2030, and what would it take?

The big obstacle to a ten-year transition to green transport isn’t technology. It’s “fleet turnover”. Cars, vans and heavy goods vehicles (HGVs) have a lifespan of 18 years on average. So even if you flicked a switch and all new cars sold were electric from tomorrow, the UK would still have carbon-emitting vehicles on the road in 2040. With nearly 39 million of them on the road today, it’s simply not possible to replace them all by 2030 without paying people to trade them in – with all the associated emissions of scrappage schemes and manufacturing a new greener fleet.

It could have been so different. Norway started incentivising electric cars 30 years ago when the science made clear that global warming was real and man-made. They started by scrapping a vehicle specific sales tax on EVs. In 2001, VAT was removed completely, with the result that it became cheaper in many cases to buy an electric car than a petrol one. The Norwegian government funded 100 per cent of the cost of charging infrastructure, providing rapid charging points spaced at least every 50km on main roads. At the local level, policies like access to bus lanes for EV drivers and road toll exemption added to the perks of electric driving. Forty per cent of new cars sold in Norway today are plug-in electric compared with 4 per cent in the UK last year, and Norway has revised its target to be even more ambitious: it’s aiming for 100 per cent of sales by 2025.

Policies like Norway’s need to be rapidly rolled out in the UK. Charging infrastructure needs to be massively expanded. Grids will need upgrading and the mental image we have of a car, as something you fill with petrol, needs to change. This will take intervention on a scale scarcely seen before. That in turn will take political will and some policies are already pushing in the right direction.

The UK is expected to align with an EU target for cars’ average CO2 emissions. The policy requires the average vehicle to emit less than the target, which starts at 95g/km of CO2 and falls over time. For every gram a manufacturer comes in above this number they will be fined €95 (£85), multiplied by the number of vehicles sold that year.

Is this kind of policy equal to the task? In its current form, the target shrinks by 15 per cent between now and 2025, and 37.5 by 2030. If the UK stays aligned with the EU, the average car sold will still be emitting 59g/km of CO2 – a far cry from the moonshot 100 per cent electric target.

Something more radical is needed, and it’s been done before. California’s Zero Emissions Vehicles Mandate sets hard targets for the number of EVs sold by each manufacturer and penalizes those that fail to meet them. California had its first ZEV mandate back in 1990, and its EV market share is now four times greater than the US average. A ZEV mandate would be needed to give the UK a chance of reaching the moonshot target.

Consumers meanwhile need support to choose a technology that’s currently more expensive than conventional cars. The government’s Plug-in-car grant, worth £3000 off the cost of an EV in the UK today, goes some way to levelling the playing field, but there is still a price gap between EVs and their petrol counterparts. Take the new Vauxhall Corsa. The petrol version starts at £15,925, while the electric one comes in at £26,990 including the grant. But the gap is closing fast, and the tax incentives and minimal running costs that EVs enjoy mean they’re already the cheaper option for some people (company car drivers with high mileage, for example). Thanks to falling battery costs, electric cars are expected to reach price parity with petrol ones in as few as two years.

Consumer habits around cars are changing, too. Car sales in the UK are falling at 3 per cent a year as people move away from individual ownership. Many city dwellers in the UK today are finding it can be more cost-effective to rent cars when they’re needed instead. Services like Getaround and Zipcar are booming; Zipcar’s user base grew by a third to 250,000 in 2018. A study by Energy Innovation estimated that transport demand management initiatives like car sharing could deliver emissions reductions of 13 per cent by 2050 in the US.

And there is another reason to be optimistic: the strength of electric vehicle technology. “We’re in a privileged position with transport, because we have a product that is simply better than the competition,” says James McKemey of Pod Point, a charging infrastructure firm. Talk to any EV driver and they’ll rhapsodise about instant torque, one-pedal driving and regenerative braking. Servicing and maintenance should also cost far less than for an ICE car: there aren’t many moving parts in an electric car.

Trucks may need different technology altogether. It would require enormous batteries to power a battery-electric lorry from London to Liverpool. The Tesla Semi, Elon Musk’s flagship electric HGV, needs 1MWh of electricity to charge the battery to full – about a third of the annual electricity usage of a UK home. But all that energy needs to be pumped into the truck in the time it takes a driver to take a break, and that consumes about the same amount of power as 1,000 homes would in the same time.

“It’s all a little bit theoretical at the moment,” McKemey says.

Other options for road freight besides batteries are hydrogen fuel cells and catenary systems with an electrified rail for trucks to hook up to. The Energy Systems Catapult has concluded meekly that “further investigation” is needed into HGV powertrains.

For Alice, flying has become a luxury. Business flights have been all but wiped out by higher costs and video-conferencing. She took some great holidays last year, but it was also the first she can remember when she didn’t take a single flight.

Flights and shipping account for most of the remaining 30 per cent of transport emissions after road transport (aviation is around 22 per cent and shipping 8). Decarbonising these is even tougher than dealing with cars and lorries, because the technological solutions are much less well developed.

Science fiction has an obsession with futuristic aircraft, but in reality we’re stuck with jets. The Israeli company Eviation debuted an electric 9-seater plane (called Alice, as it happens) at last year’s Paris air show, but scaling it up to the size of commercial planes is unlikely to happen soon. “Batteries don’t store enough energy for electric planes to have a role to play [even] in a 2050 timeline,” says Greg Archer of Transport and Environment, a think tank. Hybrid flight took a setback in April this year, when Airbus and Rolls Royce’s flagship project was quietly scrapped.

In the shorter term, the easiest way to make air travel more sustainable is to keep the engine design the same but make the fuels greener, using either biofuels or synthetic fuels. Biofuels are available today, but there are challenges scaling up: farming for fuel leaves less land for crops and livestock. On an ever-more crowded planet, we’d quickly be facing a choice between having enough food and having enough fuel. Synthetic fuels, or synfuels, may have more promise. These follow a similar principle to biofuels, but instead of using the carbon captured by plants they use carbon dioxide captured from the air or from industrial processes and turn it into fuel using chemical reactions. But synfuels take large quantities of renewable energy to produce. In fact, to produce enough of them for air travel in Europe, you’d need about a quarter of the continent’s total current electricity generation.

Decarbonising shipping could be even harder. Hydrogen or even ammonia-powered ships have been suggested as a way to get to net zero, but as with aviation, replacing powertrains won’t be enough. We simply need to do less of it. And yes, that will mean eating fewer avocados from Peru.

The UK alone can’t decarbonise all its shipping by 2030, but recognising our contribution to these emissions is a first step.

Cruising home from work, Alice hears a synthetic “bong” go off, once, and then again a moment later, as the sat-nav alerts her to the charging points she’s passing by. It used to be a useful feature, but she turns it off now – it feels like it goes off almost constantly now. Almost every lamppost, street corner and garage seems to have a place to charge.

Getting to net zero by 2030 is a gargantuan task, and we’re falling far short of the ambition needed in policymaking. Coronavirus has shown what’s possible in times of emergency, but the fact is we aren’t as committed to solving the problem of climate change as we are to dealing with an immediate threat like Covid-19. Governments and people will need to go through a profound shift in mindset to view the climate crisis with the urgency it has always required.

EV charging infrastructure should be a priority, with discounts big enough to make EVs cheaper than petrol cars. Flying must become a luxury. We must transport fewer goods from overseas. In 1961, President Kennedy laid out a vision for the most ambitious transport project of all time – the Apollo programme. The 2030 zero carbon vision seems a long way off, but maybe, just maybe, out of the wreckage of 2020 could emerge a country willing to shoot for the moon to save us from climate disaster. Decarbonising transport would be a good way to start. 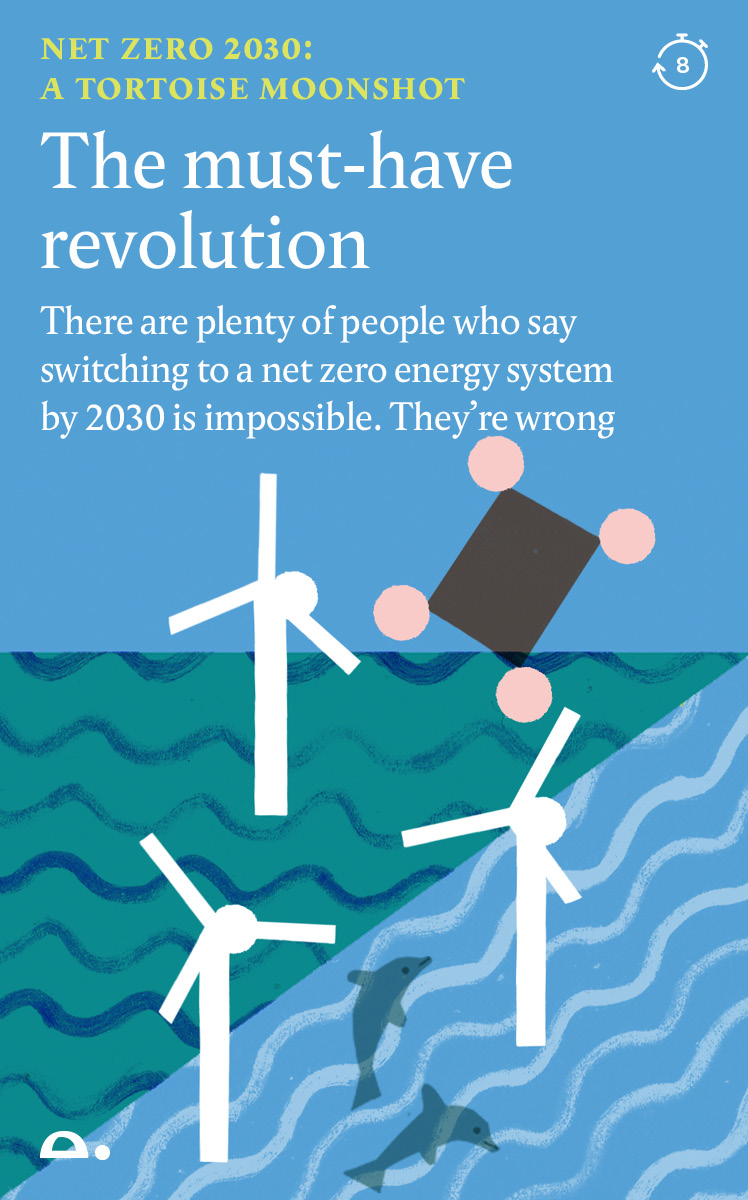 There are plenty of people who say switching to a net zero energy system by 2030 is impossible. They’re wrong