Silenced in China | Xi Jinping has reversed China’s course, setting his country back on a path to its more autocratic past.

Who is Chen Quanguo, architect of mass surveillance?

When Chen Quanguo is travelling, he sometimes asks his aides to stop the motorcade and place an emergency call to the police. Chen, a lean man sporting a sweep of jet-black hair typical for many Chinese senior cadres, then waits in his car and counts the seconds until a police squad arrives. If the reaction of the state authorities is too slow or does not meet his expectations, he holds local cadres responsible. “Arriving one second earlier increases the security of the masses by one bit,” Chen said during a recent visit to the city of Urumqi, when the police took 54 seconds to arrive.

The message behind these unannounced tests is clear. Chen, who oversaw the building of thousands of new incarceration camps and prisons in the regions of Xinjiang and Tibet in recent years, has zero tolerance for sloppiness. The 64-year old hardliner, currently Party Secretary of the oil-rich desert region of Xinjiang, has built his career as a ruthless law-and-order official. He is the enforcer of a new form of authoritarian rule that China has not seen since Mao Zedong.

State media praise Chen as the inventor of “convenience police stations”, a grid system with thousands of high-tech-enabled checkpoints. From the stations, which are often only 300 meters apart, police control everything from the apps on a person’s smartphone to the number of children born to a family or how often someone fills his gas tank. Since Chen took control over Xinjiang in 2016, more than a million Uighurs and other Muslim minorities have been sent to re-education camps where many endure forced labour. According to a report by the US Congress Chen is the architect of the “largest mass incarceration of a minority population in the world”.

Chen, who spent most of his career away from Beijing’s spotlight in backwater provinces and whose name is hardly known outside China, is a rising star in today’s increasingly nationalistic and authoritarian China. In 2017 Xi Jinping, who presents himself as China’s strongman, promoted Chen to the 25-member Politburo. It is expected that in the next two years Chen will rise to the narrower and more powerful Standing Committee. He will then be among the seven most powerful people in China. “Whatever he does, he does with extreme and unprecedented speed, urgency, resources and scope,” says Adrian Zenz, a leading Xinjiang-expert and senior fellow at the Victims of Communism Memorial Foundation in Washington.

Even allowing for the fact that top-level cadres in China are generally careful about their public image – official CVs and news reports are sanitised according to the party’s interests – surprisingly few details are known about Chen Quanguo’s four decade-long rise to power. In official speeches and public appearances he always follows the party line without ever going off-script or showing any kind of personality.

Unlike the so-called “princelings” among China’s leaders, who come from prominent communist families and inherited their influence and power, Chen was born in 1955 to a poor working-class family in central Henan province. In 1977 he was in the first generation of young Chinese after the Cultural Revolution to take the college entrance exam. After graduation, some years in the military and a stint at a car factory, Chen became at the age of 33 the youngest county party chief in Henan. From there he slowly and steadily climbed the ranks of the party ladder, but he never really stood out. By 1998 he was Vice-Governor of Henan province and, after some leadership positions on provincial level, in 2010 he became Governor of Hebei, the province surrounding Beijing.

Former colleagues and subordinates describe Chen as a workaholic and a “harsh and demanding boss”, the South China Morning Post has reported. Records show that he took part in the persecution of the Falun Gong-cult in Henan in the late 1990s, but little is known about his private life. His wife apparently worked at a provincial banking regulator and his daughter reportedly spend some time at school in Britain, although it’s not known where.

Only when Chen became Party Secretary of Tibet in 2011 did his true value to Xi begin to show. Chen introduced a novel grid-style policing system to the Himalayan region, which had been rocked by sporadic unrest and a distressing and destabilising pattern of self-immolation by dissident Buddhist monks. In Lhasa and other Tibetan cities hundreds of new “convenience police stations” were installed to spy on and control the local population. Tibetans had their passports confiscated. Schools were ordered to teach in the Chinese language and studies of Tibetan culture were strictly limited. Those, who did not conform had to undergo re-education classes or were jailed. Tibet became the “world’s largest prison”, says the exiled Tibetan filmmaker Dhondup Wangchen.

After he had proven himself in Tibet, Xi sent Chen to Xinjiang. The vast, thinly populated region has for Beijing enormous strategic importance – not only because of its resources but also as a centrepiece of Xi Jinping’s global Belt and Road Initiative; it connects China via former Soviet Central Asia to the Caucasus and Eastern Europe. But Uighurs and other Muslim minorities had been increasingly resentful of China’s rule.

As in Tibet, Chen stopped China’s decades-long policy of ethnic unity and replaced it with a police state and systematic repression. Within four months, more than 4,900 convenience police stations were built. Tens of thousands of new police were hired and hundreds of thousands of surveillance cameras installed. In 2017, police and security spending doubled with some counties spending more than 10 percent of their budget on security.

The result is a new form of technology-driven authoritarian rule in Xinjiang that far exceeds the surveillance and control used in other parts of China. Every aspect of daily life, from private Internet usage to the daily commute to work, is digitally monitored. Cars in Xinjiang have to install GPS sensors so the authorities can always control their movement. Surveillance cameras, many equipped with face-recognition technology, monitor even the smallest streets and villages and are sometimes even installed inside private houses. To fill up at a petrol station, drivers have to register themselves with a face scan. The data collected, along with the information about emails and communication, shopping behaviour and health documents, are constantly analysed by artificial intelligence and put into automatic reports to the police. While I was researching undercover in Xinjiang in 2018, local people told me about family members being sent to re-education camps for using WhatsApp, for regular praying and even for buying too much petrol. China denies the accusations and calls the camps job training centres. But internal Chinese government documents leaked last year describe in detail Beijing’s oppression policy in Xinjiang. In closed-door meetings Xi Jinping has personally ordered that the crackdown against Muslims use “the organs of dictatorship” and show “absolutely no mercy”. Chen has ordered officials to “round up everyone who should be rounded up”.

Only recently has international criticism of China’s harsh oppression in Xinjiang led to any sort of concrete action. Earlier this month, the US government-imposed sanctions against Chen Quanguo and three other senior Chinese officials for human rights violations, freezing their assets and denying the officials and their families entry to the United States.

But China knows these sanctions are largely symbolic. While the world is occupied with the coronavirus, authorities in Xinjiang are if anything intensifying the crackdown. Recent reports cite evidence that China is using systematic sterilization of women and forced abortions to limit the Muslim population. Local authorities are continuing to send thousands of Uyghurs and ethnic Kazakh to remote factories where they have to live and work in prison-like facilities. Their children often end up in state orphanages, where they are indoctrinated to abandon their culture and belief.

Beijing’s leaders are already thinking on a larger scale. “Xinjiang is a test laboratory for China’s digital surveillance state,” says Zenz, the Xinjiang expert. State media cheer Chen’s blanket system of surveillance cameras and the use of artificial intelligence to monitor the population as a model for the whole country. Police delegations from other provinces travel to Urumqi to study the grid policing system. Surveillance technologies first used in Xinjiang already have been introduced in other parts of China. Chen Quanguo is the architect of China’s authoritarian future, and he is getting more powerful. 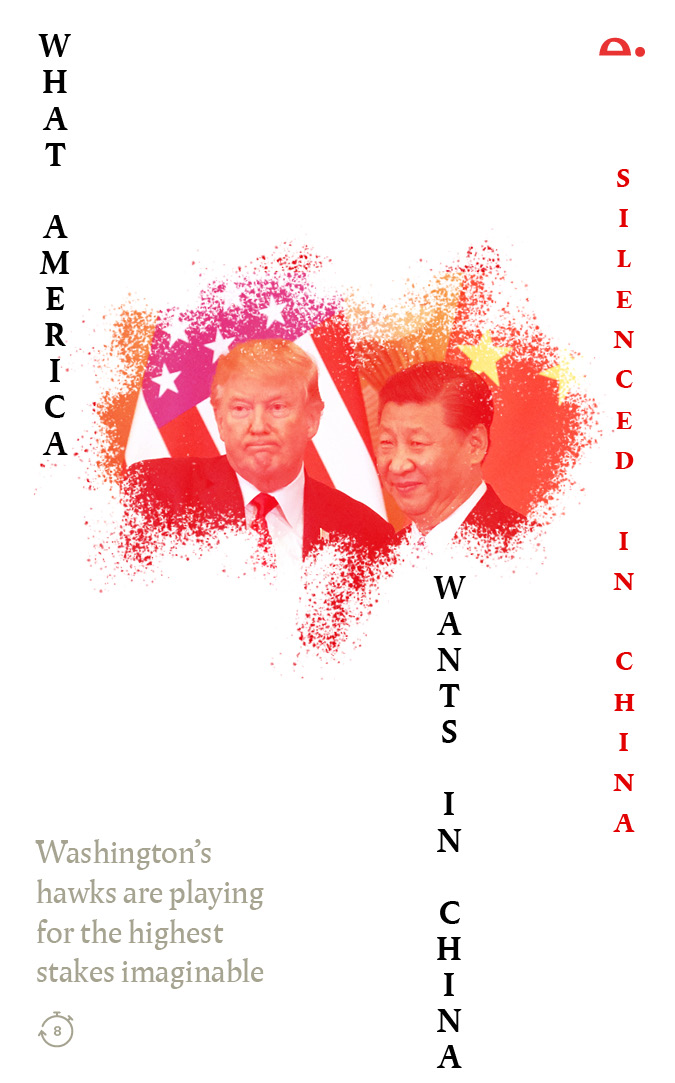 Washington’s hawks are playing for the highest stakes imaginable