Universities in crisis | Years after the graduation ceremony, what really endures about the university experience is the memory of a communal life, away from home for the first time. But life on campus, like so much else, cannot return as it was.

Libraries shut, tutorials cancelled and freshers‚Äô week conducted via Zoom ‚Äì this is the new reality for hundreds of thousands of university students.

Can universities do enough to make campus safe for a new academic year and convince students they will be paying for something worth having?

In the first part of our examination of universities, we dug deep into the debts they are carrying, the income they have already lost from cancelled summer schools and a lost term, the dependence upon foreign students, the future of research. Today, we wanted to hear from students ‚Äì should the current cohort return, should the new ones start their university life, and what of those who missed out on graduation?¬ÝDavid Taylor, editor

Higher education is about study and knowledge, but also so much more than that all-important diploma. Can the (expensive) university experience be worth it, if campus life loses its joy and its power to connect?

We wanted to know what students are thinking about the prospect of a new term in the aftermath of lockdown.

Noah Gerson, 19, about to enter his first year at London School of Economics

Can you truly call yourself a fresher if you do not spend your first week at university hideously hungover, having stayed up until the early hours holding deep, meaningful conversations with new best friends who you might not be talking to come November?

That is the question facing several hundred thousand undergraduate students as they enter university life in the age of Covid-19.

‚ÄúIt sucks. Freshers‚Äô week is the starting point of university, when you familiarise yourself with the surroundings. This won‚Äôt happen now,‚Äù says Noah Gershon, who takes up his place at LSE in September.

‚ÄúIt‚Äôs an important way to mingle, especially at such a large and diverse university. I‚Äôm living at home which is tricky ‚Äì I do feel like I‚Äôm missing out, and the impact this will have on my social life.‚Äù

Like many, Noah considered deferring. The coronavirus had already cut short his gap year. ‚ÄúI was meant to go travelling for five months but was only able to do two. I did the saving and the working, but then had to cut short my travels.‚Äù

He is worried he will miss out on the traditional university life. ‚ÄúIt‚Äôs very frustrating that valuable time is being lost ‚Äì learning, studying, getting the whole university experience.‚Äù

Studying cybersecurity and advanced networking gives Alex one advantage over some of his contemporaries ‚Äì all of his lecturers are at least technologically-aware.

But he can‚Äôt get the practical experience so crucial for his course. ‚ÄúWe‚Äôre not getting access to hardware like robots, servers and virtual reality technology. We have leading edge technology ‚Äì it‚Äôs fantastic ‚Äì but you can‚Äôt learn on them unless you‚Äôre there with them.‚Äù

Group assignments conducted from a distance have understandably proved tricky. ‚ÄúWe have access to online resources but there‚Äôs no real alternative to sitting around a table face-to-face.‚Äù

The sudden imposition of lockdown has also made for a difficult adjustment. ‚ÄúSocially, it‚Äôs been quite a shock to the system. It ramped up so quickly ‚Äì from avoiding public spaces to full lockdown, so I didn‚Äôt have the chance to say goodbye to some of my friends in the third year.‚Äù

Alex has moved back home, and being away from campus has led to some unusual working hours. ‚ÄúI can work at home but now that I‚Äôm not going into uni at 9am heading back at 4pm, I find myself working at odd times. Now I‚Äôm up at 1 or 2am tying up odd bits.‚Äù

Maya, studying French and Arabic, is now back at home in Coventry with her family. She is set to finish her second year, but like so many faces huge uncertainty about her future plans. Maya had been accepted on a British Council placement for her year abroad, but this now hangs in the balance.

‚ÄúI‚Äôm due to move to France as a language assistant in a school next year and I‚Äôm worried about it being cancelled. And I can‚Äôt really organise anything else at the moment.‚Äù

Brexit further complicates matters, because the EU‚Äôs funding for young people to train, study and work abroad may no longer apply. ‚ÄúWe might be the last year to get Erasmus funding and if it doesn‚Äôt go ahead I don‚Äôt know if I‚Äôd be able to do it without the funding.‚Äù

If her year abroad falls through, Maya says she‚Äôll have to reassess her studies. ‚ÄúI‚Äôll probably take a leave of absence and do my own thing. I‚Äôm paying tuition fees, have the debt, but not the same experience. I‚Äôd rather wait a year, save up some money, and do uni properly a year later.‚Äù

Ryan Thorne, 21, due to graduate next month with a degree in Geography and Management

The coronavirus means that Ryan Thorne is missing out on a big moment, both for him and his family ‚Äì graduation.

‚ÄúYou spend a lot of your time at university dreaming about graduation. My twin brother and I are the first in my family to go to university. Graduation was supposed to be a moment for my family. I wanted them to experience it with me.‚Äù

Ryan will have his degree at St Andrews classified in June, and is on track for a 2:1. He has received a scholarship to study at Emory University in Georgia, USA, but this is now under threat. ‚ÄúI‚Äôm worried it might be cancelled,‚Äù he said.

In the midst of all this uncertainty, Ryan is also having to deal with spending a lot of time alone, still in St Andrews. Having grown up with six siblings, this has been immensely difficult.

‚ÄúI‚Äôm not used to being in a room by myself, let alone a flat by myself. It‚Äôs been challenging spending this much time alone.‚Äù

Understandably, this has had an impact on his studies. ‚ÄúIt‚Äôs hit my ability to stay focussed, stay motivated. I had to spend my late grandad and sister‚Äôs birthdays by myself and far from my family. It‚Äôs hard then to write a dissertation.‚Äù

Rishika Singh, 19, was completing her first year in London at the School of Oriental and African Studies

On 14 February, Rishika got a call from her parents: they‚Äôd bought her a plane ticket, and she was booked on a flight home the next day. This followed speculation that the Indian government would shortly close its borders, even to Indian citizens.

‚ÄúIt was a nightmare. I was all frantic, arranging cardboard boxes, finding friends and storage facilities.‚Äù

Back home in Uttar Pradesh, Rishika misses lots of things about London.

‚ÄúI miss the people more than anything. I enjoy discussion and debate, and SOAS is such a lively campus. London is such a diverse city. I‚Äôm even missing crowded tube stations. Missing the good part of London weather after living through the winter.‚Äù

Being away produces logistical challenges for international students like Rishika. ‚ÄúThe time difference makes it difficult. I have to email at early times. Some tutorials don‚Äôt finish until 10.30pm India time.‚Äù

She would love to come back, but her return, like so much else, is pandemic-dependent.

‚ÄúIf online studies continue for longer than one semester, there‚Äôs a lot of expectation from my parents to transfer to an Indian university. They feel I shouldn‚Äôt be spending that amount of money for an online course.‚Äù

Janhvi Chandra, 18, is due to move from India to start studying at University College London

For many international students like Janhvi, moving to a foreign city is about experiencing a new culture and learning to live independently. She was excited to be starting her studies in London this autumn.

‚ÄúI was really looking forward to attending but it doesn‚Äôt seem probable now. I don‚Äôt know if I can even reach London in time for class.‚Äù

‚ÄúWhen you‚Äôre applying from abroad, the whole point of the experience is not sitting in a room or attending class, but getting the experience first hand from professors. Even if I manage to travel to London, and am put up in a UCL hall, I will be missing out on university life. In India we don‚Äôt live a very independent life. We have house staff, chauffeurs. But in London I would have to live independently, learn to cook, grow into a better person.‚Äù

Now, Janhvi is looking for alternatives in India. This is not without its challenges. ‚ÄúI hadn‚Äôt applied anywhere in India. Indian colleges have a different application system.‚Äù

Lots of deferrals lead to other issues. ‚ÄúA lot of students are looking to take gap years. But then next year will be even more competitive as more students apply for that cycle.‚Äù

The view from Tortoise student members

We asked our student members what is on their minds, and almost 200 replied. The biggest single concerns students have about returning to university is the lack of facilities they may face, like libraries‚Ä¶

But looking a little more long-term, a major concern is understandably around their employment prospects‚Ä¶

When asked if they would rather return for online-only courses in September or wait until spring 2021 and return in person, students were split‚Ä¶

Finally, nearly all students felt that if classes remain online-only, they should get a rebate on their tuition fees‚Ä¶ 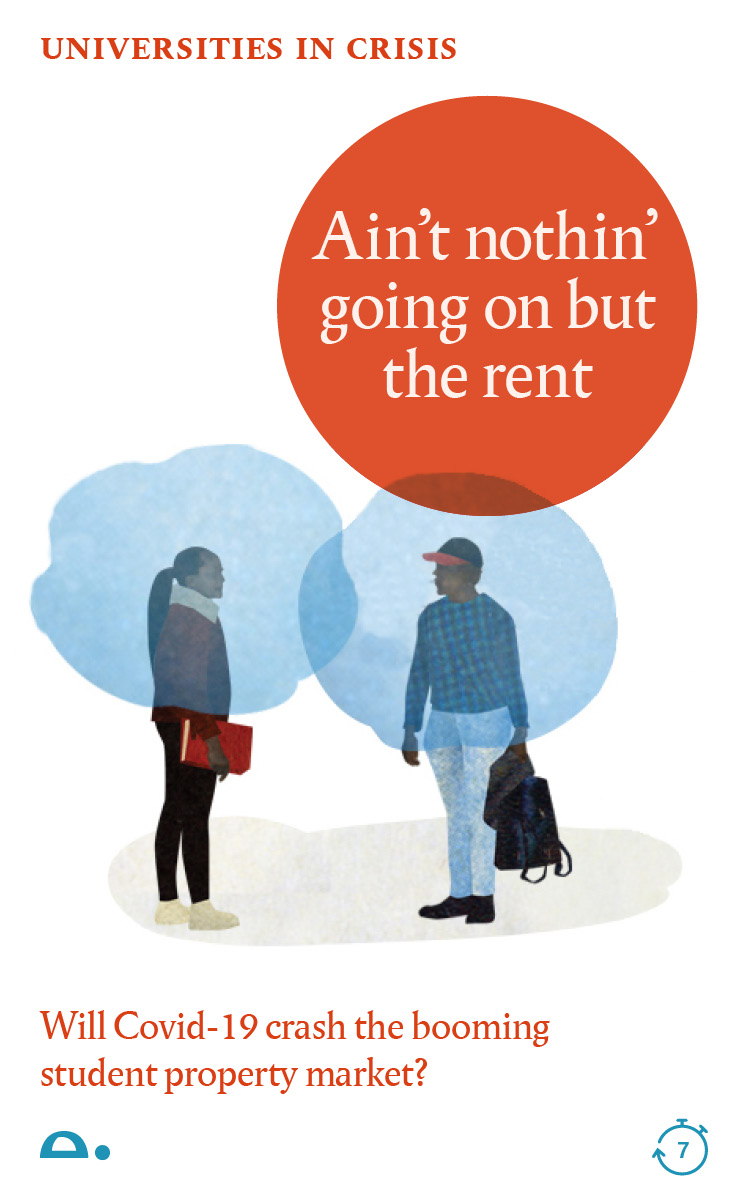