Could Covid-19 do for social care what World War II did for the NHS?

For the past two decades in Britain, successive governments have acknowledged the need for radical change in social care. From privatisation in the 1980s to the grand collapse of one of the biggest providers, Southern Cross, in 2011, to numerous abuse scandals, this is a sector beset by problems – now so starkly revealed by the coronavirus pandemic.

Social care provision has been hampered by chronic under-funding, while an unwieldy matrix of for-profit and nonprofit providers makes it fiercely complex to regulate. For families in need of care, the costs are often ruinous as the threshold for state-funded support is impossibly high. And expensive fees are not a guarantee of quality either, as high staff turnover across the sector affects the continuity of care.

This week, we have been investigating the state of the care sector. In Britain, we found an industry operating increasingly offshore and out of sight, delivering big payouts to executives but leaving frontline carers on the minimum wage – even in the midst of a pandemic, and after nearly 12,000 confirmed Covid-19 deaths in care homes. In Spain, where care home deaths have now passed 18,000, we reported on the legal battle now commencing between families and care homes as people begin to ask: who should be held accountable?

But there is another important question to be asked, particularly if we want to try to use the lessons of the pandemic to rebuild a better and more compassionate society. Might Covid-19 do for social care what World War II did for the NHS? And, if so, what would a service that was loved and valued look like?

Over the past decade of austerity measures, funding for local authorities – the bodies that commission care homes and pay for publicly-funded care – has fallen by an estimated 49.1% in real terms between 2010 and 2018. Spending by local authorities on adult social care was £700m lower in real terms in 2018 compared to 2010. They have balanced their books by cutting care quality- and how many people receive it, which dropped by a quarter between 2010 and 2013.

“The current system isn’t funded sufficiently to deliver care properly,” says Simon Bottery, head of social care policy at the King’s Fund, an independent health think tank. As demand rises, to merely maintain the system at 2015/16 levels will require an increase in spending of £12bn by 2030. To reform it will require an even bigger investment.

But where should that money come from? Political parties and think tanks have put forward various options for the state to part fund care or to foot the bill entirely, with more voices suggesting a move towards a “free at the point of use” system in recent years (including some right-leaning Conservatives). Most models for funding care acknowledge that the state will need to put more money in. Other options focus on individual contributions, for example, a pension-style auto-enrolment scheme where a portion of workers’ wages is paid into a ‘pot’ of money reserved for future care costs.

But the fairest options for funding care involve ‘risk pooling’ – sharing the risk and the cost of social care across society. “Risk pooling is the only way of making sure there is enough money for people if they need care in later life. That’s either an NHS type tax-based model or it’s social insurance like they have in other parts of Europe where it’s a compulsory contribution,” says Bottery.

Natasha Curry, deputy director of policy at the Nuffield Trust, agrees. “We need risk pooling. Social care is the only public service where people are hit with catastrophic costs you can’t insure yourself against.” According to estimates by the Dilnot Commission, set up in 2010 and run by economist Andrew Dilnot, 1 in 10 care users will pay care costs in excess of £100,000 over their lifetime.

For working age adults who need care, the financial pressures are even greater as advances in medicine have increased life expectancy for adults living with medical conditions and disabilities. The rising care needs of working age adults added costs of £243 million to local authorities in 2018, according to the Association of Directors of Adult Social Services. The number of over-65s has increased by about one-fifth since 2010.

Curry argues that funding for care should be like that of any other public service: “We need a system that people understand and that is relatively fair. In my mind that leads us to a system that is, at least in part, based on general taxation. That’s how we fund other services so why should this be any different? People understand it, they trust it.”

To stop tax-payer money from leaking out of the system and into offshore accounts, the government should make care providers based in tax-havens ineligible for state-funding.

Under the current system, the vast majority of people have to pay their own way. There are two main eligibility criteria for state-funded care: a needs test (is your condition life-limiting enough to warrant state-funded care) and a means test (do you have assets of less than £23,250). Many people who find themselves in need of adult social care do not meet either of these assessment criteria. “To get publicly funded social care, you’ve got to be a limbo dancer and pole vaulter,” says Bottery. You’ve got to be able to clear the high bar on needs, and to go under the low bar on costs.

The Dilnot Commission suggested that the means test for state-funded social care should be revised up from £23,250 to ensure that only people with assets above £100,000 are liable for the full costs of their care. The current threshold for the means test has not moved in line with inflation for the last decade.

The complexity of the care market makes it difficult to regulate. “It’s a huge, sprawling, complex collection of different providers,” says Natasha Curry of the Nuffield Trust “It’s just impossible at a national level to keep a view on understanding what’s going on in the market.”

The Care Quality Commission is also not dedicated to the sector. Whereas Scotland, Wales and Northern Ireland have regulatory bodies managing care homes alone, in England the CQC has a much broader remit, with responsibility for health services as well as social care. Such market specialisation might be beneficial, increasing the capacity of the regulator.

Devolution of oversight over care in cities and regions of the UK has been put forward as an option. In 2015, Greater Manchester announced plans to devolve its health and social care systems. While national regulators were to retain oversight, Greater Manchester would have its own regulatory body for assessing care services too. However the results of the devolution project have so far been mixed.

Including the voice and perspective of users and their families in assessments about the quality of care is another important suggestion. The CQC already has an initiative in place to include feedback and complaints from relatives and residents such as “Tell us about Your Care”, introduced in 2014. “We know relatives can play an important role in making sure good quality care is provided,” says Helen Wildbore of the Relatives and Residents Association, an organisation that represents the interests of care users.

Care in the community

Entering residential care can be disempowering; many people don’t want to do it. But there are few other options available. Local authority funding cuts have made business unprofitable for home and community care providers, forcing many close. Without these vital services, people may left to deteriorate to a level where they will have no choice but to go into a nursing home.

“Too often, we focus on models of support that disconnect people from their lives,” says Caroline Speirs, director of Think Local Act Personal, an organisation associated with the Department of Health and Social Care which advocates for community-based care that gives people greater independence. The care system at present emphasises “traditional and institutional” models of support, argues Speirs. “That’s not where life is lived.”

Community-led approaches have been successful elsewhere in Europe. The Netherlands has pioneered the Buurtzorg – or ‘neighbourhood care’ – model, where one nurse provides comprehensive home care services to their client and offers preventative health advice to them and their family. It aims to do away with the bureaucracy and impersonality, instead offering consistency and an ongoing relationship between the carer and client. The model is already being trialled in the UK by Cornerstone, a Scottish community care charity, and by Buurtzorg Britain and Ireland, with pilots in Suffolk, Kent, Cheshire, Aberdeen and several London boroughs.

Personal independence, participation in society, dignity, respect and agency in daily life were principles enshrined by the Care Act of 2014. But still the care system fails to deliver.

A system that responds to the needs of individuals is sorely needed, with models for care that offer flexibility and choice for care users and their families.

With cuts and austerity on one hand and profiteering by private companies on the other, social care providers have long been focussed on their bottom lines. To change the system for the better, we must remember that care, after all, is about people.

In his bestselling book Being Mortal, surgeon Atul Gawande explores why we have longevity over what makes life worth living. He asks why we treat the elderly like children, infantilising them, boldly exploring illness and death – and how poorly we treat it.

The need to reform social care has cross-party consensus in the UK, what they don’t agree on his how to do it, or how to fund it. Sarah Neville at the Financial Times charts how disagreements between parties led to our current state of inertia.

At the end of the war in 1945, the National Health Service was born. Andy Burnham, the mayor of Greater Manchester, is now calling for a National Care service.

The success of the Buurtzorg model of community-nursing in the Netherlands has set the social care policy world alight. In 2017, The Guardian interviewed the nurse who founded it.

Scotland’s free personal care system offers another idea for how social care could be reformed south of the border. The state covers the cost of at home help with eating, washing and dressing, but not for shopping and household cleaning. The hope is that by increasing the availability of care at home, fewer people will need to go in to care homes. This report by the FT took a looks at how well the system is working.

Other innovative ideas include inter-generational care facilities, where nurseries for children are incorporated in to residential homes for the elderly. The Atlantic visited a care home in Seattle that’s trying it. 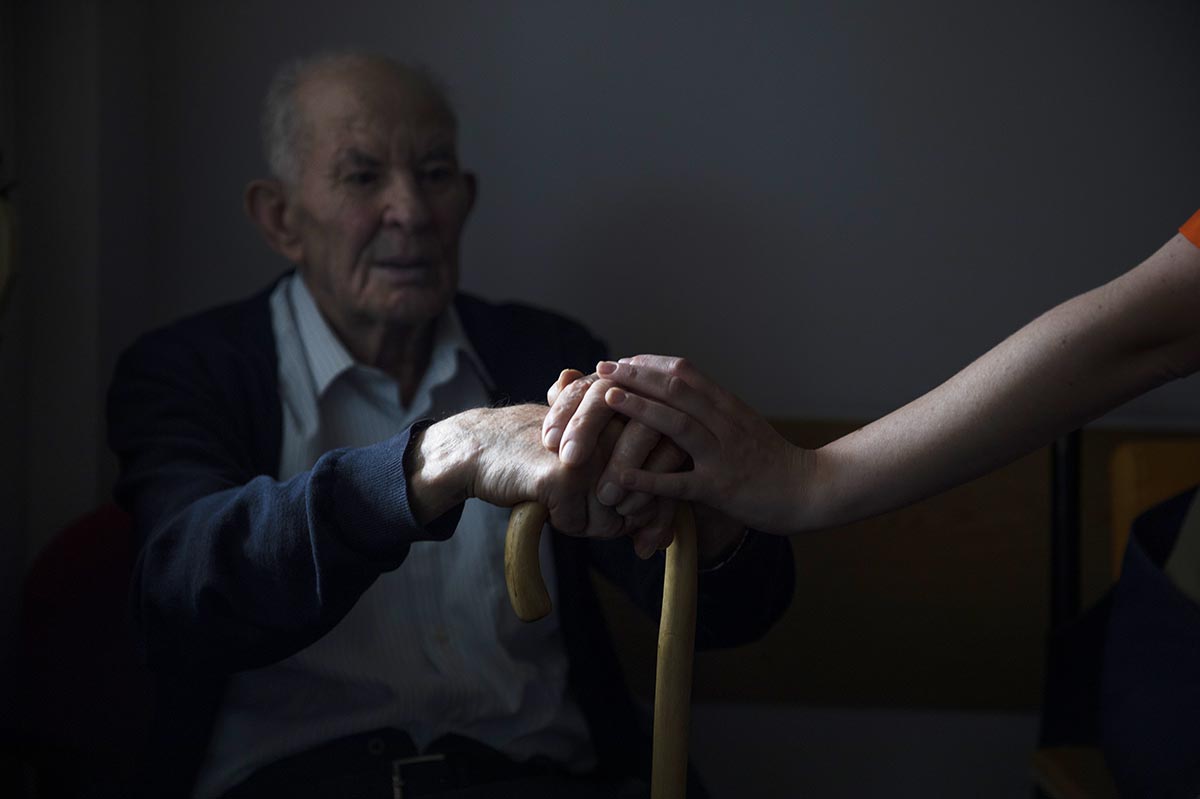 Cash and caring: the business of care homes

Cash and caring: the business of care homes

The tragedy of COVID-19 exposes deep problems in UK care homes: too little money at the front line, too much in tax havens