Coping with Covid-19 | Dystopian movies and books have – more than ever – given us a mirror to hold up to our own society. The shudder that generally accompanies a peek into an imagined near-future has felt even more pronounced during lockdown.

Twenty-eight days later? Try 28 weeks later. I don’t know if any of you had plans pencilled in for 5 October – birthday parties if you are Imran Khan or Kate Winslet – but I wouldn’t bet on them still being relevant. You see, it could go either way.

As scientists have repeatedly levelled with us; this new way of living doesn’t fully end until a proven vaccination has been found. Most estimates are around 18 months (78 weeks later…) for one to be developed successfully. A team at the University of Oxford, however, gives an estimate of September at the earliest. Whether that vaccine or the tens of others in development come off, in what would be an extremely rapid timeframe, will alter entirely the end of 2020.

Dystopian movies and books have – more than ever – given us a mirror to hold up to our own society. The shudder that generally accompanies a peek into an imagined near-future has felt even more pronounced during lockdown.

The Danny Boyle-directed movie 28 Days Later delivered haunting images of an empty London, which – minus zombies – have actually come to pass. The sequel, 28 Weeks Later, directed by Juan Carlos Fresnadillo, imagined what rebuilding a society would look like. In the movie, NATO forces had taken control of Britain and Canary Wharf was the centre of civilisation.

We have all lived through so much cultural change so quickly, it is hard to project forward more than a day or two. Where will we be by the end of the year – reverting to type, or changed utterly? Hannah Jane Parkinson has been scanning the horizon. David Taylor, editor

Come the autumn, then, will we still be in full lockdown? Or will we have been let out in stages? The young, unleashed like puppies bolting from an opened car door. Licking each other a lot, no doubt. Will some of us be walking around with the “immunity passports”, mooted by Matt Hancock? Certificates which seem both to make sense and be uncomfortably reminiscent of authoritarian states. Remember, the UK is a nation which rejected ID cards and has an intolerance for the types of surveillance measures that bolstered China and South Korea’s coronavirus response. If the youth are let out early, will this open up further generational tensions, after a sort of armistice in quarantine?

If lockdown has ended in October, will people without gardens come blinking back into the light with the pallor of Elizabeth I? Will those with gardens have transformed into horticultural masters via YouTube tutorials and plenty of practice, now looking to enter the 2021 Chelsea Flower Show. And will medals be awarded for Skills Learned During Lockdown?

There will be three new corona-inspired types of physique: those who bought home-gym equipment and weights before every online retailer sold out of them, emerging with triangular shaped upper bodies; those who ate chocolate for two thirds of meals (perfectly understandable) and didn’t give a toss; and those who were hit badly by Covid-19 and are still recuperating after the brutal ravaging of their insides.

Wait, four physiques: those who have been ill for reasons unrelated to coronavirus, whose treatment has been delayed for weeks and weeks, despite government assertions that the NHS has been “open for business as usual”. Because it isn’t, and it won’t have been.

What, in particular, of the bodies that used to entertain us? No, not those ones. Although, shout out to all my fellow single quarantiners; it’s been a while. I mean the feet that kick balls; the arms that throw javelins; the hands that grip rackets. In one of the most extreme examples of hero to zero, I went from cocky Liverpool FC fan just waiting, filing nails, for an inevitable league win, to staring down the barrel of a scrapped season.

It won’t be scrapped, for numerous reasons. I am confident it will be finished. But how will a socially-distanced open-top bus parade work? Will games be played behind closed doors? What if an unassailable lead dissolves in the face of such upheaval? And will the sports sections of newspapers have survived to the end of the year to tell the tale? Some news outlets, after pleading in vain for subscribers and purchases of print copies, or donations, will fold. And then afterwards, people will talk of what a great loss they are.

Will the news just consist of reporters asking the home secretary Priti Patel questions she can’t answer, via an internet connection dodgier than a man selling watches from the inside of a coat? Will our health system now be funded solely by people texting in to give fivers and 99-year-old army veterans walking around their gardens? Will a lapel badge have proved to be just as effective as PPE? More as we get it.

Maybe we enter a dystopia, in which Patel becomes prime minister, and plasters The Smirk across billboards nationwide. The smirk will follow us like the eyes of the Mona Lisa. No, but really: will Johnson still be PM in October? After thousands of deaths, even with the unprecedented nature of the virus factored in, how will the government’s strategy look? Has parliament become fully digital and, if so, will Rees-Mogg have to artfully position his laptop atop a pile of thick history books so that his rude, performative reclining is in shot?

Will Keir Starmer’s stockpile of sculpting gel have run out after issues with supply lines? By October, I fully expect the rats to have taken over the sulphuric detritus of the Houses of Parliament; a situation a mere whisker away before all of this. Stanley Johnson, father of the prime minister, will walk, uninvited, into every home in the land to assert his opinion on… literally anything. This whether or not the lockdown is lifted.

Buried grief and layered cakes of delayed celebration may finally be allowed an outlet. Quasi-funerals take place, real ceremonies having been denied to the thousands of dead. Goodbyes, not permitted for families of dying loved ones, including 13-year-olds, will be said in emotional gatherings.

Weddings will take place again; at least for couples that haven’t split up in the meantime. Divorce lawyers will crack their knuckles and lick their lips at the prospect of so much work (“until lockdown do us part”). Vice will have run at least three “I had sex with my step-sister during lockdown and here’s what happened” pieces.

NHS staff, traumatised from the frontline, will need a lot of therapy, and not just the banging of pans, as genuinely moving as that was (and I say that as a cynic). Hairdressers will account for 60 per cent of economic growth. We will have to readjust to the feel of denim on the skin. Some of us will organise fire-pits to burn all sweatpants; others will never wear anything but sweatpants again. Mobile phone signal and data connections continually drop out as the telecom towers, vandalised by conspiracy theorists, are slowly rebuilt. But we will, fingers crossed, be meeting face to face. Touch will be back in town (I cannot wait).

Emotions will remain a vortex. The ostensible great coronavirus equalling will be exposed as a lie, obvious to anyone who looked closely enough. Furloughed staff return to work. Those made unemployed emerge after months of hardship, choosing daily between food and fuel. Others, more fortunate, list the books they have read. Teenage boys talk of Don DeLillo and nothing else. Something called Animal Crossing is named Oxford Dictionary’s word of the year, even though it is two words. We let it slide. Perhaps, I hope, humanity triumphs over ideology. Perhaps immigrants, frontline workers, those in insecure jobs who have proved invaluable; who have fed us; looked after us; saved our lives; cared for us; kept our spirits up, will be given their due. Perhaps the escaped goats of Llandudno will lead the way.

After the courts reopen, the nation follows the legal appeal of Charles and Diana Ingram, whose story was at the heart of Quiz, the show we all binged early on in the New Era. Which seems so long ago. Twenty-eight weeks on we might – just might – be nearer to knowing the answers to many, many questions. 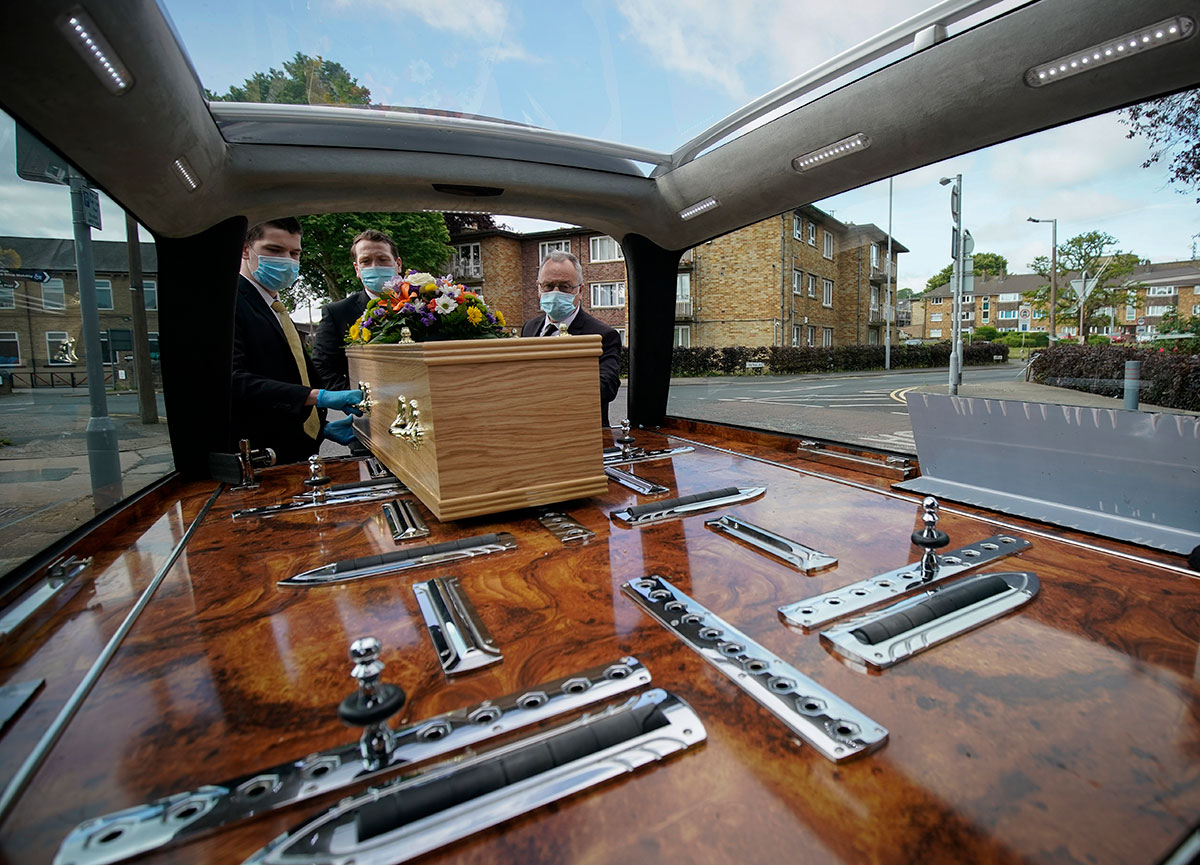 No weddings and 14 funerals

No weddings and 14 funerals

For a parish priest, joy is in short supply and tragedy is everywhere. But hope lives on