Alistair Barclay was a young boy when his father and uncle bought the island of Brecqhou in 1993, started building their mock gothic castle, and falling out with their neighbours on Sark, the island next door.

In the spring of 2019, the youngest of Sir David Barclay’s sons sent word that he wanted to meet Christopher Beaumont, the 23rd Seigneur of Sark, on the 80-acre granite rock which had been given to Beaumont’s predecessor by Elizabeth I – on the understanding he would guard it from the French.

For most of Alistair’s life, the Seigneur and his islanders have felt it needed guarding from the Barclays.

Alistair Barclay came bearing gifts: a silver inkwell set engraved to the Dame of Sark on her 25th wedding anniversary by the islanders. Alistair returned it to her great-grandson along with a hand-written note from his father, who had bought it when Christopher’s father sold many of the old house’s contents.

Beaumont, an amiable former army major who lived in the UK until his father’s death in 2016, shows me the sparkling set one dark January evening, while sitting in the Seigneurie, the grand manor house which comes with the job.

“It was such an incredible gesture,” he says. Earlier gestures from Sir David had been just as incredible, but possibly less generous.

The Barclays’ dealings with the inhabitants of Sark since buying the island next door in 1993 has been marked by fierce legal battles, complicated business dealings and seemingly inexplicable retribution when thwarted.

The Barclays had repeatedly called for the old Seigneur to be removed from office – both in private and in the pages of the Sark newsletter run by his former estate manager, Kevin Delaney.

The Barclays wanted the Seigneur out so badly that, in 2010, they offered Christopher’s father £2m in return for his feudal lease and title. Despite a democratically elected parliament by then, this title still allows the Seigneur to veto legislation and appoint the island’s judge (as well as other rights such as owning doves – and the only unspayed bitch on the island). He declined.

When the 22nd Seigneur died in July 2016, Sir David is rumoured to have asked to buy the rights again, but no one, least of all the current Seigneur, a man who wants to be on better terms with his billionaire neighbours, will confirm this.

The Barclays’ long-running battles with their neighbours on Sark seem inexplicable to residents. Having bought their own granite rock on Brecqhou and built a palace on it, why spend decades at war with the locals across a narrow strip of water?

With its own laws and parliament for its now 450-strong population, the Royal fief of Sark is difficult to get your head around in some ways. Its system of governance and way of life had remained largely unchanged since the first Seigneur arrived with 40 armed men in the 16th Century. Islanders still travel on foot, bike or cart as cars are banned.

It is beloved of holidaymakers, including the Barclay brothers themselves as children, and also those seeking a tax-free life. There is no income, capital gains or inheritance tax, nor any reciprocal arrangement with other jurisdictions. The tax system, such as it is, is based largely on property and a system similar to the Swiss forfait.

The Barclays themselves have argued that they have helped the island. And indeed some local families have benefited from their presence, both from jobs but also from their readiness to buy up land and property. The Barclays currently hold more than 25% of the total.

Over the years, the Barclays’ numerous battles appears to have put them on the side of modernity in an island which was until recently the last feudal state in Europe.

In 1995, the Barclays petitioned the European Court of Human Rights against Sark’s primogeniture law of inheritance, which would have left everything to their oldest son. The brothers had five children between them. A French playwright sued by Sir David last summer wrote about brothers pretending to be feminists protecting their daughter. Sir David, of course, had three other sons after his eldest Aidan to worry about.

In the mid 2000s, the brothers went again to Strasbourg to plead that Sark’s form of governance, based on feudal land-owning rights, was wrong as it was undemocratic. The Sark legislature changed both their inheritance and political laws and the litigation was withdrawn.

Yet still the disputes continued, most infamously after the candidates they had promoted for the new democratic parliament mostly failed to get elected. Kevin Delaney was quoted as saying Sark has “effectively written the longest commercial suicide note in human history”. Soon after the election, Delaney started to shut down the Barclays’ businesses on the island leaving roughly a quarter of the island’s population facing unemployment just before Christmas.

Richard Axton, Sark historian and Cambridge fellow, is, like many islanders, baffled by the Barclays behaviour in Sark over the years, regardless of their former employee’s newsletter. “Their aims were totally contradictory and opaque. They had positioned themselves as wreckers of ‘feudalism’ and champions of democracy and reform, but when Sark didn’t elect any of their candidates they claimed that they had no representation.”

The Barclays also asked for the return of a £200,000 donation to build the island hall and school because, they said, they weren’t told about an on-site bar. They sued the four trustees of the charity, ordinary islanders including a nurse and a garbage collector, who feared penury. An English judge presiding in Sark found against the Barclays and they had to pay costs.

In 2014, the Barclays lost a further argument that the island’s legal system was incompatible with European human rights law, but not before going all the way to the Supreme Court.

“They have weaponised the law,” said one relatively supportive islander.

At the same time, 55 islanders made a legal complaint in an attempt at a class action case in Guernsey alleging harrassment against the newsletter run by Delaney. They were unsuccessful in the complaint.

In 2012, Lord McNally, the government minister with responsibility for the crown dependencies, told the Guardian he deplored the newsletter’s tone, adding that “a number of people have said to me that it was the sustained nature of attacks in the Sark Newsletter that made them withdraw from public life.” The newsletter still targets some individuals including, most recently, a visiting FT journalist.

Having been too busy before a holiday to meet in person, Delaney, who has fashioned himself as a “pamphleteer” in the historic journalistic tradition, sent this response to a Tortoise request for comment: “Mr Delaney has no idea who you are nor does he have any idea who or what you purport to represent. He will not therefore be responding to your enquiry.”

The legacy of the Barclays’ purchase is not easily forgotten by the islanders, nor the years in which the land owned by brothers, more than one quarter of the island, has been left unproductive.

The island population has dropped from a recent high of 600 to just over 450 and numbers in the island school have halved to about 28 in the last decade or so.

Paul Armorgie, who sold his hotel group Stocks to a local group and not the Barclays, says decades of legal battles and more have left a mark “on the fabric of this society”, not least because there can be no employment in shuttered businesses.

Yet, over the past year, there have been signs of real change on the island. Last summer, a restaurant owned by the Barclays and at least one hotel opened. More than 200,000 vines, planted in a failed viticulture experiment, have been pulled up and the land could be returned to beef farming.

In many ways, this makes sense. Why would anyone, even billionaires, keep properties closed during peak holiday seasons?

In 2012, the Barclays denied they were motivated by money in Sark and said: “We have not invested in Sark to make money…Our motivation is the common interest of Sark and Brecqhou, as well as a genuine love for the Bailiwick, where our family has spent a considerable amount of time for decades past, long pre-dating our purchase of Brecqhou.”

Yet, one local resident, with a history in finance, said of the recent signs of rapprochement: “I think what’s happened is that the next generation or even generation after that has said, ‘this is a money pit’.”

Throughout their time on Sark, Sir David has become the dominant force with Sir Frederick hardly seen for years.

Over the past year, the relatively new Seigneur, Christopher Beaumont, has worked hard to mend fences.

“I have found him very personable, but I’ve yet to work out what he wants from Sark,” he says of Alistair Barclay, the youngest son of Sir David who has variously dabbled in motor racing and an online property company.

Many islanders have been trying to work out what the entire family want from this tiny island near France. “With Sark being the smallest crown dependency, I believe they genuinely felt, and maybe still feel, that they could be in full control of Sark, and masters of their own destiny, responsible only to themselves,” says Paul Armorgie. “They could make their own rules and so, effectively they could have their own mini-state.

“My theory is that this is all about their own domain. Like a mini-Monaco with privacy, secrecy, tax benefits and to be in control of all of those things. Jersey and Guernsey are run by politicians over which they have no control.”

This theory is common among Sarkees. At least four islanders I spoke to link the Barclays’ plans with the creation of a new Monaco – and yet the twins already live there. Some people on the island suggest that a mini-Monaco within a helicopter day trip to London could fly under the radar of international authorities trying to clamp down on offshore jurisdictions such as Monaco and even Guernsey, where a financial services commission exists to keep an eye on offshore transactions.

Feelings were strong enough for an online petition to be launched to “Save Sark from the Barclay Brothers”. Just under 14,000 people backed a complaint that “the Barclay brothers are trying to turn the tiny Channel Island of Sark into a personal tax haven through propaganda and coercion”.

All this furore seems a world away from the quarterly meeting of chief pleas, attended by just 13 of the 18 elected conseillers (Sark MPs) in January. Apart from the fact that the session begins with a Sarkese version of the Lord’s Prayer and the three women somewhat inexplicably wear black hats, the meeting is like any other local council meeting with concerns raised over electricity prices, the difficulty of appointing a new doctor and the need for a new boat.

Christopher Beaumont, who is keen to help re-establish a new island dairy and has helped organise music festivals with his wife Sarah since moving into the Seigneurie, wants to move on from the island’s long dispute with the billionaires next door.

Besides, he has no idea why the two men battled for so long with the islanders, including his father. “Why Sark,” he says. “Perhaps because it’s something money can’t buy?” 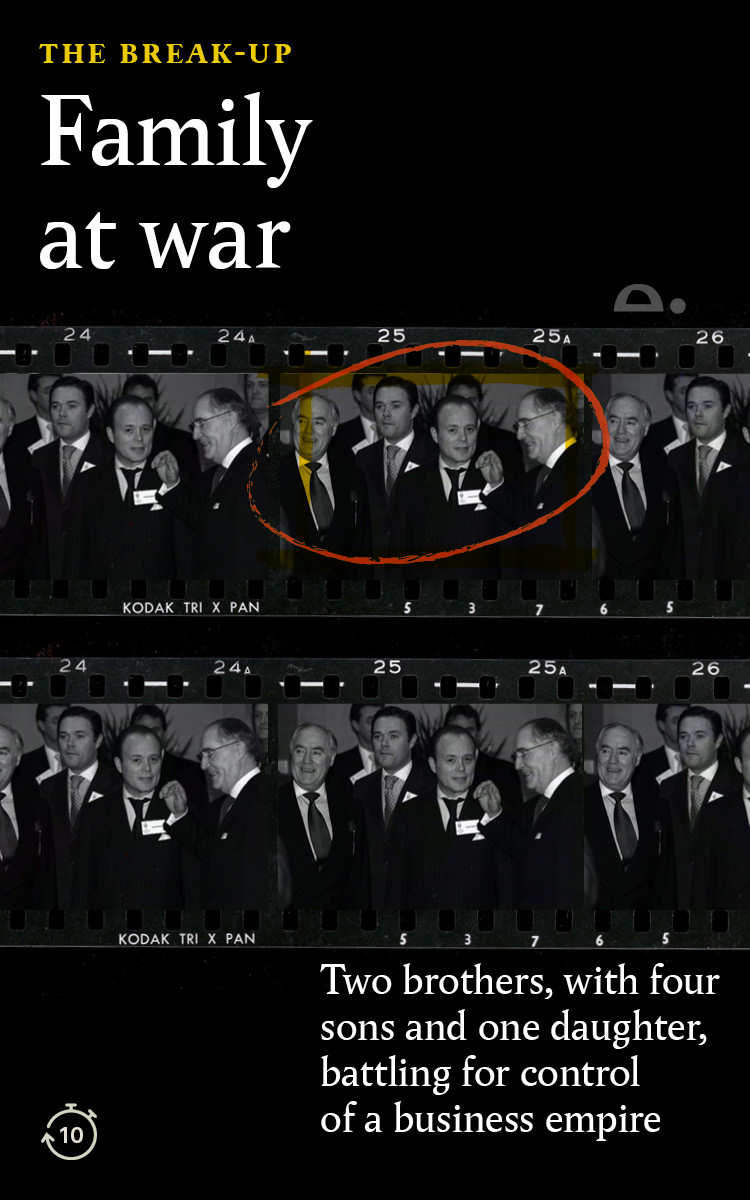 A family at war

A family at war

Two brothers, with four sons and one daughter, battling for control of a business empire