Campus justice | We have spent months examining the handling of rape and sexual assault cases on campus at UK universities. We held ThinkIns in our newsroom and on a number of campuses, as we heard from people and gathered evidence.

The book opens with two senior fellows of a fictional college, gossiping as they peer through binoculars. They are spying across a quadrangle through the windows of a woman undergraduate.

‘Calm down,’ replied the Bursar, ‘just have a look at this. That girl is exceptionally well endowed. That’s what we used to call a “perky pair” in the City, you know.’

Almost all of the women undergraduates mentioned at St Badley’s are members of a club called “The Virgins”. To qualify for membership, they must sleep, on average, with a man each week during term-time – or sleep with a fellow.

“‘I can see one of them in the quad now. Brazen hussy. Look at the length of that skirt! That’s what we used to call…’

First Time: Ooh-la-la, published in 2015, was not a best-seller – but one of the thousands of self-published books which will never garner much of an audience beyond the author’s immediate friends.

But, in this case, the authorship of the book contains a bigger twist than its plot. Its author Barry Able is, in truth, Peter Hutchinson, a former fellow at Trinity Hall in Cambridge.

Hutchinson was at the centre of the highest profile sexual harassment case in British higher education – a saga that hit the headlines repeatedly, as the college struggled to work out how to handle him.

After concerns were raised about comments he made to students, he was barred from being at events with students in 2015, excluded from the college in 2017, readmitted in the summer of 2019 and finally resigned in November 2019.

During this period, there was an argument within the college about whether things he said to students constituted harassment or were justifiable rhetorical questions arising from teaching sexually explicit literature.

The secret novel, unknown to the fellows who discussed expelling him for 19 months, casts new light on these arguments.

During the course of our investigation into Trinity Hall, a source alerted us to the existence of the book.

Hutchinson admitted he was the author, but cautioned against reading too much into the book, noting he wrote a volume called ‘Games Authors Play’. The first line, he says, is an allusion to “Barthes/Balzac”. The pseudonym, Barry Able, is a reference to Kafka.

He said: “Does the novel speak to a particular view of undergraduate women which is troubling in a teacher? I suppose that some might say so, but this is fiction, not life…an author very rarely thinks the same way as his main character.”

Hutchinson’s protagonist has clear echoes in the former languages fellow himself: he impresses people with his knowledge about verb conjugation – and he even goes by the name of “Peter”.

But Hutchinson says that this is a coincidence: the book is intended as a “travesty” of Evelyn Waugh’s Decline and Fall. The first name is intended an echo of that book, where the main protagonist is called “Paul”.

The book’s cover may also have given pause to fellows. It features an image of a stockinged female leg, which belonged to a Trinity Hall student.

Hutchinson said: “I don’t really see a problem about using an unidentifiable photo of a Trinity Hall student, especially since she was very pleased to provide it. I recall her saying she would look forward to showing it to her grandchildren in due course!” Hutchinson stressed he was not present when the photo was taken.

Some of the concerns about Hutchinson within Trinity Hall arose, in part, from facts that emerged from his acquittal in 2006 for sexual assault. In court, he had discussed the circumstances in which he would pat a woman’s bottom.

Remarkably, the book contains a commentary upon this case. Phrases from the legal process, used in court and in statements to Tortoise, are placed into the mouths of two of the characters in the novel.

In reality, Hutchinson was acquitted after two trials, the first of which ended in a mistrial. In the book, Peter is sent to prison, but released rapidly when it emerges that the court officers are themselves guilty of worse.

In real life, the woman who made the allegation against him was a former student who became a police officer; in the book, “Jane” is doing police work – albeit as a tax inspector.

In his statements to Tortoise and to the court, Hutchinson says there was no sexual design on the former student who accused him of assault – merely a misunderstanding, In the book, however, the encounter is explicitly presented as an attempt by “Peter” to seduce “Jane”.

In the book, “Peter” has been taught how to seduce a woman, following a formula which, he has been told, will work with “all” women. He has been advised to offer them gin and tonic, then: ‘Just keep going until I gently push you away, or I’m obviously upset, or I simply say “no”.’

So he tries this with Jane:

“‘You are looking fantastic tonight. I bet you have the most amazing black bra on,’ and he reached up to her top button. Perhaps that was a bit of a risk and Jane seemed to flinch slightly, but maybe she was just getting a bit excited…”

In this fictionalised account, having removed several items of her clothing, he says he “suddenly found himself hit on the head with a tumbler”:

‘You dirty pig! What do you think you are doing? Get off me!’

‘Eh?’ said Peter rubbing his head. ‘But I thought you… I thought… you wanted me to…’

‘You dirty, molesting pervert! How dare you suggest I was encouraging you in any way whatsoever!’

Hutchinson says that the recasting of the scene is “so broad that it bears no relation to real life. This scene obviously had to be done carefully”.

“Absolutely ludicrous! In the good old days a woman would just give you a slap on the face,’ he rubbed his check tenderly, ‘but in these enlightened times a woman just slings you in the dock…”

Hutchinson said that this was a reflection of the view of some women to whom he spoke. Hutchinson said “to look more broadly, the ‘view of women’ in the novel can actually be seen as ‘progressive’. Women are taking over what men have done before. In the opening scene, for example, an all-women’s society is in control, totally liberated, it is they who are ‘conquering’ men, not the other way around”. 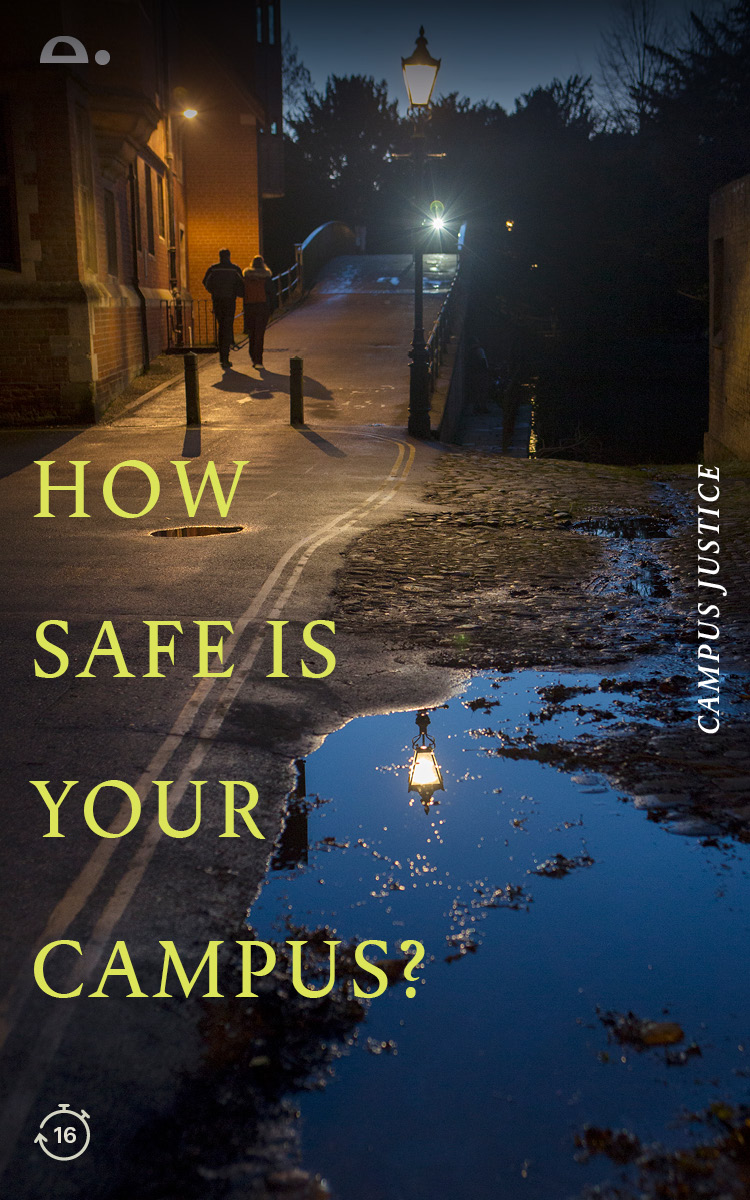 How safe is your campus?

How safe is your campus?