Drones | The assassination of Qasem Soleimani was a sharp reminder of the scale and scope of drone warfare. The use of remote-control weaponry, trialled by George W Bush at the start of the war on terror, and industrialised by Barack Obama, is now in the hands of Donald Trump.

The end of the soldier

They were promised to bring precision to the chaos of war – capable of surgical strikes that would help avoid civilian deaths.

But 20 years after they were introduced in America’s war on terror, the shadowy world of drone warfare is slowly becoming clearer, and the promise of bloodless war remains elusive.

Strikes in the Middle East have hit funerals, families – devastating communities in Yemen, Afghanistan, Syria and Iraq. Campaigns across the world have argued forcefully for governments to curb their use, warning that remote-controlled warfare lowers the threshold for deadly force.

But there is a new frontier – autonomy, killing machines that can think for themselves. Here, we chart the rise of the machines…

A few weeks later, the drone’s pilot, Scott Swanson, spots Osama bin Laden, the al-Qaeda leader targeted by the CIA who had masterminded the 1998 US embassy bombings in Kenya and Tanzania.

But the US Predator drone is still unarmed, and Bin Laden remains unharmed.

A fibreglass boat carrying explosives and suicide bombers approaches USS Cole, a guided missile destroyer of the US Navy, as it is being refuelled in Yemen’s Aden harbour. The small boat explodes and kills 17 US sailors. al-Qaeda claims responsibility for the attack.

The war on terror begins, under President George W Bush.

A few days after the attack, the US Congress passes the ‘Authorization for Use of Military Force’ law, which is used by subsequent administrations as congressional authority for military operations, including drone strikes.

America’s first military drone strike ends in failure. In eastern Afghanistan, the CIA fires a Hellfire missile from a Predator drone too early, missing the facility of Taliban commander Mullah Omar and hitting an empty truck.

Omar escapes and survives for more than a decade, dying of tuberculosis in 2013.

He is killed along with Kamal Derwish, a US citizen, whose death is the first known case of the US government killing a US citizen during the war on terror.

Barack Obama is inaugurated into office. He would later admit to authorising 542 drone strikes between January 2009 and January 2017, more than 10 times the 50 or so drone strikes authorised under the Bush administration.

Obama would raise the issue of drone warfare which dominates his tenure in a 2016 interview with The Atlantic: “The truth is that this technology really began to take off right at the beginning of my presidency. And it wasn’t until about a year, year and a half in where I began to realise that the Pentagon and our national-security apparatus and the CIA were all getting too comfortable with the technology as a tool to fight terrorism, and not being mindful enough about how that technology is being used and the dangers of a form of warfare that is so detached from what is actually happening on the ground.”

It hits the village of Zharki in Waziristan, Pakistan, but misses the targeted Taliban member, killing several civilians.

In 2009, the CIA conducts more than 100 drone strikes in Pakistan – as the covert war against Islamic extremism ramps up.

The US carries out 58 drone strikes in Pakistan over the course of just 102 days, according to the Long War Journal, in a relentless attack on al-Qaeda militants.

An AGM-114 Hellfire missile fired by a Predator drone kills Anwar al-Awlaki, an American citizen believed to be centrally involved in al-Qaeda. Obama calls it “further proof that al-Qaeda and its affiliates will find no safe haven anywhere in the world”.

During Obama’s re-election campaign the following year, former White House Press Secretary Robert Gibbs justifies the death of al-Awlaki’s son by suggesting he should have “had a more responsible father”.

Obama gives a speech at the National Defense University, declaring that “America is at a crossroads” and limiting his drone policy by constraining targets to those who pose “a continuing, imminent threat to Americans”.

The Campaign to Stop Killer Robots, a collection of NGOs seeking to ban lethal autonomous weapons, is launched in the House of Commons.

Three weeks after taking the city of Mosul in Iraq, Isis, which emerged out of an al-Qaeda affiliate, announces itself as a global Islamist caliphate, renaming itself the Islamic State and claiming authority over Muslims worldwide.

The US begins airstrikes, including drone attacks, on Islamic State targets in Iraq before expanding operations into Syria the following month.

The UK uses an RAF Reaper drone to carry out its first drone strike on Islamic State militants.

A US drone strike targeting an al-Qaeda compound on the porous Afghanistan-Pakistan border, where counterterrorism efforts are reliant on drone strikes, accidentally kills two innocent hostages, the American Warren Weinstein, kidnapped in 2011, and the Italian Giovanni Lo Porto, captured in 2012.

The White House releases a statement saying that it “had no reason to believe either hostage was present” and adding that “no words can fully express our regret over this tragedy”.

David Cameron becomes the first UK prime minister to direct an attack by an unmanned drone outside a formal conflict, after an RAF MQ-9 Reaper drone flown from a base in rural Lincolnshire kills Reyaad Khan, a 21-year-old from Cardiff suspected of fighting with the Islamic State, and two other Isis fighters, including a second Briton.

A parliamentary report later assesses that Khan did pose a very serious threat to the UK, but says that there is “a question as to how the threat is quantified” and that it is subjective “whether the actions of Khan and his associates amounted to an ‘armed attack’ against the UK or Iraq”.

US Army Colonel Steve Warren later says that the strike turned Emwazi into “a greasy spot in the ground”.

It is believed that the Harpy didn’t make this attack in its fully autonomous mode.

Barack Obama issues an executive order requiring the head of the CIA to publish the number of civilians killed by drone strikes in non-combat zones, but the order is revoked three years later by Donald Trump, whose administration calls it “superfluous”.

In January of the following year the Islamic State announces its inaugural drone unit, named “Unmanned Aircraft of the Mujahideen”, thought to be a fleet of small, relatively inexpensive drones modified and equipped with bombs.

President Donald Trump is inaugurated into office. He authorises 238 drone strikes in Yemen, Somalia, and Pakistan in his first two years in power, more than the 186 authorised by Obama over the same period.

According to the Russian Defence Ministry, the drones were sent by Turkish-backed Syrian rebels and operated autonomously.

Russia claims it can travel thousands of miles and create widespread and long-lasting nuclear contamination on impact.

Venezuelan president Nicolás Maduro survives an alleged assassination attempt when exploding drones detonate above him as he makes a speech at a military event in Caracas.

Some suggest that the incident was a ‘false flag’ operation devised by the government to allow suppression of opposition.

A global Ipsos MORI poll finds that 61 per cent of adults across 26 countries oppose the use of lethal autonomous weapons systems.

For the first time, the US admits to causing civilian casualties in its air campaign in Somalia, in an April 2018 strike. “It was not known at the time that there was a woman and a child present,” says Major General Gregg Olson, the director of operations for Africa Command.

The admission comes just a fortnight after Amnesty International releases a report claiming that 14 civilians were killed in just five strikes carried out by Reaper drones and manned aircraft in Somalia.

Tensions between US and Iran, already rising under the Trump administration, escalate after the Islamic Revolutionary Guard shoots down a US surveillance drone over the Strait of Hormuz.

The attack nearly ends in armed conflict after Trump orders a military strike against missile sites, before later backing down.

A drone strike by Houthi rebels on two Saudi Aramco oil facilities forces Saudi Arabia to shut down half of its oil production, about five per cent of oil production worldwide.

A US drone strike against Islamic State terrorists kills 30 pine nut farm workers sleeping in tents in a mountainous region of eastern Afghanistan.

France carries out its first ever drone strike, against militants in Mali, nearly a month after two French helicopters collided in the country, killing 13 soldiers.

Seven militants are killed in the attack.

The US assassinates Qasem Soleimani, an Iranian commander in the Islamic Revolutionary Guard Corps, near Baghdad International Airport with an MQ-9 Reaper drone fitted with Hellfire missiles. It is the first time the US has used a drone to kill another country’s senior commander on foreign soil. Iran’s supreme leader vows “severe revenge” on those responsible for his death. 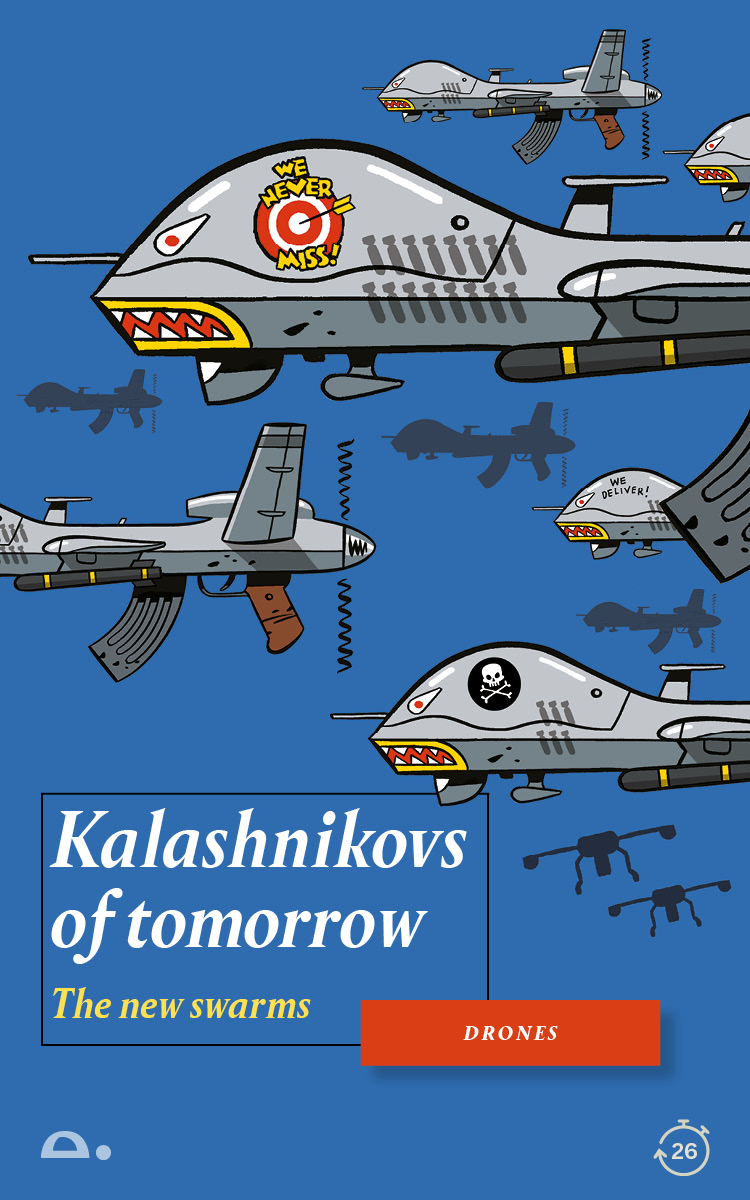 Charting the terrifying rise of the autonomous drone