Mary Higgs was a Victorian pioneer in women’s housing reform who dedicated her life to the establishment of hostels for homeless women and advising councils and government on ways to improve living conditions for the destitute. Disguising herself as a homeless woman, Higgs took to the streets, visiting workhouse wards and lodging houses, documenting her experience in books and pamphlets, most famously Three Nights in Women’s Lodging Houses (1905) and Glimpses Into the Abyss (1906). Her biographer Rosemary Chadwick said her writings “helped to fuel demands for more and better regulated women’s lodgings, and for lodgings geared to the needs of migrant workers”. She used her own home as a refuge for women, providing welfare centres for mothers and children and establishing a paper-sorting industry in order to employ impoverished women. Just before she died, aged 83 in 1937, she received an OBE for her services.

When the Chiswick Women’s Refuge opened in 1971, it was the first safehouse for women and children fleeing domestic violence. It gave rise to Refuge, the largest provider of services to women experiencing domestic violence in the UK, which currently supports 6,500 survivors. Within the existing legal framework, survivors of domestic abuse are often forced to choose between staying with their abuser or becoming homeless.

Labour peer Baroness Corston grew up on a council estate and left school at 16. After the death of six women at Styal prison, Baroness Corston was asked to review the state of vulnerable women in UK prisons. Her 2007 report called for drastic reforms to the criminal justice system that considered alternatives to locking women up. The Labour government rejected her proposal that women’s prisons become smaller custodial units. Over a decade later, in March 2018, Baroness Corston was one of the officers of the all party parliamentary group on women in the penal system to launch a major new inquiry into female sentencing.

Labour peer Baroness Corston grew up on a council estate and left school at 16. After the death of six women at Styal prison, Baroness Corston was asked to review the state of vulnerable women in UK prisons. Her 2007 report called for drastic reforms to the criminal justice system that considered alternatives to locking women up. The Labour government rejected her proposal that women’s prisons become smaller custodial units. Over a decade later, in March 2018, Baroness Corston was one of the officers of the all party parliamentary group on women in the penal system to launch a major new inquiry into female sentencing.

Agenda is an alliance for women and girls at risk that came about following Baroness Corston’s 2007 report into women and criminal justice. The alliance, which now includes organisations such as Homeless Link, Howard League for Penal Reform and Women’s Aid, was initially concerned with women’s penal reform but, since 2016, has looked at further issues threatening the safety of women and girls. In 2016, Agenda published research that showed one in 20 women in England have experienced extensive physical and sexual violence in both child and adulthood. It found that those who had experienced the most severe abuse had high rates of homelessness, substance abuse and poverty.

The director of Prison Reform Trust’s Transforming Lives, a programme that aims to reduce women’s imprisonment. In 2018, she co-authored Home truths: housing for women in the criminal justice system, a report highlighting the correlation between poor housing and poor outcomes for women. It advises local authorities and housing providers how to help women stay out of prison. Six in ten women are homeless when they are released from prison, and the lack of housing options for female offenders often leads to further criminal activity. The Ministry of Justice reports that 45 per cent of women are reconvicted within one year of release.

After spending many years sleeping rough herself, Perriman, now an established artist and writer, made her name after curating a touring exhibition entitled The Doorways Project. Moving between city centre doorways across the UK, listeners could hear recorded monologues with different homeless women, mimicking the places where these women often sleep. Her book Doorways: Women, Homelessness, Trauma and Resistance grew out of the material she collated. The book uses photographs, essays, interviews and the testimonies of eight women to document the untold stories of female homelessness.

Each month, many homeless women, refugees and asylum seekers living in the UK are forced to go without sanitary products. It was while Gabby Edlin was volunteering at an asylum seekers drop-off centre in 2016 that Bloody Good Period, now a national charity, was born. When Edlin inquired as to why sanitary products did not appear on the list of essential items, she was told they were only given in an “emergency”. Today, Bloody Good Period provides women in poverty with sanitary products. In 2019 alone, they helped over 2,000 women. As well as encouraging donations of both products and cash, the charity also campaigns for the government to cover period supplies.

Dubbed the “journalist you need to know in 2019” by Media HQ, Maeve McClenaghan won last year’s Royal Statistical Society’s award for best investigative journalism for Dying Homeless, a project co-authored with Charles Boutaud. The year-long investigation, published by the Bureau of Investigative Journalism, documented the number of people who died homeless in the UK between October 2017 and March 2019.

Seeking asylum and an escape from the violence committed towards women in war-torn Somalia, Mariam Ibrahim Yusuf came to the UK in 2008. Forced to leave her children behind, detained by UK immigration and spending many years homeless after the government rejected her claim to asylum, Yusuf has since dedicated her life in the UK to campaigning for the rights of female refugees. In 2016, she was honoured as Woman of the Year by the Women on the Move Awards, which celebrate the outstanding work of migrant and refugee women in UK society.

As women’s strategy manager at the charity St Mungo’s, Cat Glew works to improve the situations of women who are either homeless and at risk of homelessness. She was a key figure in implementing the findings of the report Rebuilding Shattered Lives, interviewing hundreds of women helped by St Mungo’s. The report revealed that nearly half of the women had experienced domestic abuse from a partner, with nearly three in ten citing this as the reason for their homelessness. More than 40 per cent had been abused as a child. St Mungo’s runs women-only projects in London and Bristol, including emergency shelters, hostels and a women’s psychotherapy service.

For over a decade, Professor of Applied Criminology at The University of Derby, Kate Moss, has been researching the issue of women’s homelessness. Her research for the European Commission in 2013, A Study of Women Rough Sleepers in Four European Countries, showed that most women she interviewed cited domestic abuse as the cause of the homelessness. She also importantly highlighted that services are mainly designed for men and that women across Europe are overlooked because they are often “hidden”. She advocates that policymakers should consider homelessness a male and a female issue, respectively.

With roots in the suffragette movement – after suffragette Georgina Brackenbury donated a property to act as a safe house for female activists – today the charity offers women and children salvation from domestic abuse, human trafficking and when leaving prison. For over 85 years, the charity has helped women regain independence by providing nearly 1,000 affordable homes across 11 London boroughs. 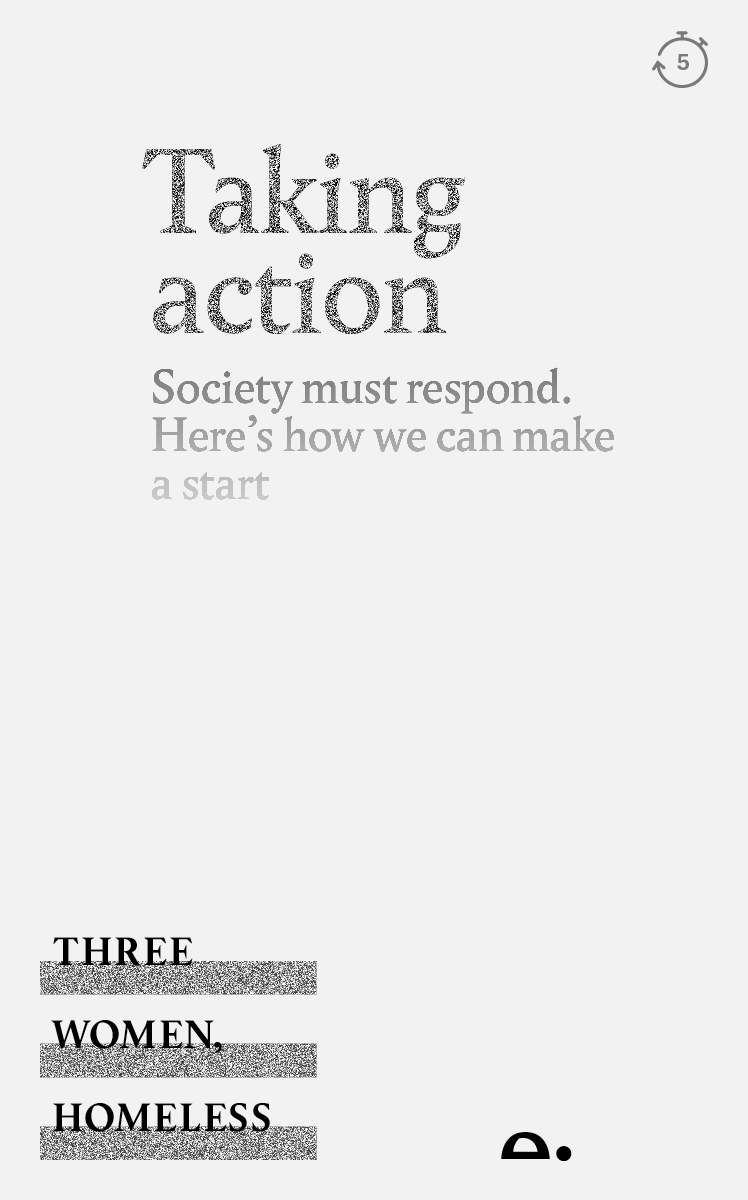 Society must respond. Here’s how we can make a start