A clear plastic bag holding a few possessions, little or no money in her pocket and no home to go to. This is often the stark situation facing a woman as the prison gates close behind her in England and Wales, having served just a short sentence.

We set out to understand more about the causes lying behind rising homelessness amongst women – and one of the striking factors was a huge increase in numbers who were being recalled to prison for minor misdemeanours.

Women jailed for usually non-violent and relatively minor offences have found themselves repeatedly taken back to jail for breaching the conditions of their release. When they come out, their lives have only become more disordered. That feels to us like a subject for much deeper investigation. For now, we wanted to take the first steps to understanding what is happening and how it impacts on homeless women leading chaotic lives. David Taylor, editor

In all likelihood, she will have been inside for a relatively minor offence like shoplifting. But, on this occasion, she could have been released from another spell behind bars, for being in breach of the terms of her licence for that previous minor offence.

It’s difficult for those outside the prison system, or without family who have experienced it, to be able to comprehend this Catch 22, but a licence recall can often mean a revolving door of release and return, as offenders are brought back by police when a warrant has been issued because of a failure to meet certain conditions. The consequence is dire even though the cause could be as simple as not turning up at an appointment with an offender manager.

For women, this door can swing harder and faster and in spite of what is – in essence – a petty offence to start with, many are recalled time and time again. Women with children, homeless women, women with multiple, complex needs caught up in a spiral of decline.

Toni, in our podcast Three Women, Homeless, told us that she had been recalled to prison 45 times in one year. This may or may not be accurate – she is a heroin addict and her counting could be way off – but she reeled off a litany of cumulative sentences that had been imposed. We discovered that the number of women in Bronzefield, the largest women’s prison in Europe, who had been recalled increased from 15 in 2015 to 555 in 2018/19.

A survey conducted at Bronzefield by the Independent Monitoring Board discovered that one third of the prison population will be there for three weeks or less. And 64 out of 116 sentenced women spoken to said they would be homeless upon release.

Published in November 2019, the report said: “The IMB has observed that the rehabilitation of prisoners and preparation for release is undermined by a combination of a high churn rate of prisoners and an appalling lack of suitable accommodation post-release. At any one time approximately one third of the prisoners will spend three weeks or less at Bronzefield: sufficient time to have a powerful negative effect on families, housing and employment, but not for any meaningful rehabilitation.”

Alison Keightley, chair of the IMB at Bronzefield, said: “Effective rehabilitation and resettlement continues to be undermined by external factors: short sentences, frequent recalls to prison under the provisions of the Offender Rehabilitation Act and the desperate shortage of suitable housing in London and the South East.”

In Home Truths: housing for women in the criminal justice system, published by the Prison Reform Trust and Women in Prison, a “chronic shortage of housing for women leaving prison” is at the root of the problem. “A lack of suitable housing can be a driver to offending itself. A homeless woman may commit a crime out of desperation to have a roof over her head, albeit in a police or prison cell,” it says.

Jenny Earle, of the Prison Reform Trust, explained: “Many of the women we spoke to said ‘without a home to go to you don’t stand a chance’. They are just literally being released to nothing. If they have been recalled to prison they don’t even get the £46 discharge grant. It’s worse than square one. Often they haven’t got the money for the necessary travel involved to meet their licence conditions.”

Women were caught up in a complicated compliance system, she said, which is designed for people who are a risk, usually men. Women have more typically committed small, non-violent offences. “Often they haven’t committed a further offence and their recall was mainly a failure to report to a probation officer. Often they say ‘we couldn’t comply’ but they don’t blame the probation officer and say ‘actually we have not been given a fair crack at establishing ourselves in the community’.”

If that sounds bureaucratic, Toni’s explanation of what happened to her makes it feel very human and real. For the mundane reason of missing appointments, this woman with a chaotic life, was returned to prison again and again.

“This is what happens,” she said. “Even if you got arrested for drunk and disorderly, and you done one day in prison, you would have to come in the community and be on a year’s licence no matter how long you done in prison. That means you have to go every week without fail to see this lady [an offender manager] and it’s all the way in Finsbury and you haven’t got the means to get there, you don’t know what day it is anyway, you ain’t got no phone and you ain’t got anywhere to live. Why are you going to probation…Then I don’t turn up and she sends a vulnerability marker out and reports me missing and then she recalls me back to prison and she says it’s for my own safety.”

In Rebuilding Shattered Lives, the homeless charity St Mungo’s noted: “The link between homelessness and offending behaviour can become an ongoing cycle: spending time in prison increases the risk of homelessness, while a lack of stable accommodation increases the likelihood of offending and reoffending.”

A Ministry of Justice survey found that 60 of prisoners believed that having a place to live was important in stopping them from reoffending. Reconviction rates are much higher for people who had been homeless before custody – 79 per cent were reconvicted in the first year after release, compared to 47 per cent of those who weren’t homeless.

Dr Kate Paradine, CEO of the charity Women in Prison said: “Many women are criminalised for being homeless, not having money to pay their bills and not having access to adequate mental health care and substance misuse support. The very community support services, like women’s centres, that address these issues have been forced to breaking point by a devastating funding crisis, made worse by government changes to the probation service and the associated upheaval of the last few years.

“The government have a strategy for reducing offending and the criminalisation of women, it’s time they put it into action and guarantee sustainable funding needed to build a network of women’s centres across the country. Failure to do so will only result in more women being needlessly forced back to prison.”

Audrey Gillan is a Scottish journalist based in London. Her documentary Tara and George, which told the story of a rough-sleeping couple, won Radio Programme of the Year at the 2019 Broadcasting Press Guild Awards 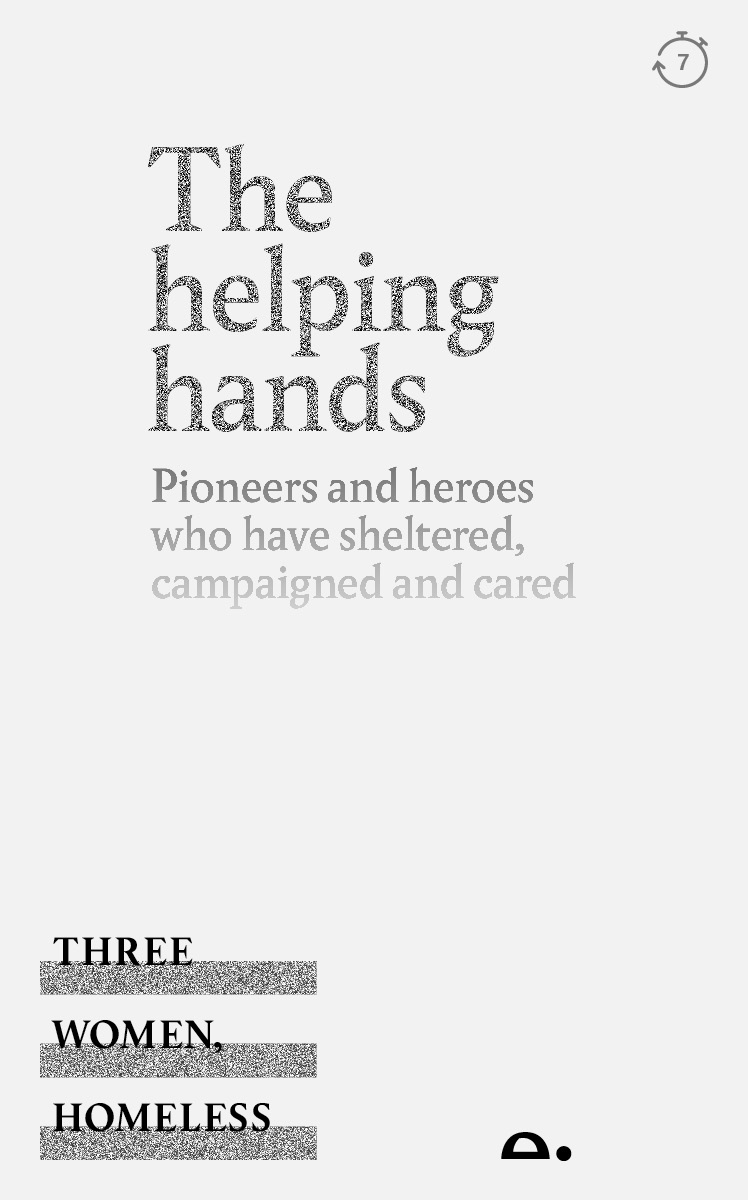 Pioneers and heroes who have sheltered, campaigned and cared