Two floors up in a building full of labs, the world’s coolest ecologists are working out how to halt climate change. They’re in Zurich, a short walk from the lake, counting roundworms, mapping the spread of invasive species, measuring soil carbon content from the Arctic to the Equator.

It’s highly unusual for a 33 year-old who did poorly at school to publish five papers in one year in the world’s most prestigious science journals, but that’s what Tom Crowther did.

It earned him no end of scorn from some of his peers, but, more than that, it earned him a central place in the debate on how to combat climate change. We sent Giles Whittell and Lindsay Riley to Zurich to catch Crowther’s thoughts as he emerged from a spell of unaccustomed silence. David Taylor, editor.

They may not really be the world’s coolest ecologists, but their leader says they are. This is Tom Crowther, a keen ping pong player and former member of the Welsh tennis team. Now 33, he has a staff of 30, research funding for 13 years and a department in his own name at Switzerland’s top science university. He’s not yet a full professor but he’s doing OK.

The Crowther Lab is counting worms because they’re a proxy for soil quality, and soil holds eight tenths of the world’s organic carbon. But before worms Crowther counted trees – and they made his name.

Last year, with his colleague Jean-Francois Bastin, he wrote a paper on “global tree restoration potential” that reverberated round the world. The paper mapped the land available for trees on a planetary scale. Crowther and Bastin claimed to have found enough of it to help save the planet from anthropogenic global warming. Their results attracted an inordinate amount of attention, and got them into deep trouble too.

“It felt like –” gulp “ – everything,” Crowther says. “It was both terrifying and exciting. When the message spirals away from you and you can no longer control it, it gets really scary. And given the massive size and political relevance of the message there was incredible positivity and negativity. It was an absolute roller-coaster of emotion.”

To give an idea of the highs and lows brought on by this single piece of research, there was a point in July last year when TV crews were queuing up outside the Crowther Lab and his publicist was scheduling interviews at one every 15 minutes. In August he won the British Ecological Society’s prestigious Founders’ Prize. There followed an almighty backlash within the climate science community, and three months’ self-imposed media silence from Crowther.

He broke that silence on a crisp afternoon last month. Breezing into the room assigned to us in a T-shirt and jeans, he said a lot of the criticism of his research felt personal and condescending. He said he’d had to contend with “a certain old guard” whose approval of new ideas was required before they could be “real”. And he ventured that one reason so many of his peers were vexed by his work was that they realised, too late, they could have done it themselves.

I’d known roughly what to expect: fluency, informality, good looks, maybe a baseball cap. Even so, his in-person performance was surprising for two things: a refusal to self-edit; and an astonishing level of confidence that, despite everything, he’s right.

His prescription is simple: plant more trees, or at least let them grow. The Science paper reported his team’s conclusions from a new effort to map the world’s ecosystems with a combination of satellite imagery and machine learning. They said that in principle – all politics apart – there were 0.9 billion hectares of “degraded” land available on the planet for forestation or forest restoration, and they went on to estimate how much carbon dioxide these trees could remove from the atmosphere over the next century or so.

It was such a big number – 205 gigatons, or two thirds of the atmospheric CO2 released by humans in industrial times – that if even close to accurate it could guide climate action strategies for decades. Instead it has been so furiously disputed that even Crowther seems now to have disowned it. “I do not think that you should talk about 200-250 [Gt of carbon dioxide equivalent],” he advised me in an email. “I think the real value is more likely to exist between 100 and 200.”

Rewind about a decade and Crowther is not an academic wunderkind but a jobbing grad student in Cardiff. Before that he was a schoolboy in Ruthin in Snowdonia, the son of two doctors, interested in snakes and bugs but not books especially, because he was dyslexic. He was kicked off his first-year undergraduate course at Cardiff for being, as he puts it, “disruptive”. More interested in tennis and football (“I’m up front – a striker”), he was only coaxed back to full-time study by a professor who suggested that he start thinking of ecology as a game.

Something clicked. “I know it sounds really simple and obvious,” he told a conference in Switzerland last year, “but [this advice] had an incredibly profound impact on me.” Having been merely fascinated by the natural world, he became competitive about it.

The tree-counting started at Yale, where he went as a post-doc in 2012. In a conversation with his house mate he learned that no one knew how many trees there were on planet earth. Not even close. Tree-counting didn’t seem a proper field of scientific endeavour, he says, but – drawn perhaps by a sense of uncharted territory – he had a go anyway.

The reason there was no good global tree number was that until then most counting had been local, with little pooling of results. So there was good information about tree density in a wide variety of ecosystems, but it was patchy. Crowther’s insight was that by matching what was known at ground level with what could be inferred elsewhere from satellite imagery, it ought to be possible to create a world tree map that counted trees everywhere, not just where people lived or ventured on research grants.

He persuaded ground-level tree counters to give him their tree density figures for parcels of land all over the world with a total area of 430,000 hectares. From these he calculated that there were about three trillion trees on Earth. And that, he says, was seven or eight times the most widely accepted previous estimate.

When his tree population work was published in Nature in 2015 it recalibrated an entire branch of science. Deforestation was still proceeding apace in Brazil and central Africa but the context was new. If not hopeful, it was, to some, marginally less apocalyptic than it had been.

Others have quibbled with the 3 trillion figure and Crowther himself isn’t wedded to it, but he had shown that the difference between previous best guesses and his new one was very large indeed. “It did change our understanding of the scale of it,” he says. It was also “just a cool idea” to offer what he calls the first real rigorous analysis of the number of trees on the planet. “People like science [topics] that they can easily relate to, and this was certainly one of them.”

It attracted the attention of DOB Ecology, a foundation funded by a Dutch retail fortune. After a long courtship Crowther and DOB agreed terms on an ambitious new lab to be devoted to climate mitigation. He looked all over the world for the best place to work – an unbelievable privilege for a mere PhD – and settled on Zurich as “a perfect match of excellent university with a beautiful city and surrounding geography”.

The first instalment of a pledged total of 17 million euros arrived a month after he did, and he started hiring. From the start, the Crowther Lab had its own publicist. This is partly because the foundation insisted and partly, as he likes to say, because “science without communication is nothing”.

Crowther has plenty of peers who would say, in private if not in public, that so far his lab’s output has involved a lot of communication and precious little science.

Over Christmas I contacted three of the most outspoken critics of the July 2019 paper. All had published “technical comments” (translation: brutal takedowns) in the October issue. I asked if they were satisfied with his team’s response to those comments, which was to concede errors of context and communication but stick to all the big numbers in the original paper; 0.9 billion hectares, a trillion trees, 205 Gt of carbon.

They were not satisfied. Pierre Friedlingstein of Exeter University said the team had “magically” come up with a new basis for the 205 Gt figure. Joseph Veldman of Texas A&M University said the original paper double-counted soil carbon and the response was “both wrong and deceptive”. Simon Lewis of University College London called the team’s carbon density estimates “shockingly bad”. Separately, Colin Prentice of Imperial College, London, has written: “This group taught us that the technique of ‘rebutting’ criticisms by repeating indefensible statements is no longer confined to politics.”

That will have hurt. Indeed, Crowther says the academic and twitter backlash was “bruising” and “horrible”. And yet, by the time we meet, the bruising seems to be fading. The lab is busy and he seizes on the suggestion that he’s the victim of professional sour grapes on the part of rivals who failed to grasp an opportunity lying in plain sight.

“Yes!” he says. “But that’s often the hardest thing to do in science. Part of the reason so many people were annoyed was that so many people could have done this. And I understand the feeling. When I see big science papers on my topic I go, ‘could I have done that?’”

One of his past mentors, who declines to go on the record because his view will be seen as partial, calls the negative reaction to the July paper ridiculous. Crowther’s critics have all published work containing bold assumptions with big impacts on their conclusions, this person says. The question in a field with so many huge unknowns should be simply “whether the… work takes us forward”.

It’s taken Crowther forward, and others in the field say climate science needs more people like him who can cut through to the public.

His time is parcelled out in small increments, like a CEO’s. After half an hour we’re almost done. So what still holds good from the paper that threatened to turn his world upside down?

“That there is a huge amount of degraded land across the planet that is available for forest restoration,” he says. “Places where forests would naturally exist but they don’t because of human activity in the past. And with a bit of help or just by leaving these places alone we could really regenerate a lot of natural ecosystems that could have huge benefits not just for climate impact but for biodiversity and humans around the world.”

Some will say he’s moved the goalposts. Others: he can still score. 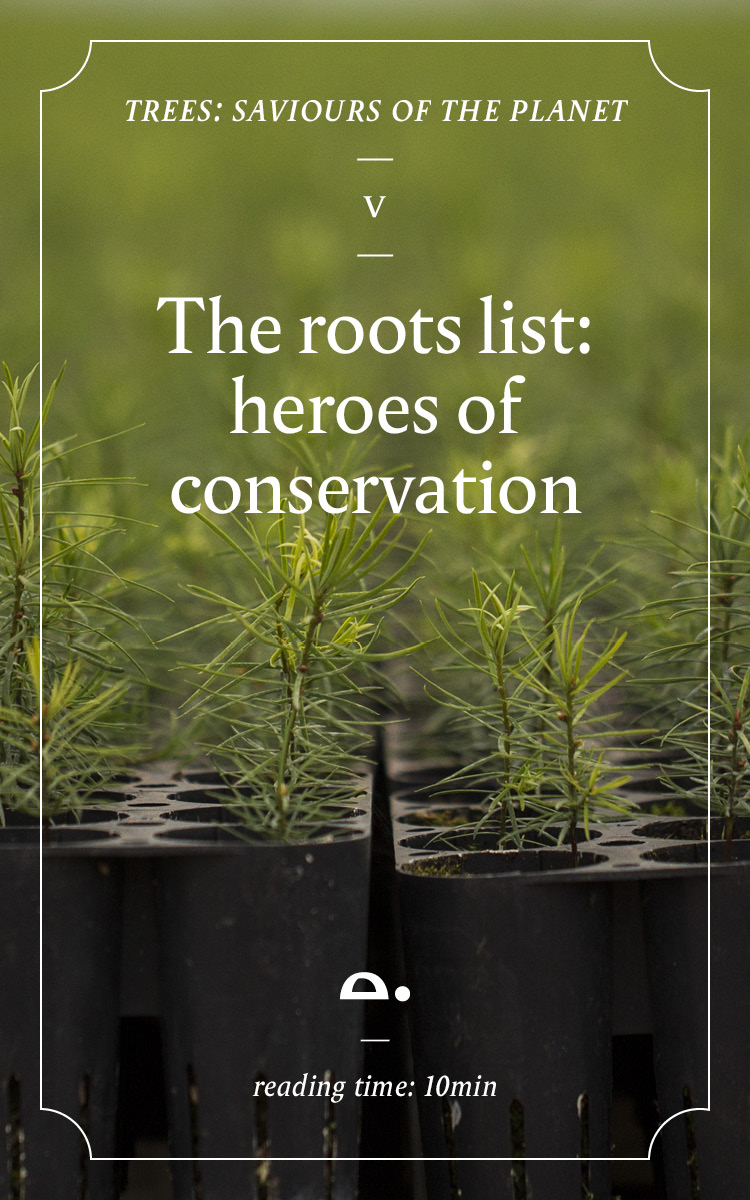 Inspirational heroes who have written, campaigned, climbed – and died – in defence of trees