Tech States: Apple | Apple is more than a company. It is a superpower. It was the first company to be worth more than $1 trillion, a size matched by under 30 national economies. And like the other tech giants that now shape our everyday lives, it has global influence ŌĆō like a nation state.

Often taking a minimalist approach, Apple has gained a reputation for producing some of the worldŌĆÖs best advertisements. TheyŌĆÖve used historic figures and poked fun at competitors, all while maintaining a level of sophistication that reminds consumers Apple is more than just a computer or device.

A series of key advertisements show just how much has changed across five distinct eras.

The Apple I, the computing kit that was mostly built by Steve Wozniak in 1976, was such a bedroom project (or, as the legend would have it, a garage project) that it wasnŌĆÖt really advertised in any formal way. It wasnŌĆÖt until after its incorporation in 1977, and the release of the Apple II in the same year, that Apple started thinking about advertising its wares properly.

The new company hired a seasoned marketer called Regis McKenna ŌĆō who declined a 20 per cent share of the company, preferring cash ŌĆō to help with its campaigns. McKennaŌĆÖs team designed whatŌĆÖs technically AppleŌĆÖs second logo, although itŌĆÖs often thought of as its first, a rainbow-coloured apple with a bite take out of it, chosen so that it couldnŌĆÖt be mistaken for a cherry. The ads from this era established something of a template for the future, emphasising fun and creativity.

The Macintosh was Steve JobsŌĆÖ creation, designed by him and a team of ŌĆ£piratesŌĆØ while most of the rest of the company concentrated on the Apple II, the Apple III and the new Lisa. Jobs wanted the promotion of the machine to impress people almost as much as the machine itself. So the agency Chiat/Day, which had acquired the advertising division of McKennaŌĆÖs operation, set about making a memorable series of campaigns.

The most memorable part came right at the beginning ŌĆō with the TV advert known as ŌĆś1984ŌĆÖ, which was directed by Ridley Scott (who had recently made Blade Runner) and aired during that yearŌĆÖs Super Bowl. It didnŌĆÖt show the Macintosh once. Instead, it showed a female athlete smashing the image of a Big Brother-like figure. For sale was an idea more than a product: freedom.

Impressive as it may have been, the Mac was expensive and didnŌĆÖt sell very well. Its creator, Jobs, was eventually forced out of Apple, in 1985, for his hubris. So began a difficult period for the company, as it underwent changes of leadership, struggled against a rising number of competitors, and eventually faced bankruptcy. The adverts from this time are very similar, in tone and in look, to those published over a decade before ŌĆō but the products they displayed didnŌĆÖt hold much appeal for consumers.

With Apple foundering, Jobs was returned to the company in 1996 and then made CEO a year later. With the British designer Jony Ive at his side, he developed the cheerful-looking iMac, then rehired the agency that had done the campaigns for the original Mac (now known as TBWA\Chiat\Day) to promote both it and Apple in general. They came up with a campaign and a slogan that are among the most celebrated in marketing history: pictures of various thinkers, inventors and artists, including Albert Einstein, Maria Callas and Bob Dylan, alongside the words ŌĆ£Think differentŌĆØ. Again, Apple was selling an idea more than a product; although it also gained new confidence in its products during those years, not least because they were beautifully designed. Many subsequent ads featured the companyŌĆÖs latest device, from the iPod to the iPad, on a white background.

TBWA ŌĆō or, more specifically, a dedicated arm of TBWA, called the Media Arts Lab ŌĆō has remained AppleŌĆÖs advertising agency in the years since Tim Cook took over in 2011. Increasingly, their work concentrates on what Apple devices can do (e.g. the famous ŌĆ£Shot on iPhoneŌĆØ campaign) or on the companyŌĆÖs broader ideals. Visitors to the Consumer Electronics Show in Las Vegas in January 2018 were confronted by a massive billboard with the words ŌĆ£What happens on your iPhone, stays on your iPhoneŌĆØ; the first entry in an ongoing series of advertisements about AppleŌĆÖs commitment to privacy.

Words by Peter Hoskin. All images courtesy of Apple and Getty Images 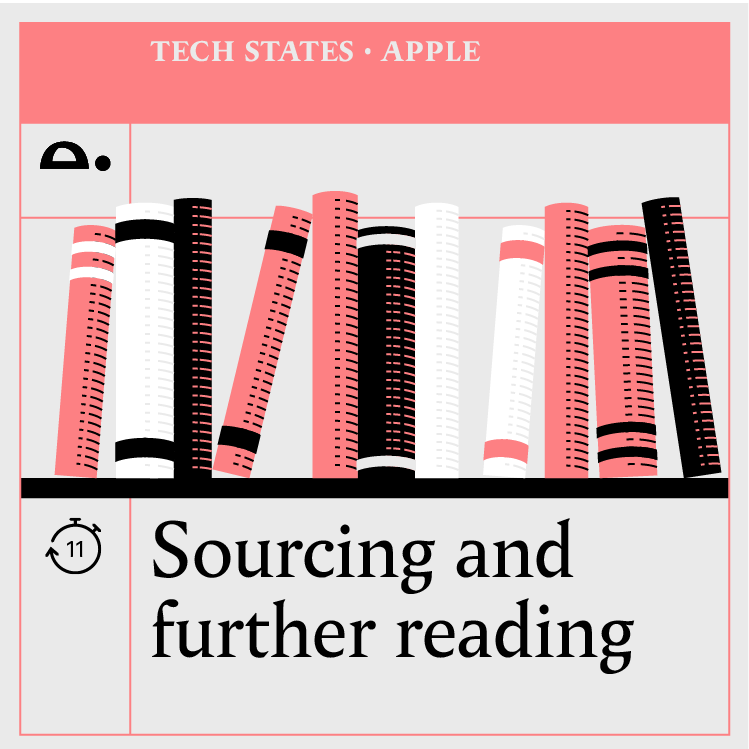