In his last quarterly meeting with analysts on 30 October 2019, the same day Apple released its £249 AirPod Pro headphones, Tim Cook did his best to sound bullish.

Apple’s revenue in the September quarter had risen 1.8 per cent to $64 billion, he said, beating expectations. The App store and Apple Pay saw “double digit” growth across all five of its geographic segments. The company’s fast-growing services division was now in its own right the size of a Fortune 70 company. Wearables, including the Apple Watch, were flying off the shelves.

Its market capitalisation of $1 trillion puts it on a level with a mid-ranking nation state. And, like any country whose financial health relies on a single commodity, Apple’s own economy is vulnerable if demand for that product dips.

In his 2,200-word opening remarks that day in October, Cook dedicated only 260 words to Apple’s flagship product: the iPhone. On the face of it, that was surprising, since the smartphone has completely changed the landscape of mobile technology since it was introduced in 2007 and, since 2013, has provided more than half of all Apple revenues each year.

After a decade of plenty, Apple is suffering a mid-life crisis. The iPhone is in serious trouble, having become both too good and too expensive. In a maturing smartphone market, where every high-end device looks and feels the same, why should consumers shell out £1,000 for the newest iPhone when both the previous year’s iteration and the equivalents from Samsung and Huawei are almost as impressive?

As Cook admitted in a letter to Apple investors in January, “iPhone upgrades… were not as strong as we thought they would be.” The prior law of upgrades, get a new phone every two years, no longer applies.

So what does the future look like for Apple’s economy – one of only three trillion dollar enterprises? (At the time of writing the others were Microsoft and Saudi Aramco). Where is the growth going to come from in the next decade? When will the magic of the Jobs era be repeated?

In the short term, Cook has stemmed the bleeding from its iPhone business by offering financing, reintroducing older models at cut-down prices in markets such as India, and has started a trade-in programme for owners of older models.

In China, this seems to have worked, to an extent. In the fourth quarter of 2019, Apple sales in China fell by two per cent year-on-year, a marked improvement on the 27 per cent decline posted in its first quarter. But it’s still not as good as competitors such as Huawei, which increased domestic smartphone shipments by 66 per cent year-on-year in October, according to market research firm Canalys.

Cook is also trying to fill the revenue hole by enthusiastically expanding its service business, selling apps and subscription products such as music streaming services to existing customers. Service revenue grew 18 per cent in the fourth quarter of 2019 and now accounts for 20 per cent of Apple’s revenue mix. Gross profit margins on services rose to 63.7 percent last year, from 55 percent in 2017. The margin on products, by contrast, fell from 35.7 percent to 32.2 percent over the same period.

“Most of the big innovations Apple has produced post-Steve Jobs have been complementary,” said David Yoffie, a professor at Harvard Business School who has followed Apple closely for years. “Those businesses do well but they aren’t the kind of innovation that the iPhone was. Steve would never have been comfortable with this imitative strategy in services. His whole approach was to figure out a way to do something big that would change the world.”

So what is the next big thing for Apple? The Information last year reported that the company was lining up two augmented reality (AR) devices – a large headset and a sleeker pair of glasses – for release in 2022 and 2023 respectively. Such devices, which would display digital imagery and information in front of a person’s eyes without completely obscuring their view, could replace the iPhone within 10 years, Apple sources told the website.

Apple’s behaviour in the past few years has added credence to such reports: it has acquired firms with expertise in AR and virtual reality (VR) including a Canadian company called Vrvana and SensoMotoric Instruments, which develops eye-tracking technology.

Who gets rich in Apple’s economy? In a general sense, it is its shareholders.

As of October 2019, the company had almost 4.5 billion shares outstanding, held by over 23,000 investors, including both individuals and institutions. But specific investors are, of course, more powerful than others. The US investment group Vanguard owns more shares than anyone else; although its competitor BlackRock owns far more shares with voting rights attached.

Outside of institutional shareholders, the biggest individual owner is the chairman of Apple’s board, Arthur D. Levinson. Laurene Powell Jobs, Jobs’s widow, has also held billions of dollars worth of shares.

In 2013, Tim Cook responded fiercely to those accusing Apple of avoiding huge amounts of tax by channelling income offshore. “We pay all the taxes we owe,” he said. “We do not depend on tax gimmicks … we do not stash money on some Caribbean island.”

This was true – but only partly.

Apple’s two Irish subsidiaries, which suck in most of the company’s non-US profits, did not funnel their gains into a tax haven. Instead their head offices were labelled legally “stateless” for tax purposes, allowing Apple to gain roughly the same tax effect without having to actually shift profits offshore.

Apple’s tax strategies were thrown into the spotlight in 2016 after the European Commission concluded that its Irish tax deal amounted to a quarter of a century of illegal state aid.

Fining the company €13 billion, the Commission said Ireland has enabled Apple to pay substantially less tax than other businesses over many years. “This selective treatment allowed Apple to pay an effective corporate tax rate of 1 per cent on its European profits in 2003 down to 0.005 per cent in 2014,” it said.

Cook reacted angrily. “We never asked for, nor did we receive, any special deals,” he said.

Like similar cases involving Google, Facebook and Starbucks, the tax battle between Cook and the Commission exposed fundamental weaknesses in how countries tax multinationals.

Broadly speaking, governments only have the right to tax a company’s activities when it has a physical presence on their soil. Many global companies – especially those selling digital services – have taken advantage of these 100-year-old rules by using complex arrangements with names like the Double Irish or the Dutch Sandwich to divert their profits into low tax jurisdictions.

A British customer of Apple, as a basic example, will receive an invoice from the group’s Irish based company. Ireland has a lower corporation tax rate than Britain.

Apple also had another good reason to keep its cash offshore. Under US tax rules in place until 2018, American companies were subject to a 35 percent corporate tax rate on both domestic and foreign income. The tax charge on the foreign cash was deferred, however, until it was brought into the US. As a result, Apple accumulated more than $250 billion in foreign earnings in Ireland.

Because the money wasn’t in the US, it wasn’t subject to the 35 percent charge. And thanks to the Irish arrangement, it wasn’t subject to tax there either. The set-up led to a 2013 Senate committee accusing Apple of being “among America’s largest tax avoiders”. The committee said that Apple had used complex techniques to shift US profits to Ireland – something the company denied.

In 2018 the tax landscape changed dramatically – and to Apple’s benefit.

Thanks in part to a sustained lobbying campaign by American corporates and the personal efforts of Tim Cook to persuade Donald Trump of the need for tax reform, the President slashed the repatriation rate of corporate cash held abroad to 15.5 percent.

Apple promptly returned $252.3 billion from overseas and paid $38 billion in tax. By bringing the money back under the new rules, Apple saved $43 billion in comparison to what it would have paid under the old system.

Exactly what Cook talked about with Trump remains unclear, but we know two things. First, Apple’s corporate disclosures show that its lobbyists discussed tax in the majority of quarters between 2009 – 2019.

Second, an internal memo sent by Cook in 2016 – and released by Techcrunch – explained to Apple employees why he had met Trump when the latter was still President-Elect. Alongside privacy, security and education, Cook said he discussed “other things that are more business-centric — like tax reform — and something we’ve long advocated for: a simple system.”

The savings on foreign repatriation wasn’t the only benefit to Apple. At the same time, Trump also lowered the domestic corporate tax rate – slashing it from 35 percent to 21 percent. As a result, Apple’s own corporate tax rate plummeted. From paying $15.7 billion in taxes in 2017 at a rate of 24.6 percent, the company paid only $10.4 billion last year at a rate of 15.9 percent, its most recent annual report shows.

The total savings to Apple from Trump’s tax reforms, therefore, are approximately $48 billion. 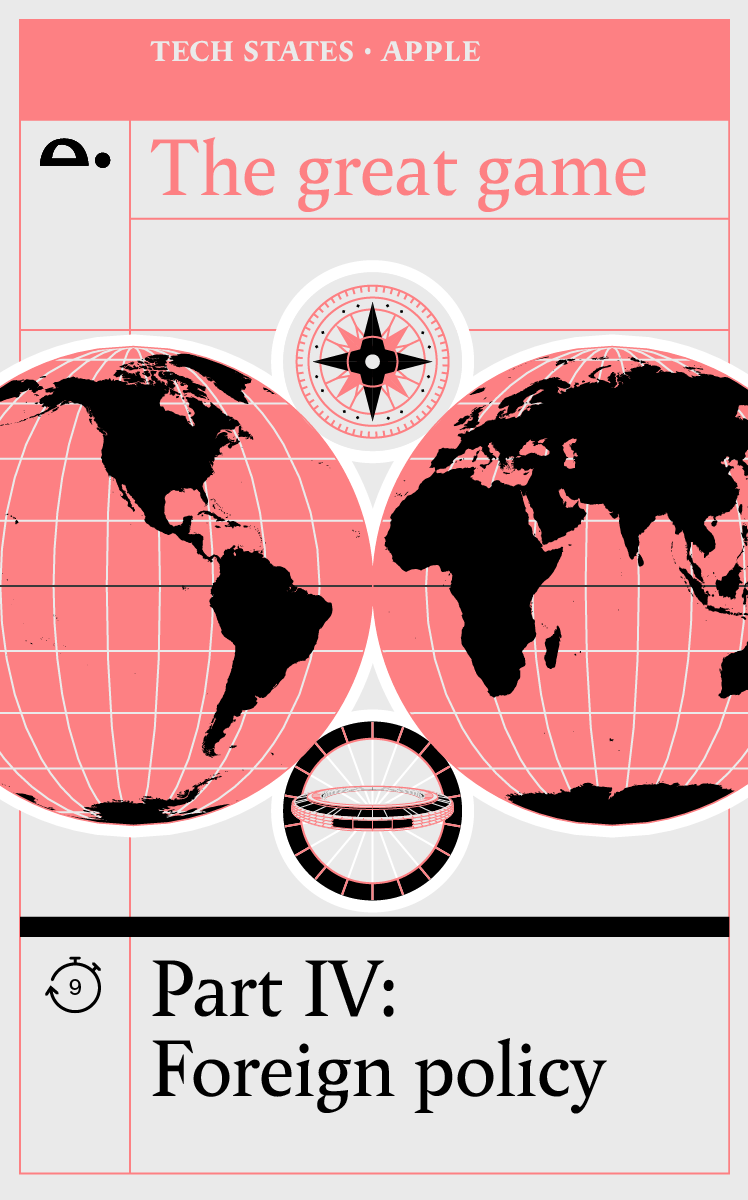