During the 2010 ‘All Things Digital’ Conference in Palos Verdes, California, Steve Jobs was asked about Apple’s values. It was a short conversation.

“The core values are the same,” he said. “We come into work wanting to do the same thing today as we did five or ten years ago, which is to build the best products for people.”

Jobs had previously articulated his vision in more detail. In what is considered one of Apple’s founding documents, a memo sent out in September 1981 set out 12 values. These included: “We are all in it together, win or lose”; “We will set aggressive goals”; and “One person, one computer”.

The only value that reflected any wider social obligation, beyond the creation of beautiful products, was number five – and it was deliberately vague. “We are here to make a positive difference in society, as well as make a profit.”

Such a laser-like focus on products saved Apple from bankruptcy and laid the groundwork for its trillion-dollar status today. Jobs was content that Apple didn’t have a corporate vision; that would have been a distraction.

Under Tim Cook’s leadership, who took over the company after Jobs died in 2011, that position has changed. “When I think of ethics, I think of leaving things better than you found them,” he told students at Duke University in 2013. “That goes from everything from environmentally, to how you work with suppliers with labour questions, to the carbon footprint of your products, to the things you choose to support, to the way you treat your employees …. Your whole persona fits under that umbrella.”

At the beginning of 2016, Apple added a new section to its regular financial statements, listing its six key “values”. Taking these together with speeches given by Cook and his top lieutenants, a picture of Apple’s constitution emerges: what Cook’s company stands for; what it cares about; what it hopes to change. Apple is now a company with values.

But how much they live up to them, and which values they leave out, are different questions.

In 2007, Greenpeace lambasted Apple for using damaging materials in the original iPhone including bromine, chromium, lead and PVC. A few years later, the company was criticised by Chinese environmental groups for ignoring pollution and poison within its supply chain.

Fast forward to 2015, and Apple was named one of the cleanest data centre operators in the world by Greenpeace. “Other Fortune 500 CEOs would be well served to make a study of Tim Cook,” the group wrote. In 2017, Apple received a B- grade from the campaign group, the second best out of 17 major companies.

The company now uses 100 per cent renewable energy across all of its operations after constructing wind and solar farms to sustain data centers, retail stores and corporate offices – it has reduced its carbon footprint by 35 per cent since 2015 to sit at 25.2 million tons of CO2. It promises a future in which it doesn’t need to mine anymore because it recycles old products (a “closed loop”), but it has not announced a clear, definite timeline.

There are important caveats, however. Apple outsources most of its manufacturing process to third-party suppliers, only some of which have committed to the renewable energy goal.

Apple states that privacy is a “fundamental human right” and believes “personal data belongs to you, not others”. It’s a principle forged out of realpolitik – and particularly from Apple’s desire to differentiate itself from its scandal-plagued rivals, Google and Facebook.

“It’s not like they don’t believe in it,” Steven Levy, an author of multiple books on Apple, told us. “They do. But it also happens to fit their business model.”

In 2015 the FBI obtained an iPhone 5C used by one of two people responsible for a mass shooting in San Bernardino, California, which left 14 people dead. Officers were unable to get into the password-protected phone, so they asked Apple to disable its security features. Cook rejected the request, calling it the “software equivalent of cancer”. The FBI eventually backed down when it worked out it could crack the phone on its own.

“Think about where society goes if we’re afraid to tell each other our opinion,” Cook said in 2019. “If we’re afraid that somebody’s listening, or watching, or monitoring, or we’re under surveillance.”

Apple works with more than 200 suppliers, from miners to refiners to manufacturers. Since Tim Cook took over, the company has made significant progress in ensuring that abuses in its supply chain are stamped out.

In 2012, for instance, Apple joined the Fair Labor Association and started publicly listing the company’s suppliers. Last year, it completed 770 supplier assessments in 45 countries, according to its annual Supplier Responsibility report. Around one percent were “low performing”, compared to 14 per cent in 2014.

According to the report, 27 “core violations” were uncovered including one underage labour case involving a 15-year-old, and two cases of debt bonded labour, where a person pledges services as security for the repayment of a debt.

And yet dealing with suppliers based in desperately poor countries carries an inherent risk.

In 2016, the Washington Post exposed how cobalt miners in the Democratic Republic of Congo worked under the constant risk of tunnel collapse. The cobalt was transferred to a single Chinese company that supplies some of the world’s largest battery makers. They, in turn, produced batteries found inside products such as Apple’s iPhones.

Apple responded by acknowledging that Congolese cobalt had made its way into its batteries, and promised to work with the Chinese company to improve conditions. It now treats cobalt like a conflict mineral, requiring all refiners to agree to outside supply-chain audits. Its latest supplier report shows that it has launched a vocational training programme in the DRC for vulnerable youths, teaching them metalwork and masonry.

The potential for controversy has not been eliminated, however. Fourteen Congolese families filed a lawsuit in Washington DC against five tech companies including Apple, alleging that their children either died or were badly injured while mining cobalt. The lawsuit, first reported by the Guardian newspaper, alleges that the US tech giants “have known for a significant” amount of time that child workers are used in the “dangerous” mines.

An Apple spokesperson said the company was “deeply committed to the responsible sourcing of materials” and “if a refiner is unable or unwilling to meet our standards, they will be removed from our supply chain. We’ve removed six cobalt refiners in 2019”.

Arguing that Apple went beyond legal requirements in the US because it prohibited discrimination against gay, lesbian, bisexual and transgender employees, Cook said: “Protections that promote equality and diversity should not be conditional on someone’s sexual orientation. For too long, too many people have had to hide that part of their identity in the workplace.”

Eleven months later, Cook came out as gay in an essay published on Bloomberg. “Being gay has given me a deeper understanding of what it means to be in the minority,” he explained. “It’s also given me the skin of a rhinoceros, which comes in handy when you’re the CEO of Apple.”

Apple’s overall record on diversity is mixed. Only 33 per cent of employees are women – and that figure has increased from 30 per cent in 2014, its figures show. Apple’s diversity and inclusion reports show that while the company has a higher percentage of black and Hispanic employees than other tech companies, many of them were in lower-paying retail roles. Nine per cent of Apple employees are black, for instance, but black employees comprise 15 per cent of retail workers.

In December 2019, Tim Cook visited San Jose State University where he sat down with the Pakistani activist Malala Yousafzai to discuss education. It followed a partnership in 2018 with the Malala Fund to help girls receive a safe education. Separately, Apple has pledged $100 million to 114 underserved schools across the US, which includes donating an iPad to every student and teacher.

It has also launched an Everyone Can Code initiative in the US and across Europe: a full-year course designed by Apple engineers to teach coding and app design. Cook believes coding should be taught as a “second language” in primary schools.

For all its focus on education, however, Apple is at least partly responsible for the seven hours a day which, on average, are spent looking at screens by US teenagers, according to a study last year by Common Sense Media. Such tech dependency is also seen in tweens and pre-school children and has been linked to behavioural problems, increased mental health issues, and obesity.

Cook insists that Apple doesn’t care about maximising a user’s screen time and has introduced reporting features such as Screen Time. But the company’s fast-growing services division – with new subscription gaming, entertainment, and news programs – depends exactly on consumers spending more time looking at their screens.

On accessibility, Apple devices let you write a text or email without seeing the screen. A blind person can take a selfie just by hearing how many faces are in the frame, while iPhones also have magnifiers, and Airpods can be used as hearing aids. 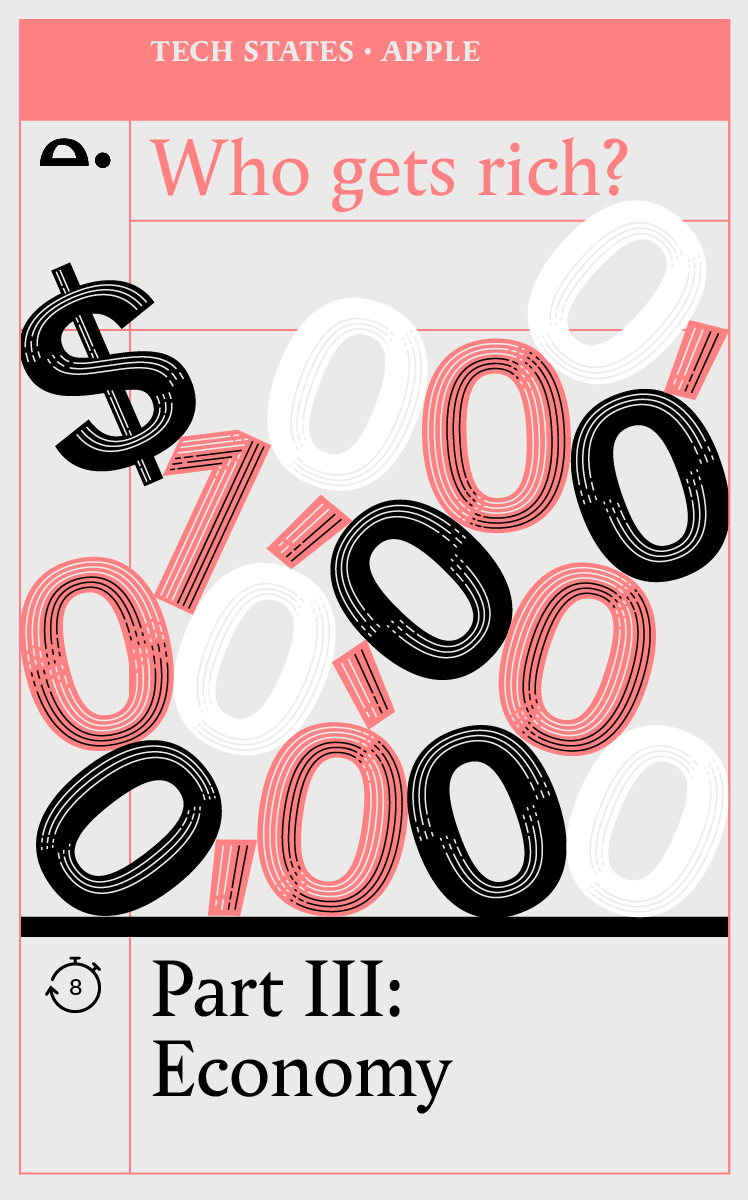 The economy: who gets rich?

The economy: who gets rich?