Net Zero 2030: a Tortoise moonshot | The UK has set itself a target that the entire world needs to get to: net zero carbon emissions. But the 2050 target date isnŌĆÖt nearly soon enough. We need to get there faster and we need to keep on removing carbon from the atmosphere to have a hope of limiting warming to 2 degrees C. But how?

WeŌĆÖre in uncharted territory. The last time carbon levels in our atmosphere rose by as much as they have in the last half-century, it took 10,000 years.

This means rapid climate change, and it means controlling climate change could soon become an existential challenge for business, societies and our species.

How to respond? Last week in our newsroom we crammed four ThinkIns into four hours and populated them with questing minds to come up with some answers.

We wanted to understand ŌĆ£the business of net zeroŌĆØ ŌĆō how to cut carbon emissions back to pre-industrial levels, who needs to provide the leadership, and who will pay.

The four sessions covered the science of climate change, divestment, climate activism and the question to which so many trends and so much evidence leads: can companies change enough to make the transition to a sustainable future? Will business, in the end, be part of the problem, part of the solution, or part of both?

Go to the coast ŌĆō any coast. What do you see? ItŌĆÖs melted ice.

Between 20,000 and 10,000 years ago sea level on Earth rose by 120 metres thanks to gradual global warming. The 2019 version is much faster. The rate of change now is ŌĆ£unprecedentedŌĆØ and rising carbon dioxide levels are the cause.

That was the reality check offered by Martin Siegert of the Grantham Institute, part of Imperial College, to kick-start our CEO Climate ThinkIn. That is the ŌĆ£crazy experimentŌĆØ weŌĆÖve embarked on.

Is it time to panic? The question was chosen with a nod to Greta Thunberg, who has said she wants world leaders to panic rather than hope. Natascha Engel, the UKŌĆÖs former shale gas commissioner, said panic was the worst possible response to a challenge on whose broad outlines most reasonable people agree. She reminded us of AustraliaŌĆÖs recent election in which climate change was supposed to be the defining issue. In the voting booths it was forgotten. ŌĆ£How do we take people with us?ŌĆØ she asked.

How indeed? There were mutterings in the room about needing an environmental autocracy, but also confidence in our ability to respond to facts. Clare Brook from the Blue Marine Foundation said the oceans have absorbed nine tenths of the excess heat built up since the 70s, but they can be saviours as well as victims: sea grass meadows, for example, can absorb orders of magnitude more CO2 than trees.

Technology will probably have to be deployed on a massive scale too, in the form of carbon capture and sequestration and / or direct air capture. The object: to remove CO2 from waste streams or simply from the air around us, and store it underground.

James Cameron, former chairman of the Carbon Disclosure Project, warned that the key trends are ŌĆ£non-linearŌĆØ and the numbers ŌĆ£hard to absorbŌĆØ. Maybe this is why the BBC is shifting to a new climate change language that will talk instead about the ŌĆ£transition to a thriving low carbon societyŌĆØ for people who donŌĆÖt speak science.

Back to that question. Is it time to panic? If we mean chaos, no. If we mean a whole new way of doing ŌĆō and regulating ŌĆō business, the answer seems to be yes.

To do:┬Āreport back on sea grass and the high productivity of cold oceans.

There is $130 trillion of private sector capital in the world, and if the human species is to tackle climate change successfully most of that money has to be shifted into more sustainable investments. The question is how ŌĆō and how fast ŌĆō it can be done. Or, as we put it in the title of the morningŌĆÖs key session for investors: what will it cost to get to net zero, and who will have to pay?

There wasnŌĆÖt much debate that this approach suits smart investors, but it left two questions unanswered: what happens to legacy energy companies in the transition, and could they be part of the solution?

Bruce Davis of Abundance Investment echoed warnings earlier this year from the Bank of England: bonds issued by oil and gas companies continue to be bought up by big institutional investors because of their high returns, but they come with high risk too.

ŌĆ£This is a debt problem,ŌĆØ Davis said. Is it going to fuel the next debt bubble? It will if James Cameron is right that the pressures on fossil fuel companies include this brutal existential threat: ŌĆ£Their competitors are going to win.ŌĆØ

The cost of installing renewables is coming down as the cost of exploring for oil and gas and insuring against climate change and an implosion of the industry goes up.

Enthusiasm for a future of ŌĆ£green electronsŌĆØ was palpable. But James Kirkup of the Social Market Foundation and Greg McKenna, CEO of Centrica Storage, brought the discussion back to basics: domestic heating remains the UKŌĆÖs biggest single source of energy demand, and on current trends green electrons by themselves wonŌĆÖt meet that demand for a generation. McKenna said the solution was a wholesale switch from natural gas to hydrogen. Ian Simms of Impax said that one way or another ŌĆ£we need the Centricas and the ShellsŌĆØ for their expertise in moving energy around. Part of the solution, then.

To do:┬ĀInvestigate the looming debt bubble in dirty energy bonds, and the Saudi Aramco IPO. Just how many of our pension funds are queueing up to invest in an energy company that fuels climate change and a regime that condones mediaeval punishment?

This has been the year when Extinction Rebellion elbowed its way into modern urban life and Greta Thunberg found a new way onto the agendas of chief executives ŌĆō via their children. The rise of radical climate activism as a social movement has taken boardrooms by surprise, and its targets include every sector of the economy. Hence our third question: How should they respond?

Complacency isnŌĆÖt an option. Oil and gas companies and carbon-intensive industries like steel and cement may be used to the attentions of climate activists but ŌĆ£the financial sector will not escape scrutiny in the next 12 months,ŌĆØ Sophie Marjanac of ClientEarth warned.

There seemed to be three important pieces of context here: first, ClientEarth is the London-based law firm that has successfully sued the UK government three times over illegal air pollution levels in British cities. Second, the banks that dominate the financial sector lent $645 billion to fossil fuel companies last year ŌĆō a big number if what used to be business as usual is to be relabelled ŌĆ£climate eco-cideŌĆØ in a new wave of prosecutions. And third, Marjanac resists the idea that sheŌĆÖs even radical. ŌĆ£WeŌĆÖre just mainstream litigators,ŌĆØ she said ŌĆō more evidence if it were needed of how fast the mainstream for CEOs are changing.

Business leaders donŌĆÖt always respond well. Pen Hadow, an explorer, told a story of how the website for one of his Arctic research projects was forensically analysed and attacked by a major international PR firm working for an unnamed client anxious to undermine the impact of first-hand knowledge of melting Arctic sea ice.

The head-in-sand approach wonŌĆÖt work for long. ŌĆ£If you are deluding yourself that there isnŌĆÖt a problem, why do you have a reputation for competence?ŌĆØ James Cameron asked. Given the rising cost of insuring against 2 degrees of global warming, never mind 4, itŌĆÖs a burning question.

To do:┬Āinvestigate the outsourcing of lobbying by carbon-intensive businesses to trading associations, and research the 53 climate-related lawsuits now before the UKŌĆÖs courts. Between them they could do as much as Brexit to rewrite the legal framework for British business.

The past 30 years have been a lesson: the fundamentals of climate science have been well understood but fossil fuel use and carbon emissions have risen every year. Which means, among other things, that if the climate emergency is to be tackled without cancelling capitalism, companies will have to change ŌĆō but can they change enough?

They canŌĆÖt change but they can die, said Sacha Deshmukh, CEO of Smart Energy. He said the regulators that are meant to keep them honest arenŌĆÖt much better. The upshot: ŌĆ£a dance of two zombiesŌĆØ in which the issue isnŌĆÖt whether companies can change but ŌĆ£speed of deathŌĆØ.

Bobby Bannerjee of the Cass Business School said the question should be changed to: why canŌĆÖt companies change? In an earlier session, Good EnergyŌĆÖs Juliet Davenport had said big companies were ŌĆ£like organisms that give off antibodies against any threat ŌĆō theyŌĆÖll only change if they absolutely have to.ŌĆØ

She gave an example: it took an existential threat from Tesla to shake VW and its rivals out of their petrol-fuelled torpor.

So there was no shortage of Darwinian gloom, which made Dave LewisŌĆÖs optimism as CEO of Tesco all the more striking.

He told a story about food waste. If food waste were a country it would be the third biggest greenhouse gas emitter in the world after the US and China. His response has been a scheme to make sure 85 per cent of TescoŌĆÖs share of it goes to people who can use it, rather than being burned or thrown away. And the scheme is so popular with staff that he couldnŌĆÖt scrap it if he wanted to.

ŌĆ£IŌĆÖve seen how you can systematically change a company,ŌĆØ Lewis said. More broadly, he said investments in ESG reforms (environmental, social and governance) are now ŌĆ£need to have, not nice to haveŌĆØ.

Others, like Sunni Chauhan of Tulchan, said theyŌĆÖve seen a sudden change in senior executivesŌĆÖ attitudes in the last six months. ESG conversations are no longer a cue for eye-rolling. Stakeholders are all pushing companies in the same direction ŌĆō the right direction.

Does this mean the market has correctly judged the risk that climate change poses to business as usual and is adjusting the rules accordingly? Not exactly, Susan Hooper said. The last thing businesses want is regulation, but ŌĆ£climate change has changed the way we live our lives. You have to have all of us doing the right thing together, and that means regulationŌĆØ.

Another reason for intervention is a system skewed in favour of the big polluters. As one FTSE sustainability veteran put it: ŌĆ£Oil companies have a disproportionate amount of cash to spend, and if thatŌĆÖs spent in support of the status quo youŌĆÖve got a system problem.ŌĆØ

Conclusion: weŌĆÖve got a system problem. We probably have the collective will and ingenuity to fix it but political leadership of rare vision and determination will have to show the way. Business leaders are waking up to their responsibilities ŌĆō but that wonŌĆÖt be enough. They want the goalposts moved as much as anyone.

To do:┬Ātake a look at the Companies Act to test arguments for making limited liability contingent on good corporate behaviour. And the big one: sort through the hogwash and the greenwash to come up with a robust strategy for fixing that system problem without putting civilisation into reverse. 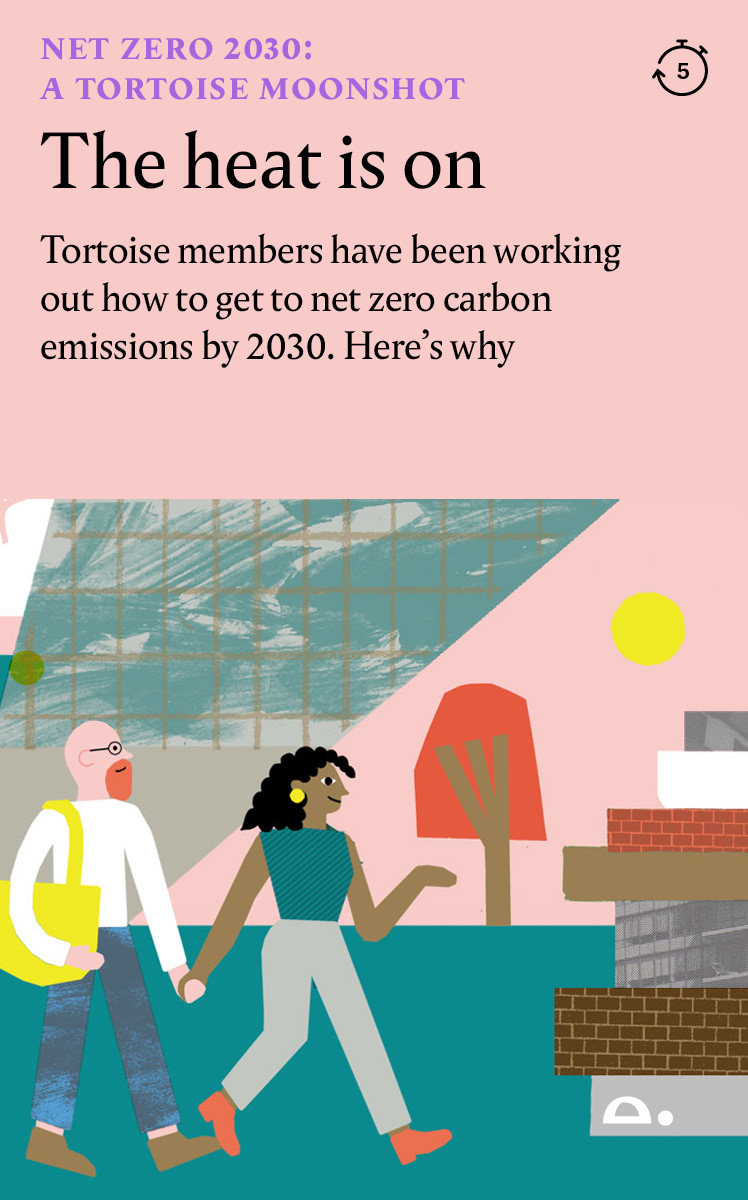 The heat is on

The heat is on

Tortoise members have been working out how to get to net zero carbon emissions by 2030. HereŌĆÖs why