We’ve long heard the cliché of “sculpting the body”, a phrase that conjures up the idea of the gym as an artist’s studio in which the physical form is honed and buffed, chiselled to perfection. In our social media age, it is a short step from that to the idea that Instagram is the art gallery in which these self-made works of art can be hung.

There is a thriving industry of influencers who display their perfectly ripped bodies on social media. But there is, alongside this, a growing number of men who post updates on how many reps they do and how buff their bodies look on a daily basis.

These pictures, of shirtless, shorn chests and bodies, are posted for the eyes of other men – comparing regimes, exchanging tips and generally inviting approval. It may resemble gay culture, but these men are straight and their motives are not sexual but aesthetic.

The award-winning poet Andrew McMillan has watched the trend grow and is intrigued by the homoeroticism in these images, however unintentional it may be. He is also fascinated by the gulf between the perfect selves we create online and our “real” selves that can’t always match up to these digital ideals. Arifa Akbar, editor

The rise of cheap gyms over the past decade coincided with the rise of social media. Platforms such as YouTube and Instagram have allowed people to document the “progress” they are making on their bodies.

Looking at it from the perspective of a gay man, it appears to me as if Instagram, in particular, has created a new space in which self-identified straight men can safely admire, and comment on, the bodies of other straight men; a space in which the viewing and admiring of the male form is a homosocial rather than homosexual pursuit, though it is certainly homoerotic.

Like all things, this isn’t entirely new. Its roots stretch back to the 20th Century, during which the “Grecian Guild” pervaded muscle-magazine culture and acted as a clandestine veil for homosexual body appreciation in the United States. Such guilds provided spaces where “fellow Grecians could gather regularly to pursue those interests which bind us all in one great brotherhood”, though there was also a realisation that “their vision was utopian”. The writer, David K. Johnson observed that members of the Guild “from around the nation would meet at annual conventions and return home to form local chapters”; in other words, they would exchange tips on, and visions of, the “perfect” male body.

In the Instagram age, beneath the top layer of influencers who have managed to monetise their physiques and work-out regimes and build successful careers from their online personas, there is a strata of young men posting their daily progress and writing in-depth captions about what they did that day, what they will eat, what meals they will be preparing…

The comments on these images are fascinating to read: beyond the usual bots, or fitness-wear accounts looking for views, what one generally finds is other fitness enthusiasts offering encouragement. There are comments praising a particular technique, or the progress made on a certain muscle group; gorilla, fire and fist emojis are common; the general atmosphere is one of brotherly appreciation and encouragement.

What I always expected to find more of, but never did, were comments from women admiring the bodies of the men (I always presumed that’s why the pictures were posted). Those exist, but seem to happen infrequently. What is presented is actually a series of photos of straight men, nearly always topless and frequently just in their underwear, and other men commenting on their appearance.

While there is still traditionally masculine behaviour on display, which might be seen as intimidating to non-straight interlopers, the intersection of gym culture and social media has essentially yoked together the world of straight men and gay men; both presenting images of themselves and hoping that other men find their bodies worthy of praise. There is obviously a desire to be attractive to people they might hope to attract, but that often seems secondary to getting the approval of peers; the creation of a community built around the body – it’s something the queer community might recognise as well.

The fact that this community exists in a virtual rather than physical space is also key. In the sterilised vacuum of online communities, the straight male gaze can be turned on other straight men without fear of it being considered homoerotic (though of course it is), because the void of the internet can never be reached across. The hands always hovering just above the body, but never able to make contact with it.

Roland Barthes, in his seminal book on being photographed, Camera Lucida, begins a chapter with the musing: “It can happen that I am observed without knowing it.” This might have been true at the beginning of the 1980s, when he wrote it, though perhaps not anymore; the prevalence of CCTV and, more recently, facial-recognition technology deployed in public spaces means that we are almost always being watched in some way.

This has been further compounded by the twin phenomena of reality TV and of social media. Where Barthes could still imagine an innocence of being accidentally observed without his knowledge, now we all assume we’re being watched all the time. Whether we are being observed or not, we always assume that a pair of eyes are scanning our bodies, however digital this process may be.

Barthes goes on to describe a sensation that any Instagram-obsessive will recognise: “Now, once I feel myself observed by the lens, everything changes: I constitute myself in the process of ‘posing’, I instantaneously make another body for myself, I transform myself in advance into an image. This transformation is an active one: I feel that the photography creates my body or mortifies it.”

That notion of making another body for oneself is a fascinating one; nowadays it would mean paying attention to the lighting, working on certain filters and effects. It suggests that the moment of the gym selfie, rather than the work in the gym itself, is what creates the body. If indeed it is the gym selfie posted online rather than the real self who is to be seen by friends and followers, then this would seem to be true.

Something else that social media and camera phones have added to Barthes’ notions of photography is the fact that the photographer is no longer a separate person. If the physical transformation that is sought is not working as well as one hoped – the workout in the gym is not getting one as close to or as quickly to the ideal body which is desired – one can simply turn the camera on oneself, become one’s own photographer, and create the body that way, augmenting and touching-up as we go along.

Barthes writes: “What I want, in short, is that my (mobile) image, buffeted among a thousand shifting photographs, altering with situation and age, should always coincide with my profound self.” I wish this could be true of any number of the men that I see in the gym each day, and of myself as well. What so many of these men hang their altered and manipulated selfie up in the gallery of Instagram, what I think they ultimately strive for is for their actual self and their desired self to one day match up; for the body that takes the photograph, and the body that the photography creates, to become joined.

Of course, they never can be, and that gap between the two is where a lot of men fall down. They feel their photographed, displayed selves get all the attention and admiration. Where does this leave their real-life selves, and how can the two ever be reconciled?

Roland Barthes’s Camera Lucida is a seminal and vital work about our contemporary condition, which, like all great literature, feels as though it could have been written yesterday.

David K. Johnson’s Buying Gay is a fascinating academic study of the world of physique magazines and their contribution to homosexual culture.

JJ Bola’s Mask Off is a short selection of mini-essays exploring the key points and concerns which face masculinity in the contemporary age. 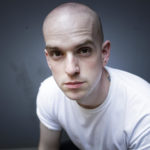 An award-winning poet and writer, as well as a senior lecturer at the Manchester Writing School at MMU. His debut collection, ‘physical’, was the first ever poetry collection to win The Guardian First Book Award. His second collection, ‘playtime’, was published by Jonathan Cape in 2018 and won the inaugural Polari Prize.