Marcel Proust famously bit into a madeleine dipped in tea and was transported back to long lost years. He went on to pen seven novels on time passing and recovered memories. In the first volume, Swann’s Way, the French author muses: “When nothing else subsists of an old past, after the death of people, after the destruction of things, alone, frailer but more enduring, more immaterial, more persistent, more faithful, smell and taste remain for a long time, like souls remembering, hoping, waiting…” So profound, so true.

At a time when notions of identity, home and belonging are become increasingly contested, we wanted to look at what brings us together without erasing our differences.

We found the answer in food: it is at once a universal that unites us and a feature that makes us culturally distinct.

Yasmin Alibhai-Brown’s story of putting down new roots in the kitchen and beyond, is a first, and fine, example in a series we are launching on food and belonging. Rather than grappling with abstract definitions of Britishness, we hope to present concrete incarnations of the range, breadth and richness of all that the modern British identity can encompass. Arifa Akbar, editor

Many sincere Brexiters, for example, look back wistfully to periods of solid community bonds and plain English food. One of them, Bill, an old farmer told me in 2017: “You don’t understand. When I smell curry, I smell defeat. We English won the war but lost the peace to people like you.” I do understand Farmer Bill. Recollections of le temps perdu play over and over in my head too. For those who have left behind birthplaces and homelands, the remembering, waiting and hoping never ends. And food stirs up deep-seated, emotional recollections.

I still see those humiliating notices in our school yard in Kampala, Uganda, put up by British administrators: No Vernacular Languages Permitted; No Smelly Food in Lunchboxes. Such rules were designed to make us feel inferior, unworthy, ashamed of our heritage.

When I was a head girl, I got to meet the big, intimidating, gun-toting General. I asked him audaciously why there were no Asians in the army. He snorted: “Because you immigrant people eat choroko. So you are weak. Not strong like Africans. You are not Africans.” (Choroko is the Swahili word for dhal, Indian lentils.) Food, this time, was used to articulate black nationalism.

In 1970, as anti-Asian hostility intensified, my family left the country and settled in London. I stayed on to finish uni. In May 1972, days before I was flying off to the UK, an urgent letter arrived from my mum Jena: “Bring all this. Can’t get anything in this place. Pack in newspapers.” The list included turmeric powder, tamarind, coriander, cumin, utensils made by Abdullah, a pavement metal worker, and a coconut grater, made of two slabs of wood with a sharp blade on the front. African servants sat astride it and often cut their hands on the serrated edge. If their blood dripped on the white coconut flesh they were berated by the brown mistresses. This object, still wrapped in old newspapers, is a memento of how racist we Asians were towards black people back then.

In the UK, in the early seventies, as Jena found, ingredients for Indian cooking were hard to find and money was tight. Mums made baked bean curries, sardines in masala sauce, spicy boiled potatoes which we scoffed with ketchup. I remember the day Jena came back with a small bag of bhindi [okra] she’d found in Shepherd’s Bush market. And the first pot of fresh coriander she grew. Ugandan exiles, all British subjects, were subjected to relentless verbal and physical abuse. Enoch Powell was a hero then. Our neighbours in Ealing called us “stinky pigs”. The kitchen window was smashed by one of the sons. One day, Jena offered them freshly baked nankatai, wedding biscuits she was making on the day I married my first husband. They took a whole lot and stopped the harassment. Every refugee, migrant and immigrant has such unforgotten stories.

Settlers from the east and south who set up the first restaurants had to put up with loutish, white diners who scoffed the food, drank too much and jeered at the staff or beat up waiters for entertainment. That Goodness Gracious Me sketch, Going Out For An English, raises bitter laughs among Asians in the restaurant trade. Some tell me that since Brexit, that rough racism is coming through the doors again.

Food holds and sensually animates the histories of nationhood, colonialism, resistance, independence, migration, settlement, civil rights, identity conflicts, social and cultural mobility. It is also a social barometer, an indicator of change, shifting identities, good and bad human encounters. Here are some little known facts: an Englishwoman, Hannah Glasse, published a cookbook with Indian recipes in 1747 and Sarah Shade, working-class and English, went off on a wild adventure to India in 1796, coming back a few years later and opening the first unofficial Indian food takeaway in her small flat in London. A Muslim entrepreneur, Sake Deen Mahomed opened the Hindoostance Coffee House in London in 1809. It served “Indian dishes, in the highest perfection.” That venture failed but he later set up a hugely successful Indian massage parlour in Brighton which attracted rich, aristocratic clients. Meanwhile, Abdul Karim, Queen Victoria’s Muslim servant, cooked curries for her using spices he had brought from Agra. He became her closest confidante. The establishment was scandalised. These stories prove little Englanders have always been drawn out of their small lives with delectable dishes.

Food is the first gift brought by new arrivals from elsewhere. It is almost always happily received. There are pivotal moments when “foreign” food becomes naturalised. Remember that speech when the then Foreign Secretary, Robin Cook, declared chicken tikka masala was a “truly British national dish”? In one important sense, this is a positive tale of migration and settlement. However, genuine acceptance, equality and mutuality take longer or never emerge. As Mr Carson, a retired railway worker from Jamaica said to me: “They like our jerk chicken but don’t treat us right. We live with wounded hopes.”

In a recent interview, Madhur Jaffrey said this: “It’s not as if I didn’t want to write about Italy and France. I wanted to. But they wouldn’t let me.” She saw plenty of books and articles on Indian food authored by white writers, but she, being an Indian immigrant, was obliged by gatekeepers to stay within her allocated ethnic enclave. She had to learn that: “Certain kinds of books can only be written by certain kinds of writers.” Think about this. This award-winning actress and pioneering foodie brought Indian cookery to million of rapturous fans in the west through her books and TV programmes. Now 85, still authoring cookbooks and, even rapping, Jaffrey clearly and understandably feels aggrieved.

She personifies the complicated, uplifting, yet vexed story of global movements of the people and culinary exchanges. Like millions of us, she recreated her much missed homeland in her kitchen and used delectable dishes as currency to win people over ( I still do that). But we must always remember not to overreach ourselves, not to presume we are equal to natives. And not to lay claim to European cuisines. How can we not do that? Britain, Italy, France and Spain influence the cultures and foods of black and Asian settlers. Europe is now part of who we are.

I cook fresh dishes almost everyday. It marks the end of my working day and a whole lot more. It calms down this too often overwrought journalist and author. Through it I express my true, inner, complicated self and histories, release my creativity and bring back those I loved, now long gone. I have changed so much, but making, say, the kuku paka – coconut chicken, a traditional East African Asian dish – I see myself as I was back there, and think of what might have been. A Nigel Slater recipe, simple and fast, on the other hand, makes me feel like a proper Londoner, the most precious part of my identity.

When I invite people to eat round our large table, I claim my place, my right to belong and also encourage affinities, intimacies, new kinships. Over those hours, Jewish and Muslim diners have become besties, a Brexiter has left feeling doubts about leaving and those who say I am too “controversial” get to know me better. Guests almost always say something intangible happens in that room, round that table, as they gather and tuck into dishes which might be Indian, Ugandan, Persian, old British, Arab, and/or European or glorious blends and melds.

Migrants are increasingly adopting western diets and absorbing health messages. That leads to intergenerational arguments and reveals the strains between traditional and contemporary values. For example, Asians in their 20s and 30s have given up ghee, clarified butter. Our elders resent these modern impertinences, feel we are disrespecting their ways. Our children, in turn, often refuse to eat home cooking because they too feel ethnicity is a burden. They want to be like white kids. They want to eat burgers, chips and pizzas. So mums make them spicy burgers, chips and pizzas. That usually works.

In recent years, new dilemmas and disagreements have emerged. These can be between authenticity and invention or, more seriously, ownership. My Asian newsagent, a learned man who went to a minor English public school, is well integrated into his London suburb, yet guarded too: “These white people are very kind. Better than our people sometimes. But you must be careful. When you trust them too much, invite them to lunch, they will take over the kitchen, the house and the street. Like they took America and India.”

As chefs have become celebrities and millionaires, food is becoming a fraught and contested field, and, unfortunately, yet another demonstration of unyielding white power and appropriation. Top white chefs brazenly write as if they own Arabic, Indian, Caribbean, Thai and Chinese cuisines and TV bosses shamelessly commission series which reek of colonial arrogance – think of Gordon Ramsey’s India and Rick Stein’s rambles across Turkey. We have brilliant cooks and chefs of colour. They do not get to make these programmes and you would never, ever get the brilliant chef, Vivek Singh, presenting shows on Scottish or Cornish food.

But our young are indefatigable. They enter Masterchef competitions, set up restaurants and refuse to bend to white power. One young female restaurateur told me: “We are over post-colonialism, and all that moaning. My parents do that still. We will beat the Brits at their game. They cannot do without our food. That is our power. Remember, even racists love Indian food. And we charge them a lot. For the taste, the ingredients and all that past unfairness.” Good luck to them.

Our mums used to fry the onions and chicken. We, being health aware, have modernised the recipe.

A whole chicken, cut into pieces or just thighs. Skinned

A bunch of spring onions

A bunch of fresh coriander 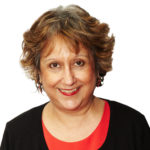 Award-winning journalist, broadcaster, author and columnist. She has written for publications including the Guardian, Sunday Times and New York Times. She has won several awards including the Orwell prize for political writing and the National Press Awards columnist of the year