There is no Istanbul. There are Istanbuls – co-existing, clashing, competing. With a population above 15 million, this city is an economic, political and cultural powerhouse. By itself, Istanbul contributes a third of Turkey’s GDP. Equally striking is its symbolic value. “If we lose Istanbul, we lose Turkey,” said President Erdogan while addressing a group of lawmakers in 2016. When he did lose Istanbul to Ekrem Imamoglu from the main opposition party, CHP, in the local elections this March, however, his ruling AKP party, simply annulled the results.

Europe raised concern when Turkey’s Supreme Electoral Council convened to annul mayoral elections after an opposition candidate won earlier this year, and have a re-run this month. Many saw it as yet further evidence of a nation drifting towards dictatorship.

Elif Shafak, an award-winning novelist and recipient of the Chevalier de l’Ordre des Arts et des Lettres, has in the past boldly faced censure from the Turkish government for her writing. Earlier this month, the government announced that she was again under investigation. Shafak remains as undeterred as ever. Here she reflects on what the June elections may mean for Istanbul, and Turkey. Arifa Akbar, editor

Imagine a country where almost the entire media is controlled by a single narrative. Imagine a country where there is a persistent crackdown on civil society, academia and social media. Every Turkish journalist, writer, academic or intellectual knows that because of a few words, you can easily get into trouble. A tweet might be enough reason to be detained in the middle of the night, a poem might be treated as a crime, a novel might land you in prison.

According to Professor Yaman Akdeniz, from Bilgi University, in the last five years alone 66,691 investigations have been launched for “insulting the president” – a crime punishable with up to four years in prison. Among those prosecuted were high-school students. Then, imagine a country where the opposition does not have an equal voice or comparable resources and one of the leading opposition figures, Selahattin Demirtas, the former co-chair of the opposition Peoples’ Democratic Party (HDP), is still in prison. Despite these circumstances, around half the electorate in Turkey continues to vote against the government. This is a testimony to the complexity of this country.

In the highly-attended March local elections (voter turnout was just under 85 per cent), Turkey’s authoritarian government did not only lose Istanbul. They also lost control of all major cities, including Ankara, Izmir and Adana. But it was only in Istanbul that the Supreme Electoral Council, after pressure from the government, declared the outcome void. The decision was not only unlawful and undemocratic. It also defied all logic. Every voter cast four ballots – electing the mayor as well as members of the provincial and municipal councils. Of the four ballots placed in the same envelope, only the fourth – the mayor’s – was cancelled.

The whole thing is so preposterous that the government finds it hard to explain it even to their own electorate base. The Turkish lira – already weakened – plummeted further. The European Parliament’s Turkey rapporteur, Kati Piri, underlined that this “ends the credibility of democratic transition of power through elections”. Since then there has been a tense waiting period. Many citizens remain suspicious as to whether the rerun will be fair and free.

Meanwhile, the AKP, in alliance with the far-right MHP, launched a vitriolic attack campaign against Ekrem Imamoglu, who served as Mayor of Istanbul from April to May 2019. These attacks were not as much against his policies and politics as against his personality and identity. He has been accused of all sorts of made-up terrorist charges in pro-government papers. The latest slander is that he is supported by Greek media and that he might be a secret Pontiac Greek. The story of the Pontiac Greeks is yet another big silence in Turkey’s official history. One of the oldest inhabitants of the region, they were forced out of their homeland during the late Ottoman Empire.

Being different is difficult in Turkey. Being a minority even more so. The xenophobic rhetoric uses words like “Armenian”, “Jew” or “Greek” as though they were insults. The accusation also implies that the person concerned is a pawn of foreign powers. In a country where democracy is scarce, conspiracy theories abound. The whole thing is particularly insane given the fact that the Ottoman Empire was a multiethnic, multilingual empire. Today’s Turkish citizens have a diverse ethnic and cultural heritage as a result. But instead of celebrating this diversity, the ultranationalistic Islamic alliance continues to attack people on the premise of not being “pure Turks”.

The ruling elite’s anti-Greek rhetoric is not only despicable and shameful, it is also inherently sad given that the two cultures are, in truth, very close. When the Istanbul earthquake happened in 1999, Greece was among the first countries to send aid, and when another earthquake occurred in Greece later on, similarly, Turkey was among the first countries to help. Throughout the early 2000s, along with a wave of democratisation and the prospect of EU membership, there has been a new narrative of peace and co-existence. Today’s acrimonious language shows how far we have gone backwards.

On the other hand, in the face of the attacks, Imamoglu’s response has been remarkably positive, inclusive and constructive. “We have a culture that respects 82 million citizens living in this country regardless of ethnic origin.” When he went to the Black Sea region to visit his family for Eid celebrations, he organised a political rally attended by massive crowds, cheering and rooting for him. Thus far, the defamation campaign seems to have totally backfired. More interestingly, people started to see him not only as the legitimate mayor of Istanbul, but also as a potential national leader who could unify Turkey’s divided opposition. Suddenly, the stakes have been raised even higher.

Contrary to the government’s populist demagoguery and increasing truculence, Imamoglu is soft-spoken. He spreads optimism – a rarity in Turkey. “No one can prevent this nation from having freedom and democracy,” said Imamoglu. “Never lose your smiles. Never lose your hope in your hearts. Be together with me. I love you. And you will see, everything will be fine.”

#Everythingwillbefine is trending on Turkish social media. Artists, singers and writers have come forward to express their support for Imamoglu. For the first time in a long while, there is a breeze of hope. But the climate of intimidation across the country is too intense to ignore. On 23 June, about 10 million Istanbulites will vote again. If the elections are fair and free, there is a big chance Imamoglu will win again. The AKP can still try to control Istanbul Metropolitan Municipality by limiting their budget and resources. Even so, if Imamoglu is re-elected it will be a massive boost for Turkey’s long-depressed democrats.

While no one can predict the outcome, the polls show Imamoglu ahead in the race. Once again Istanbul proves that it is more than a city and it increasingly looks as if the upcoming rerun will have an impact beyond local elections.

For penetrating analysis of Turkey’s ‘strongman’ president and his politics, it is worth visiting Sonar Cagaptay’s The New Sultan: Erdogan and the Crisis of Modern Turkey (2017).

Bettany Hughes’s Istanbul: A Tale of Three Cities (2017) takes us on an epic historical journey to its Roman, Byzantine and Ottoman past.

Istanbul: The Imperial City, is a penetrating study of the metropolis by John Freely.

For memoir, there is Orhan Pamuk’s majestic Istanbul: Memories of a City (2006) in which the Nobel-prize winning novelist winds his story deftly and inextricably with that of the city of his birth.

For more literary insights, there is Burhan Sönmez’s third novel, Istanbul, Istanbul (2015) for which the Turkish novelist won the EBRD Literature Prize in 2018.

Or if you relish more by Elif Shafak,  her newly published novel, 10 Minutes 38 Seconds in this Strange World  tells the story of a sex worker and her wonderful group of friends, all outcasts – her water family. Shafak’s bestselling 2006 novel The Bastard of Istanbul was longlisted for the Orange Prize and is considered to be the first Turkish novel to deal head-on with the Armenian genocide. Shafak faced charges of “insulting Turkishness” and her Turkish lawyer had to defend her Armenian fictional characters in the courtroom. 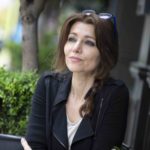 Elif Shafak is an award-winning British-Turkish novelist with 17 published books, including 11 novels, and is the most widely read female author in Turkey. Her work has been translated into 50 languages. (Photo by Ferhat Elik)