Ever since the late Roger Deakin swam through Britain by river, lake and sea the term “wild swimming” has been used to describe the age-old practice of swimming in natural waters – river swimming and other outdoor swimming. Wild swimming has a long and fascinating history stretching back through the centuries. Nordic kings and earls of Orkney were famed for their heroic swimming feats and Welsh mercenaries took to the waters in a bid to win the hearts of the women they admired. Water has a healing quality: ancient Egyptians practised bathing rituals in hopes of curing ailments. Research shows that being in water can improve emotional health and mental well-being as well as decreasing anxiety and depression.

Outdoor or wild swimming is one of the fastest-growing adventure sports in the UK. More and more people are realising the benefits of swimming in cold or natural flowing water. This photographic series follows wild swimmers throughout the year; from the hot and dry summer months to the unpredictable cold winter season with water temperatures barely above freezing. The images bear witness to the swimmers and their affiliation with the water and the varying reasons for why they swim outdoors.

Immersing myself in the culture of wild swimming, I spent a year documenting a number of groups, clubs and individuals across the country in order to delve deep into the personalities of these intrepid souls. Unlike the more traditional pool swimmers, wild swimmers are less interested in the competitive side and more in the varying benefits and attributes of open water and its nourishing qualities. It allows the swimmers in this series to completely detach from the mental or physical anguish in their lives, from mental illness to PTSD.

Susie Davies-Lowe is a member of the Rother Bobbers swim club. The group are all retired teachers and swim throughout the year in matching bathers at the Rotherslade beach in Mumbles, South Wales. For them swimming is the ultimate release and a dip in the cold water makes them feel alive.

Jill Porter pushes back off the riverbank at a privately owned lake in Somerset, southwest England,  in July. She says that open water swimming is the best way to unwind after a stressful day.

Under the water at Tenby North beach in Pembrokeshire, Wales, on a hot summer day in July. The area is a popular for outdoor swimming clubs thanks to its sheltered location, water clarity and accessibility.

Andy Wall stands next to his privately owned lake in Somerset, South West England. He is a member of Clevedon swimming club and swims daily, regardless of seasons and weather conditions.

A swimmer at Henleaze swimming club in Bristol, which is exclusive to members, with a two-year waiting list. The swimmers swim year round in the lake for health and fitness.

Martina Watts, a member of the Henleaze swimming club after a swim at the lake  in July.

A member of the Barrybados swimming club at Jackson Bay in Barry, South Wales, in December. The group meet every Sunday throughout the year. Many have suffered with depression and say the cold water takes their minds off their problems.

Caroline Cox, of the Rother Bobbers swim club after a winter swim. The group are all retired teachers and swim throughout the year in matching bathers at the Rotherslade beach in Mumbles, South Wales.

Husband and wife Hazel, left, and Neil Williams take a dip in the lake at Llyn Y Fan Fach, South Wales on a cold January morning. The swimmers find the cold water a comfort from the stresses and strains of routine life.

At Llyn Y Fan Fach swimmers try to get warm in their dry robes (fleece-lined coats) after a January swim.

Makala Doughty, a member of the Bluetits swimming club  in Pembrokeshire, West Wales, is photographed before a night swim in January. Makala suffered with depression and anxiety before joining the club in 2017. The morale and camaraderie of the other swimmers has helped her deal with her problems.

Helen Smith after a swim in the Thames at Henley on Thames, 20 miles from  London. She has suffered with body confidence issues and  other swimmers have encouraged her to embrace her weight.

Hugh Pinney after a swim at  Llyn Y Fan Fach, a high-altitude lake in Wales, on a cold January morning.

Hazel Williams stands next to the lake at Llyn Y Fan Fach on a January morning. The swimmers find the cold water helps to relieve stress. 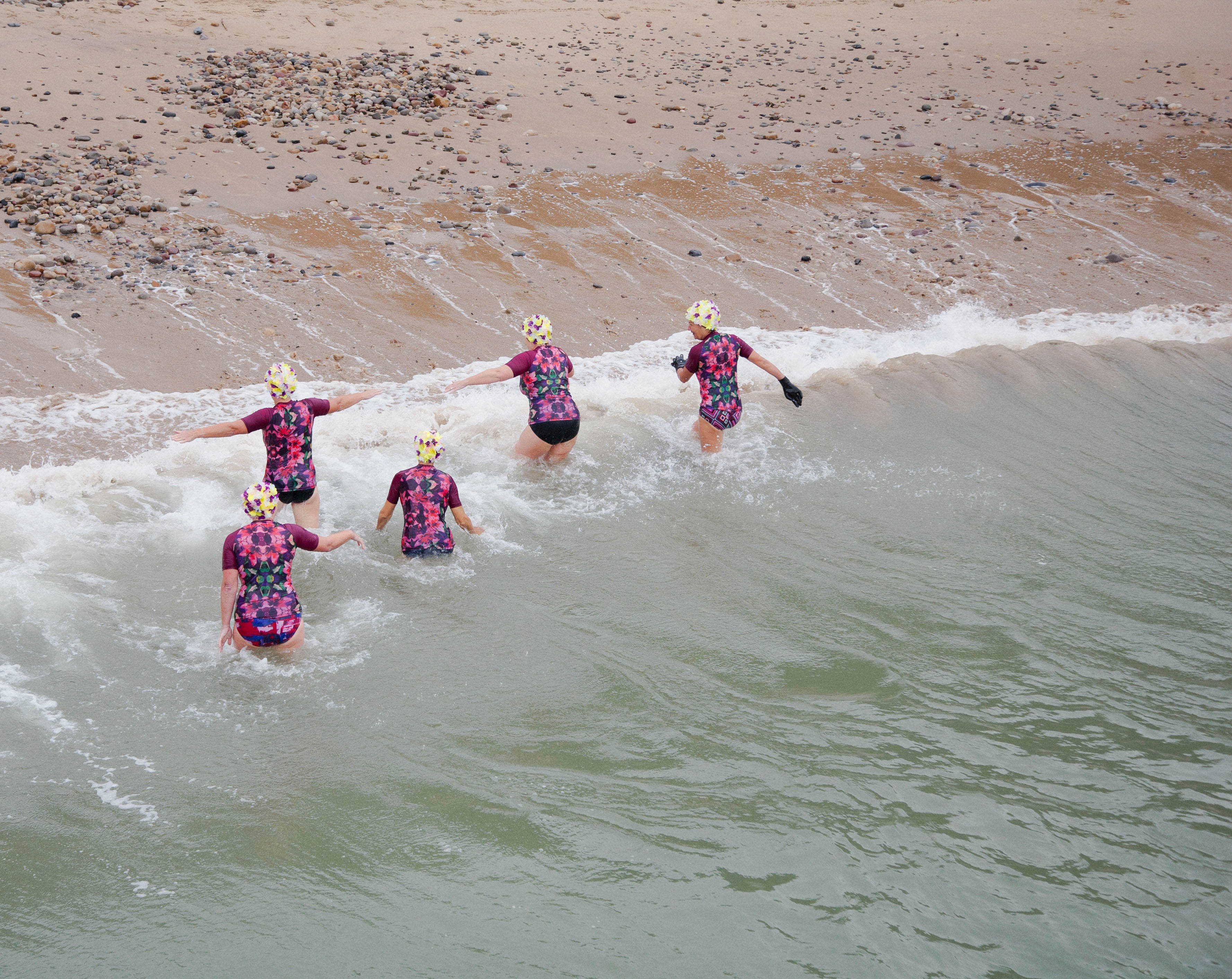 Members of the Rother Bobbers  in their matching bathers leave the sea at the Rotherslade beach in Mumbles, South Wales. 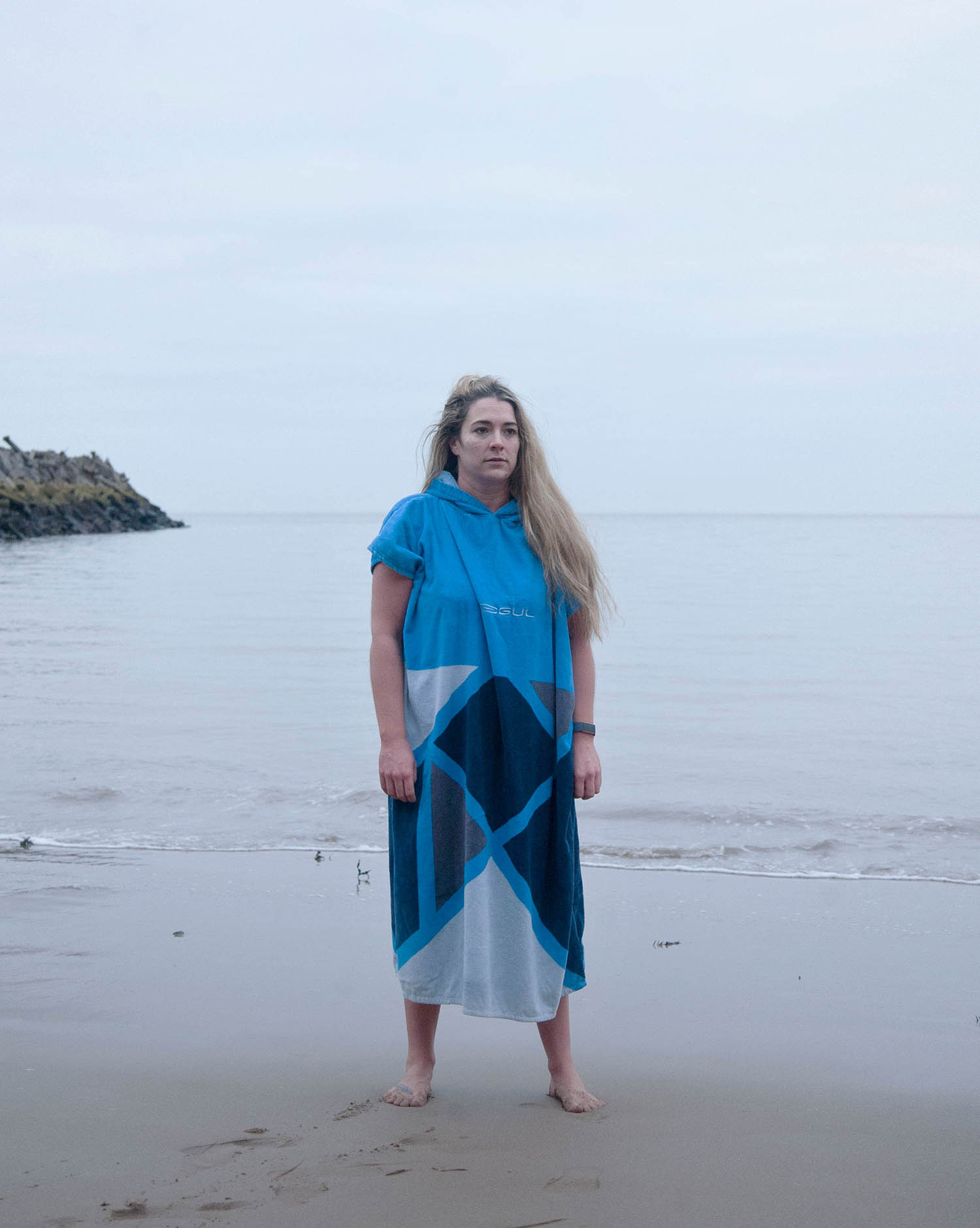 Becca Harvey was almost killed in a car two years ago when she was hit by a drunk driver at 120mph when stationary in her car. She finds swimming in cold water allows her to suppress her PTSD and takes away the pain from nerve damage to her brain. A member of the Barrybados club, she is photographed in Barry, South Wales.

A member of Wiltshire open water swimming club enters the lake at Farleigh in Wiltshire on the coldest day of the winter (minus 10 degrees) in January, 2018. They  meet regularly for swims throughout the county and find the water a place of solace and peace.

Rachel Meredith, left, and Kristy Field, members of the Wiltshire open water swimming club,  on the coldest day of the winter

A member of the Bluetits club wades into the freezing North Atlantic water at Solva harbour, Wales.

Amelia Atkinson, a member of the South West seal pups, on the banks of the river Usk in Monmouthshire, Mid Wales. The group  swim to boost their endorphins and overall mood.

Ice swimmer Cath Pendleton at Keeper’s Pond. Cath has competed in several ice swims – one mile in water  below 5 degrees – and recently swam the English Channel, which took just over 19 hours. She says she is addicted to cold-water swimming.

The South West seal pups before swimming in the river Usk in Monmouthshire.

A member of the Bluetits  sets off a flare to help the others swimmers navigate their way to the exit ladder at Solva harbour.

Richard Nuell, who swims at the Marine lake in Clevedon, Somerset,  used to be scared of open water. With encouragement from other he learnt to overcome his fears and now tries to swim every day to help his arthritis.

Sun shimmers off the surface of the sea at a beach in Holyhead, North Wales. The area has a number of popular outdoor swimming spots thanks to their sheltered location, water clarity and accessibility.

Members of the Gower Swimmers relax after a long swim at Caswell Bay, Mumbles, Wales. The group swim all year round.

A member of the Henleaze swimming club, Bristol, swims at the lake owned by the club, which is exclusive to members and has a two-year waiting list.

Mark is a photographer based in South Wales. He graduated in 2013 with a degree in photojournalism from the University of Wales Trinity St David. His work has been widely featured across the world and exhibited nationwide. His clients include Channel 4, The Telegraph Magazine, The Smith Journal, The Guardian and The Financial Times.

All Photographs by Mark Griffiths/Institute