In the centre of Manchester, roughly equidistant from London and Edinburgh, stands the Royal Exchange. This grand Edwardian meeting place was built for commerce. It serves mainly as a theatre now, but that doesn’t have to be its destiny. There is a strong case for it to be made the new, permanent home of Britain’s parliament.

Parliament has been paralysed by the 2016 referendum. The campaign leading up to it peddled lies about Europe but revealed hard truths about the way the rest of Britain sees London – as overmighty, overcrowded, overpriced and condescending.

This is not just a matter of perception. London is all these things. The country is tearing itself apart because even before 2016 it was perforated along a line around the capital.

Part of the solution should be to move the country’s parliament to Manchester, and reorganise the country in the process. Where parliament goes the ministries, quangoes, regulators and most of the 84,000 civil servants who make government work should follow, and with them the status of capital city.

Some will call this a hysterical misreading of Brexit, but Brexit has become a shorthand for a political and constitutional crisis that will divide Britain for decades if leaders fail to see its true dimensions and match them with real, structural change.

Why now? There is, in news jargon, a peg. Most arguments for moving the capital to Manchester start by pointing out that the Palace of Westminster has become a crumbling symbol of decay. It needs repairs that could cost £6 billion even if the quickest, cheapest approach is taken. A virtue should be made of the disruption and cost of restoring the parliamentary estate, by heaving it out of the London bubble.

There is nothing wrong with this argument. The only point it misses is that parliament needs to move north anyway.

Few big advanced economies are as unbalanced as Britain’s. London houses 12.5 per cent of the UK’s population but generates 22 per cent of GDP. Among major world capitals, only Moscow accounts for a greater share of its country’s economic activity.

Britain’s next eight biggest cities all have lower average incomes than London. Berlin doesn’t even rank in Germany’s top 20.

It doesn’t have to be like this. Think of Toronto and Ottawa. New York and Washington. Sydney and Canberra. Auckland and Wellington. San Francisco and Sacramento. Think of Paris balanced by the Cote d’Azur, Rome by Milan, Beijing by Shanghai, Delhi by Mumbai.

None of these capitals has sucked the economic life out of its commercial partner, and London would have nothing to fear from Manchester. But a country on the brink of serious self-harm would have much to gain: a historic rebalancing of power and a clear view, for the governing class, of what it has to govern.

We commissioned two Manchester University architecture students to sketch the Royal Exchange transformed into the cradle of a reborn British democracy. The first thing they did was to ditch Westminster’s adversarial benches. Where the industrial revolution took hold a political revolution could take root.

The alternative – spending £6 billion to replicate and restore a fusty Victorian palace whose grandest rooms are reserved for an appointed House of Lords, and then go on preaching democracy to the world as if “nothing has changed” – doesn’t bear thinking about. 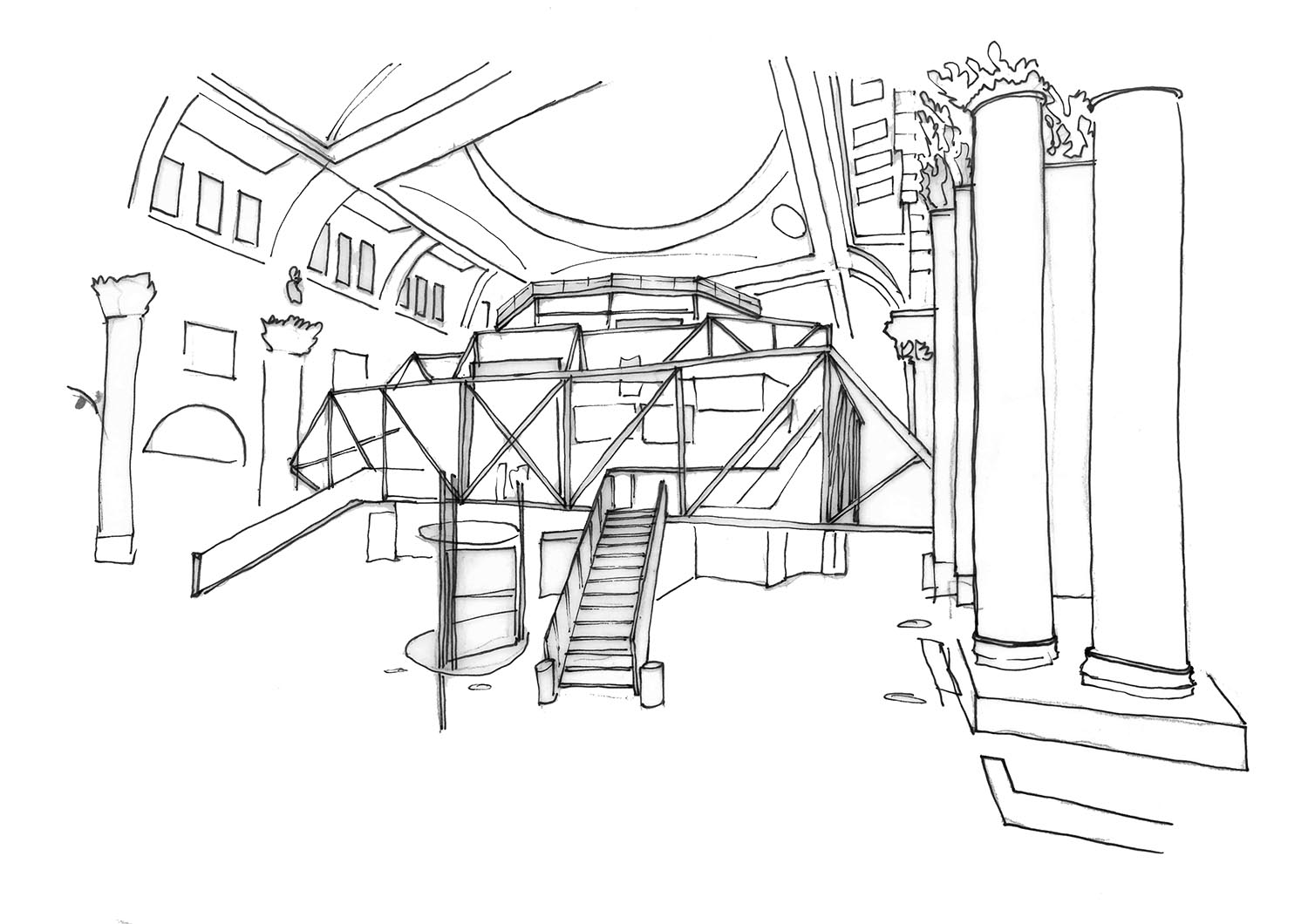 The Royal Exchange was historically used as a meeting point for tradespeople during Manchester’s industrial revolution. In 1976, the Royal Exchange Theatre Company took residence in the building, within their own space-age module that serves as a theatre-in-the-round.

This design pays homage to the Royal Exchange itself and to the theatre it would replace by using many of the same features, such as an inverted dome shape (mimicking the roof) and an unconnected structure (similar to the theatre). Using a basin shape for the chamber would allow for complete movement around the structure.

The main entrance to the new House of Commons sits between the two main pillars. The entrance is also sunk into the basin to allow for a horseshoe chamber rather than one in the round.

The mezzanine floor currently in the structure would be connected on either side to form a balcony to allow for public viewing into the building.

The basin shape allows for a more effective and modern form of debate, replacing the polarising arrangement of the current House of Commons.

“For 30 years or more, governments have promised to regenerate the north, rebalance growth away from the overheated south east. Billions of pounds have been invested; entire civil service careers have been spent mapping and planning and designing initiatives with all the goodwill and ambition in the world… But all this goodwill is fighting gravity and it isn’t working. London and the south east still outstrip everywhere else in wealth and growth. The UK is Europe’s most regionally divided nation. Only when politicians have to go to work every day on the rickety trains of our northern cities will they really change this, and give the north the infrastructure investment it actually needs to grow and thrive.”

“The idea… that you can simply wrap and parcel out parliament like some sort of raffle prize, is absurd. It neglects the fact that parliament is so much more than a handful of MPs in the House of Commons meeting every Wednesday at noon. Parliament is the legislative, political, cultural, and economic capital of the UK… The government has promised to establish up to 20 new public agencies in cities outside of London after Brexit, dedicated to running the country after our expected departure from the EU in March. Not only is this a much more manageable task to accomplish, it would also allow for future investments to be made as these new agencies are created.”

“Like it or not, London isn’t just the legislative capital of Britain: it’s also its political, cultural and economic capital. Pretty much anyone and any organisation which wants anything to do with government, policy and politics has set itself up in London – and they’re certainly not going to relocate to Hull or wherever for six years just because MPs feel guilty about spending billions rebuilding the palace they normally work in.”

“We must move both parliament and the seat of government out of London for good… A 20-year project to build a new northern city of around half a million people could create not only a political and governmental powerhouse but an economic growth centre based on the new technologies – a new silicon valley of the north. The obvious location is somewhere in the ‘concealed’ coalfield belt east of Leeds, Sheffield and Nottingham – on the M1 and linked motorways (and HS2!), in attractive countryside – and with plenty of flat land for England’s new hub airport, which should not be in ‘London’.”